For students who come to our school, having their heads in the clouds isn't a bad thing -- it's practically a prerequisite.

Here at Aviation High School, a public school in Seattle, students must be willing not only to pursue a demanding academic workload but also to explore the worlds of aviation and aerospace. About 200 students have enrolled since we opened last year. Most share a common goal: They want to understand and devour everything about aviation, from the history of flight to the science of engineering and designing aircraft to the mechanics of piloting planes. Others enroll because of our focus on math, science, and technology. Some choose this school simply because it is a small, caring learning community.

The concept for an aviation-themed high school came up while I was principal of the Sea-Tac Occupational Skills Center (OSC), a technical and vocational school in Burien, Washington. The Seattle region has a long history of aviation research and, not surprisingly, at the OSC I heard from many students who wanted to be aeronautical engineers, pilots, avionics technicians, or astronauts. Why, they asked, weren't there programs at the high school level that could get them started?

At the same time, our center's strategic-planning team was conducting a program review and actively considering new course offerings. Members of that team included community members who wanted to see the best practices of career and technical education at the skills center expanded into new teaching and learning models in more traditionally academic settings.

I wanted to help students realize their career goals, but I found that too many came to the OSC in eleventh or twelfth grade expecting to become computer scientists, medical professionals, engineers -- yet they were totally unprepared for the academically demanding pathway of these careers. The passion was there, but that did not always mean they were prepared for the task ahead. I had been principal of the OSC for fourteen years, but this dilemma still kept me awake at night.

In 2000, I sat down with the OSC strategic-planning team, and we asked,"What if we had a learning model that captured the passion of students at an earlier age and totally immersed them in what they were inspired by or loved to do?" We looked at several career themes for models but kept coming back to aviation and aerospace, primarily because that's what the students kept reinforcing that they wanted.

The Pacific Northwest, home to aeronautics companies such as Boeing, seemed a natural place to start Aviation High School. We not only boast incredible resources for the school's students and faculty but, as a region, we also need to cultivate future engineers and business leaders with an interest in aviation. At the very least, we must give students the math and science background that will serve them well in other technology-based professions.

I wanted Aviation High School to deliver the benefits of a small-school education to a group of students who share a common interest and goals. I don't have a background in aviation, but I grew up around small aircraft and a local airport. Most importantly, I had seen firsthand how much difference it makes in classroom achievement when students are passionate about their studies.

The community endorsed the Aviation High School concept and, for the next three years, we refined the idea and gained funding. A design team developed an initial plan, which was revised many times before it was submitted to the Bill & Melinda Gates Foundation in 2002. Disappointingly, the initial proposal was not funded, but the feedback was positive and we were encouraged to resubmit the next year. The second time was the charm, and, in May 2003, we were notified that we would receive $600,000 in funding over four years. 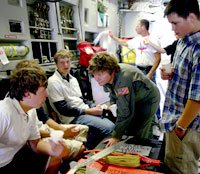 Our application process requires written essays and a face-to-face interview, and students must be committed to a rigorous college-prep curriculum, including four years of both math and science. They also must have a desire to work in a small, personalized learning environment where all students and staff know them well. Because we are a more intimate, focused school, students also must be comfortable with the fact that we don't have the full menu of courses or activities of a comprehensive high school.

We are like mainstream schools in that students take a variety of courses required for high school graduation and college admission. The difference in our program is the commitment to authentic learning experiences through a project-based curriculum. We are not a career and technical school or an academy; we are a theme-based high school that relies on aviation and aerospace to inspire students and prepare them for all that is possible in their lives. Our curriculum is rigorously standards based, and our approach to learning requires students to develop their thinking skills as they apply what they have learned in class to solve problems.

In addition to core courses in math, science, language arts, and social studies, we offer electives such as art, environmental stewardship, forensics, Japanese, and science olympiad, plus a series of seminars focused on aviation and aerospace, including Aviation and the American Character, History of Aircraft Design, and Robotics.

In each course, students complete projects that demonstrate a depth of understanding and skill related to our essential questions and schoolwide learning goals. The more complex projects are developed in collaboration with industry experts, such as a wing-design engineer, a transit planner, an Arctic researcher, and a local river-cleanup coalition. The Museum of Flight, with which we have an educational partnership, provides teachers with learning resources, plus curriculum development and instruction with some seminars. Because the museum is near our campus, there is ample opportunity for collaboration. 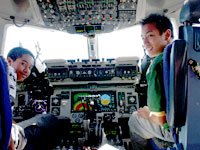 I'm proud of all we've accomplished in our first year, but we still have a lot of work ahead. We have just developed the instructional program for Flight One, for grades 9-10, and have yet to develop the program for Flight Two. This step will involve codevelopment of courses with our other educational partner, South Seattle Community College; creation of an internship program in which students learn workplace skills in aviation and aerospace industries; and development of a senior project and a portfolio graduation requirement.

We were naive when we started, not realizing how challenging it would be without the infrastructure of a regular high school. Not having a library or athletic fields or special education instructors is difficult and requires new thinking for how to meet students' need in these areas.We have also learned teachers must have support and help in designing high-quality projects, which we're addressing by enlisting industry specialists and experts in performance-based learning to aid us.

Some of our goals were overly ambitious and will take more time than we expected. All ninth graders took Private Pilot Ground School last year, which we've come to see is probably better done in sophomore or junior year. A donated kit plane, which our students began work on last year with the help of two engineers from Boeing, was to have been nearer completion by now. But they're still steaming ahead, and we hope the plane will be ready for takeoff by the time our first class graduates in 2008. At Aviation High School, we all know that the sky's the limit.

Reba Gilman is CEO and principal of Aviation High School. Among many honors for her work, Gilman was named Washington state's Vocational Administrator of the Year in 2002.

Go to "How to Build a Theme-Based Curriculum."