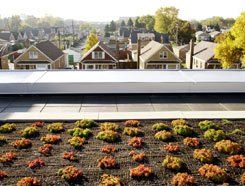 Clad in a tailored gray suit and heels instead of her typical garb of jeans, steel-toed boots, and a hard hat, Julie Chamlin begins her tour of Tarkington Elementary School in the airy atrium. The loftlike space exudes a squeaky-clean feel, with its scuff-free floors and unsmudged windows. The morning sun floods the room with warmth.

As project manager of this newly opened K-8 school on Chicago's Southwest Side, Chamlin -- whose job includes making sure that the three-story, 134,000-square-foot building meets certain environmental standards -- quickly highlights the entryway's so-called green features: understated bluish-green floors made of recycled glass, elegant two-story-high windows that allow for natural lighting, and honeycolored maple ceilings made from wood logged in what she refers to as an "environmentally responsible" way (read: no clear-cutting).

These are just a few of the design elements that give Tarkington its bragging rights. It's the first campus in the Chicago Public Schools (CPS), the nation's third-largest school district, built to meet the stringent green standards established by the nonprofit U.S. Green Building Council, a coalition of 6,000 building-industry organizations that is considered the standard-bearer of greenness. Tarkington will also serve as a prototype for future Chicago public schools, which CPS officials say are all required to be green.

Earning the USGBC's seal of approval, known as LEED (Leadership in Energy and Environmental Design) certification -- which Tarkington expects to officially receive soon -- requires looking at the building process through a different lens.

"It's like baking an oat-bran bagel instead of one with white flour," says Erin Lavin Cabonargi, managing architect for CPS's Department of Operations. (Previously, she worked at OWP/P Architects, the Chicago firm that handled the school's initial design phase.) "You're using the same recipe, only now the ingredients are organic."

And, just as any vegan will tell you, a healthy diet doesn't sacrifice taste. By borrowing from the Chicago palette of rich, durable materials, such as limestone and brick, and incorporating stainless steel hardware and oversize windows, Tarkington projects a rare combination of Midwestern heartiness and urban hip.

"A school is the anchor of the community," says Cabonargi. "Students need to think of it as a place of permanence. The architecture is a manifestation of that permanence."

But schools are more than eye-pleasing assemblages. Beyond making school an aesthetically vibrant and environmentally friendly place, the ultimate goal of those involved with Tarkington, from the builders to the teaching staff, is to instill in students a sense of wonder as well as one of responsibility for their natural environment.

"Curriculum is key," Cabonargi says. "If we can teach students about sustainability, that's the highest praise we could possibly hope for."

Vincent Iturralde, Tarkington's principal, concurs. As a former science teacher, he is particularly excited by how having a green school shapes curriculum and consequently generates an interest in science among the facility's 900-plus students.

Enter Steven Cota, a charismatic science specialist, who with his thirty fellow teachers designs a green curriculum for all grade levels. At Tarkington, teaching science entails a collaborative effort between him and his colleagues. Instead of sending students off to science lab, teachers accompany their classes and team-teach the subject with Cota.

With an abundance of enthusiasm and ideas, he explains how a green school provides fertile ground for his hands-on teaching style. "To raise students' awareness, there must be a physical engagement," he says. "Teachers must make students aware of a reality they're not used to seeing."

So, for instance, Cota encourages kids to see garbage in a new way by teaching a lesson on recycling. He might ask kids to keep all the garbage they generate at a picnic and consider the following: "What does trash look like? What are recyclable materials?" Kids get their hands dirty, so to speak, by separating the two. In one class, Cota created a math lesson by having students display their collective picnic garbage and multiply that amount by seven days.

Similarly, when Tarkington's solar panels are installed on the rooftop, Cota will teach students about alternative energy sources. Likewise, someday, when he has access to an electric car, he'll use the recharging stations already installed in the school's parking lot for hands-on demos.

Peter Templeton, the USGBC's vice president for education and research, considers the indoor environmental quality at schools their most important green feature: "We want to create the optimum environment for learning, one that ensures students can concentrate and be free from distractions."

These include indoor pollutants such as mold, bad air quality and circulation, which often cause drowsiness, and inadequate lighting, known to hamper learning by diminishing a child's ability to concentrate. Also, Tarkington's indoor air quality adheres to a higher standard because of the building's low-toxic paint, glues, and caulking.

In addition, classrooms contain extra-large windows that allow more natural light. Not only that, but sensors incorporated into the lighting system automatically adjust to the amount of sunlight entering the room, thus maximizing the use of natural energy. 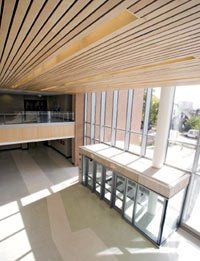 The Windy City and Beyond

Tarkington is not the only school that, well, has seen the light when it comes to going green. In November 2002, Goodwillie Environmental School, in Ada Township, Michigan, and Third Creek Elementary School, in Statesville, North Carolina, both suburban public schools, became the first LEED-certified educational facilities. Since then, 14 others located from Massachusetts to Oregon have followed suit. Now, 145 K-12 schools are registered to earn the green seal of approval. Most, like the pioneering schools in Michigan and North Carolina, are in the suburbs, where construction of new buildings is more likely. That's what makes Tarkington -- located in an urban neighborhood with its fair share of fast food joints and convenience stores -- all the more unique and meaningful.

"To have a school like this built here on the South Side is fantastic," says Tarkington principal Iturralde. "It offers lots of possibilities to kids who really need it in this area." 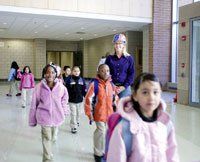 While green features exist throughout the building, the crowning green jewel of Tarkington rests atop its third story. Here, a roof garden of plants from the tundra (ever been to Chicago in the winter?) promises to bloom almost year-round. The plot serves practical purposes, too: This covering of vegetation offers insulation that helps moderate the building's temperature, which is expected to help the school save on cooling expenses in warm months and heating bills in the winter. Large windows open up to this area, allowing students to observe and learn about the life cycles of plants.

The garden covers one-third of the roof; the remainder consists of a white coating (as opposed to the typical black tarred surface) that reflects light and consequently prevents it from turning into heat. By reducing what's known as the urban-heat-island effect, a common problem plaguing cities, air-conditioning costs will be lower than usual. The roof also boasts a storm-water management system, with pipes that feed clean runoff water directly into a lagoon adjacent to the school.

From the initial planning phase, which began in early 2002, to the March 2003 ground-breaking ceremony to when the school doors opened this September, Tarkington's design and building team adhered to the USGBC's requirements. This checklist is designed to examine all aspects of a building to determine whether it uses natural resources efficiently and with little impact to the environment, while also providing an indoor environment that makes for healthy and productive occupants.

So, for example, at Tarkington, one-fourth of the building materials came from within a 500-mile radius of the school -- a requirement of LEED certification aimed to minimize transportation pollutants and fuel the local economy -- 90 percent of the structural steel is made of recycled metal, and a whopping 82 percent of the construction waste from the building was recycled. (LEED requires only half of this material to be processed for reuse.) In addition, the school anticipates using one-fifth less water than a regular building because of features such as low-flow toilets. Getting certified by the LEED also lends credence to a building's greenness, making it easier to secure grants in the future -- not an insignificant consideration for cash-strapped schools.

All this came with a $23 million price tag, roughly 6 percent more than a nongreen school would have cost. However, as green proponents argue, these upfront costs must be weighed against the savings of operating a sustainable building throughout the structure's lifetime. (A 2003 study conducted for California's Sustainable Building Task Force that examined the costs and benefits of thirty-three diverse LEED-certified buildings found that most green strategies paid for themselves within three years.) In the case of Tarkington, that life expectancy is a hundred years. If early indications prove true, it will be a very good century indeed.

How to Build Green Buildings