Credit: Getty Images
The World's a Stage: Tech circles can get young thespians from across the country treading the virtual boards. 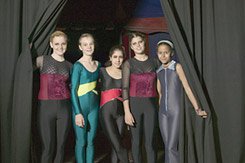 Credit: Getty Images
The World's a Stage: Tech circles can get young thespians from across the country treading the virtual boards.

Imagine three groups of students in disparate parts of the country working together on a common project. Unlikely? Not anymore. High school students in Michigan, New Jersey, and Oregon have, in fact, collaborated on writing and producing plays.

The TheatreLink project, sponsored by New York City's Manhattan Theatre Club (MTC), is an example of a tech circle, in which students from far-flung locations collaborate using the Internet, video, and other distance-learning technologies. In the case of TheatreLink, the focus is on drama, but it could just as easily be math, science, history, literature, or civics.

By now, the technological requirements for building tech circles -- PCs with Internet access and word processing capabilities, a digital camera or a scanner, and a video camera -- should be available in most schools. The majority of high school students have the computer skills they need to use a keyboard, a mouse, the Internet, and email, and to create documents. Many already know how to use tools for tech circles. Projects require access to Internet-connected computers in the classroom or a computer lab, but the students don't all need it at the same time.

At the start of the theater tech circle, students in three schools share photos and biographical sketches on the program's Web site. Students are asked to describe something unique about themselves; this exercise generates a familiarity that provides the foundation for the semester-long project that follows.

The students in each school read the same play produced by MTC, identifying major themes and analyzing scenes and characters. They can ask questions and discuss the work online with the playwright. Then they write original short plays based on themes in the work they've all read, subsequently posting their scripts on the Web site for comments. In the production phase, a play written at one school is produced by a partner school. Production requires constant intersite communication among partner schools and the MTC teacher/artist in New York who oversees the project. Students in each school select actors, directors, stage managers, and designers. The productions are videotaped, viewed on the Web site, and discussed by all participants.

The collaborative format can be extended to almost any subject. For example, more than 1 million elementary school and secondary school students in 15,000 schools throughout the world have participated in an earth science tech circle called Globe. Children use computers and scientific measurement equipment to gather and record data for the Globe database and, using the interactive Globe Web site, create maps and graphs, communicate with peers at other schools worldwide, and collaborate with scientists.

The outcomes of the playwriting project may not rival the work of Tennessee Williams or Arthur Miller, but they are powerful nevertheless. Students from various cultures collaborate with others who have different viewpoints on common projects. Not bad for a day at school.

Milton Goldberg is Distinguished Senior Fellow with the Education Commission of the States. He recently completed a term as the executive vice president of the National Alliance of Business. Dr. Goldberg previously served as director of the Office of Research in the U.S. Department of Education.

Learn more about how teachers use technology, at the Web site of the National Board for Professional Teaching Standards (click on Candidate Support and Higher Education Initiatives, then on Digital Edge).