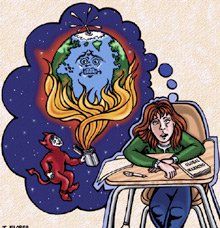 Last April, while chaperoning my daughter's field trip, I mentioned to a fellow parent that I was going to visit Ms. Jackson's class to talk about climate change. Another parent, not involved in our conversation, gasped and lunged toward us. "You're not going to talk to the class about climate change," she said. "They'll be petrified!"

On the day I spoke to the class, I arrived early, during recess. Two students were inside, sitting at computer terminals, and when Ms.Jackson reminded them of my topic, they both gave exaggerated negative looks that begged an explanation. They responded with the same message: Climate change is scary, and we don't want to be scared.

Both incidents were reminders that a conversation about climate change is often, really, a conversation about fear. And, to be clear, there is reason for fear. James Hansen, America's leading climate scientist, says if we continue with business as usual, half the species that exist today will be extinct at the century's end. It would be a heartbreaking saga, played out in slow motion during the lifetime of today's fifth graders.

Species loss is only part of the story. I spent most of last year working with eleven retired three- and four-star admirals and generals on a report assessing the national-security implications of climate change. (That work, incidentally, is what led to my invitation to talk with the students.) Their report suggested that water and food shortages, combined with violent weather events, could lead to massive upheavals and instigate conflicts in every global region. These were grown men, all of them battle tested, and they found the news about climate change to be very scary indeed.

What, then, does one say to fifth graders?

Lacking confidence that I might know this on my own, I asked a dozen friends for advice. Their responses brought focus to the one-hour classroom discussion.

One friend said to be honest but selective: Admit that the challenge is great, give them one or two examples of consequences, and focus on good things that are happening. This was helpful. The honesty built trust with the students, and talk of political momentum lightened the discussion.

Another friend suggested I give them something easy to do, something a bit more difficult, and something very challenging for "homework." This helped engage kids at different levels. For an easy task, I asked them to replace one incandescent lightbulb with a fluorescent one. For a midrange task, I suggested putting up a clothesline in the backyard and hanging out clothes to dry.

For the stretch, I suggested they talk to their parents about dissecting their family's energy bills, comparing next month's bill with the same month last year. If their energy usage and costs went down, perhaps they could split the difference with their parents. This way, it becomes a business for the student, who now has a financial incentive to turnoff the lights, unplug the appliances, and find new ways to save energy.

The follow-up essays, assigned by the teacher, Ms. Jackson, showed that the clothesline idea clearly resonated with the students. In class, wehad talked about how clothes, sheets, and towels feel different when line dried. The students liked the notion that giving up something (the convenienceof a dryer) could also mean they get something (energy savings).

The best advice from friends was to focus less on the details and more on a framework. As the science of climate change gets better, the news gets worse. This generation of children needs a way to process these news accounts; without it, there is every reason to believe they might shut down emotionally or lose themselves in avoidance tactics.

Here, I made a quick point about bad news: It generally assumes we will continue with business as usual, doing nothing about the causes of climate change. That, of course, may not always be so, and these kids themselves can help bring about change. (See "A Climate of Hope.")

The bigger point was to consider what one might say of their generation seventy years from now. I talked of their destiny, at least as I see it, saying that their generation will be the one to develop solutions and help us understand how to live in a changing world. They would do so, in part, because they must. We talked of what it might feel like to be part of such a cause, or to know that their generation and their country would be leading an effort to help protect the planet.

This idea, too, was a focus of the student essays. They liked that they might be part of a movement, and that they might be called to do something great or heroic, that responding to this challenge might give their lives greater meaning. Their words were a reminder of a vital lesson -- one I need to review often: Climate change discussions may start with a sense of fear, but we can, and must, move them toward a sense of hope.

Kevin Sweeney is a management consultant whose practice focuses on climate-change issues and corporate social responsibility.