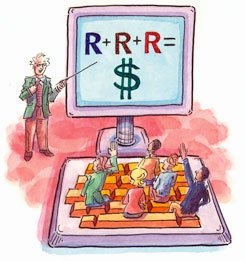 Another year, another budget crisis. Welcome to modern-day public education.

With many schools and districts facing yet another year of fiscal belt tightening -- including the entire state of California, which is reeling in the face of $4.3 billion in proposed cuts to the state's education budget -- teachers, administrators, and parent-teacher associations are once again sharpening their fundraising skills.

"This is the worst budget I've seen in this state's history, and I've been involved for thirty-two years," says Jan Harp Domene, the 2007-09 president of the National Parent Teacher Association and a former California PTA president.

Domene says that outside funds are now "paying the nuts and bolts of what keeps our education system going." This includes teacher salaries, Advanced Placement classes -- even PE equipment.

Teachers have long paid their own money to secure classroom basics, such as paper, pencils, and tissues. And many an administrator has burned up a weekend writing a grant proposal. Meanwhile, PTAs scratch together money with drives that have locals bringing in old printer cartridges, or they ask parents to sign up with local food markets that donate a percentage of sales to nearby schools.

But the severity of the latest budget crisis has many in public education saying that current and aspiring educators need to learn a new skill -- how to raise money. "I don't know of a single program that focuses on teaching superintendents how to raise money, but there should be," says Tim Quinn, managing director of the Broad Academy, a nonprofit organization that trains business executives to lead large urban school districts. "Somehow, we have to find a way to make fund development part of the K-12 culture."

Educators often find themselves fighting an uphill battle. Some people feel that the public-education system is funded adequately with current tax dollars and are reluctant to contribute more. However, only 1 percent of the $295 billion in charitable dollars given away per year goes to public education, says the GivingUSA Foundation and Indiana University's Center for Philanthropy.

People don't expect school and district administrators to raise funds, but Quinn suggests that that expectation change. The funding issue constantly comes up with superintendents-in-training at the Broad Academy, he says, but it never seems to become a priority.

Money management is also key. Superintendents should keep close tabs on where their dollars are going, according to Quinn. He says that districts need, though most don't have, "a really good process for determining which programs don't work and eliminating those programs so they can recapture those dollars for kids."

He also suggests that school leaders could learn more about fund development from local business leaders. "If superintendents could find a way to hire the best chief development officer in their communities on a consulting basis," he notes, "they would raise ten times their salary during the first year."