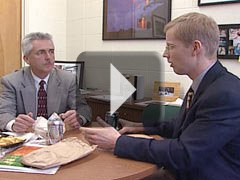 With 40 percent of U.S. school principals reaching retirement age in the next decade, the increasing complexity and pressures of the job, and a growing student population, school districts are seeking new ways to attract and retain effective administrators. One solution has been to provide mentors.

"The job encompasses so much that it's impossible to write down in a job description all the things principals need to do," says Paul Young, president-elect of the National Association of Elementary School Principals (NAESP) and a five-time mentor principal at West Elementary School in Lancaster, Ohio. "The only way for a good transition is to show them the ropes."

Just as the sink-or-swim method often delays mastery of the job for teachers, it can also impede the success and job satisfaction of principals. Recognizing the need for a sympathetic ear and the voice of experience, many principals are seeking mentors on their own since the number of formal mentor programs is still relatively small.

"The principalship is a pretty lonely job," says Young. "Voices stop when you walk into the teachers' lounge -- in not all cases, obviously, but in many. The only person you can talk to freely without any fear of retaliation is another principal."

Cynthia Bazner finished her first year as a principal at Mark Twain Elementary School in Albuquerque, New Mexico, in June. She peppered her mentor, Kirtland Elementary School Principal Peter Espinosa, with questions about the budget, how to effectively observe and evaluate staff, protocol in emergencies, and a host of subjects, confident that Espinosa, a trusted former boss, would be frank and discreet.

Albuquerque Public Schools "is a big bureaucracy," says Bazner. "Sometimes those people don't get back to you for three or four days. Your mentor is somebody who will drop everything they're doing and get back to you immediately."

Most of Bazner's and Espinosa's consultations were by phone, but they also chatted when they met at district functions or at social gatherings or professional development seminars arranged, with the help of local businesses, by Carl Weingartner, retired principal and coordinator of Albuquerque's seven-year-old principal mentor program, Extra Support for Principals (ESP).

Albuquerque is fairly unusual in providing a formal mentor program in which principals receive a $1,000 stipend for a school year of mentoring. Neither Weingartner, who relies on common sense in advising mentors, nor Espinosa wants the program to get too formal, though. Two of its strengths, they both say, are that it is voluntary and that a special trust is built up between the new and old principals. Still, Weingartner emphasizes, the formality of a stipend allows new principals to query their mentors without fear that they are being pests, and it allows an administrator to "look mentors in the eye and say, 'You're supposed to be there for them.'"

"I don't know how anybody can do this without a mentor," Bazner says.

First-year Principal Barbara Martin enjoyed a very unusual mentorship when the NAESP selected her to pose problems she encountered during the 2001-2002 school year to members of the association on an online chat room. She was rewarded with answers that reflected years of accumulated wisdom on subjects ranging from retention and parent-teacher conferences to unmotivated teachers and Year of the Reader projects.

One of Martin's first concerns was getting her staff at North Elementary School in Holts Summit, Missouri, to accept changes she was interested in making. "The mistake first-year principals make is to try to change too much too fast," one veteran principal responded. "After thirty-nine years of experience, I have found that if you select one change that is most important to you and focus on that, your chance of being successful is greatly enhanced."

She also wanted advice on the principal's role in parent-teacher conferences. "I usually sit with all the teachers individually before conferences and ask if there are any tricky ones or if the teachers want me to sit in on any," replied one online mentor. "What I have been doing for the past couple of years during parent-teacher conferences," replied another online correspondent, "is making myself available in a central area. ... I have the recent assessment/testing data with me and I encourage parents to sit with me."

"I had a great first year," says Martin. "I chalk that up to the advice I had online, and I had great mentors here [in the school district]. ... You don't need to reinvent the wheel if you can learn from other people's mistakes."

Kuder has another mentor in Superintendent Jim Bender.

Highs and Lows of the Principalship

Young cites four important skills that new principals need to learn: delegation, time management, ability to see the "big picture," and dealing with all kinds of people. Such skills will help principals cope with what has grown into a highly complex and sometimes frustrating job.

Eager new principals who begin with big plans for immediately revamping instruction and turning the school into a first-class academic institution find that their dreams often take second place to a host of less pleasant endeavors: dealing with an ocean of bureaucratic paperwork; reacting to federal, state, and local initiatives such as zero-tolerance policies for drug abuse and sexual harassment that they may or may not agree with; being aware of the litigious nature of society today without resorting to nonsensical policies to avoid lawsuits; responding calmly to sometimes outrageous parent demands; riding herd on uninspiring or incompetent teachers while maintaining morale among the able and outstanding teachers; working long hours with night and weekend school-related activities, and taking pains to ensure that violence doesn't erupt at the school while keeping in perspective the thought that Columbine could happen anywhere. And financially, it often doesn't make sense to move from master teacher to principal.

"The intensity of the issues has increased," says Tony Bencivenga, principal for eleven years at Benjamin Franklin Middle School in Ridgewood, New Jersey. He particularly emphasizes the propensity by a growing number of parents to head for the courts as soon as they have a disagreement with school officials. "From the parent, there's an increased sense of demand for immediate gratification that wasn't evident in years past," Bencivenga says.

Bencivenga maintains a low-key mentor/friend relationship with his former House Administrator (similar to an assistant principal), Richard Kuder, who was named principal at nearby Dwight D. Eisenhower Middle School in Wyckoff in 2001.

At Ben Franklin, the two found they shared the same philosophy about many educational issues: emphasizing the social and emotional aspect of learning as well as the academic; tying use of technology into collaborative learning and projects; going for the win-win situation, such as meting out consequences for unacceptable behavior while helping the errant student change for the better.

As principal, it's Kuder's job to see the big picture. Here, he joins teachers in planning for a field trip.

"I've never called him and said, 'What should I do?' because I think Tony and I see eye to eye on a lot of things," Kuder says. Their conversations, he adds, go more like this: "What do you think of this?" "Have you heard about this before?" "This is what I'm thinking about this. Why did you think about it that way?"

"What I give him is a framework and support and always let him see the win-win," says Bencivenga. Many principals, including Bencivenga and Kuder, often refer to the need not to lose sight of the "big picture," the idea that what a principal does should not be done in the heat of the moment for expediency, but that all decisions should be made with the long-term welfare of all the children in mind.

"I think that's one of my real strengths [as a mentor]," says Bencivenga, who talks to Kuder regularly on the phone and meets him for dinner now and then. "I have a perspective on things that recognizes the impact of a decision on a lot of people. I know that a decision now is going to have an impact down the road."

"There's always going to be a first year," Kuder notes, adding that much of the first year is about getting to know the staff and understanding the culture of the school. But a fellow principal mentor can make it more enjoyable. He is also full of encouragement and perspective. "I might have lost my sense of humor" without Bencivenga's availability, Kuder says.

Despite the hardships, principal after principal agrees that the rewards of the job can be great, from watching your academic vision produce results to forming relationships with children over a number of years and witnessing student progress in academics and life over an extended period of time, not just one year.

"You get back a real sense of connection to people, to service, to kids, to teachers, to growth -- personal and professional," agrees Albuquerque's Espinosa. "Your life is very full, very rich, very human."