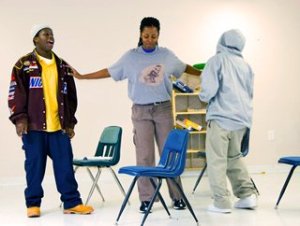 Drive two and a half hours north of Jackson, Mississippi, past cotton, soy, and catfish farms, and you'll find a water tower announcing the tiny hamlet of Sunflower. Located deep in the heart of the Mississippi Delta -- one of the nation's most impoverished regions -- this town of about 600 is isolated and nearly empty of commerce.

But downtown, across from a trailer-sized, abandoned library, is a faded block of buildings that represent promise for the future of the town, if not the whole county. Parked in front of this former commercial strip is the first hint of this unlikely potential: a spotless white van with the logo "Sunflower County Freedom Project" emblazoned on its side.

A basic description of the Sunflower County Freedom Project is pretty straightforward: It resembles many acclaimed supplemental education programs across the country, combining best-practice instruction with extracurricular opportunities such as rigorous after-school academic enrichment, martial arts training, community service, and leadership development to students in grades 7-12.

But in the landscape of the Mississippi Delta, where transportation, field trip destinations, volunteers, guest speakers, and funding are in short supply, the Freedom Project is something very special. Using the county's unique history as a hotbed of civil rights activity in the 1960s as an inspiration and program model, the Freedom Project attempts what to some may seem impossible: to raise Sunflower County's estimated 52.4 percent graduation rate and ensure that each of its participants goes to college -- and succeeds there.

Credit: Katherine Emery
'We're rooted in the past but preparing people to meet the challenges of today and tomorrow.' 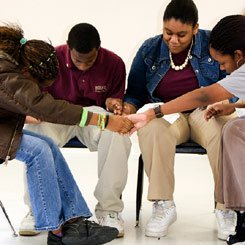 Credit: Katherine Emery
'We're rooted in the past but preparing people to meet the challenges of today and tomorrow.'

The Seed of Freedom

Stepping from the bleak street into the center that houses the Sunflower County Freedom Project is like landing in Technicolor Oz from black-and-white rural Kansas. The walls are painted intense primary colors, and at eight o'clock on a summer morning, dozens of children fill the space, sporting tucked-in sunny orange T-shirts. Executive Director Greg McCoy isn't there; he is on his daily rounds in the van, picking up Freedom Project students from around the county. Frankie Brown, a ninth grader with big brown eyes and a confident stance, steps into the void, shaking the hand of a visitor and conducting a prepared tour. He is well versed on the program's main elements and history.

The Freedom Project was founded by Chris Myers Asch and Shawn Raymond (among others), both Teach for America participants who came to Sunflower County in the mid-1990s. They taught elementary school and high school, respectively, and were disheartened to see smart, curious sixth graders turn cynical and disengaged by the time they reached ninth grade.

In the summer of 1998, Asch and Raymond held town meetings with parents and community members to discuss the possibility of starting a program founded on civil rights ideals that would inspire middle school students. Sunflower County locals, like former teacher Mildred Downey, helped recruit students and design the program; Downey's son Les, a farmer, gave the program its slogan: "Education is the seed of freedom."

With a modest tuition from students' families, and small donations from friends and family members, the Freedom Project ran its first summer school at Mississippi Delta Community College in 1999. Since then, the program has raised hundreds of thousands of dollars from foundations and individuals and has evolved into a year-round program. It managed to buy the downtown buildings, now the hub of Freedom Project activity, always with the goal of expanding opportunities for Sunflower County kids.

Today's Freedom Project was inspired by Freedom Schools, which were held throughout Mississippi in the summer of 1964. At that time, classes were held in homes and churches, and volunteers from civil rights organizations taught students black history, academics, citizenship, and physical fitness. Today's project participants, called Freedom Fellows, join the program as rising seventh graders. During the school year, they attend after-school sessions, Saturday classes, and tae kwon do training, and study at least five books a year with their peers.

In the summer, the Freedom Project holds a modern Freedom School in which first-, second-, and third-year students study academics, media production, public speaking, and tae kwon do. The young fellows also spend a week at the University of Mississippi and go on thematic academic and leadership trips. The more advanced fellows (those who meet program requirements for attendance and participation during the school year) attend summer academic programs or intern with nonprofit organizations or government offices out of the county, state, or country.

The Freedom Project builds kids' skills by looking deeply at Mississippi history and culture. Charles McLaurin, a major figure in Mississippi's civil rights efforts and now a member of the Freedom Project's board of advisers, explains, "We're rooted in the past but preparing people to meet the challenges of today and tomorrow."

In the first two summers, fellows study Mississippians in the civil rights and Civil War eras. Each year, students rehearse and perform plays across the state and region that depict historic events from the Delta. A play created in 2001, A Boy Named Bobo, told the story of Emmitt Till, a black teenager brutally murdered by white racists in nearby Money in 1955. In 2005, students produced a documentary for which they interviewed Delta residents; some discovered previously unknown information about their own families' involvement in the civil rights movement.

McCoy says such work gives students power and motivation to look at their legacy and say, "Now I have the opportunity to continue that legacy by fighting against the norm of typical teenage behavior, of teen pregnancy, of low academic performance and graduation rates. That's why we sing our freedom songs, and that's why we talk about the Freedom Project in the sense that it's a part of the civil rights history."

But along with paying homage to local heroes, the Freedom Project helps students look broadly to the world beyond the Delta. Fellows have college students as summer teachers, and they meet actors, politicians, and civil rights activists. They also travel to camp, perform plays, and go on study tours. Mildred Downey, the so-called grandmother of the Freedom Project, says these experiences are essential so that "more kids would live a life outside of what's here in the Delta -- poverty and food stamps and Medicaid and children -- and live life, see what's there. Then you have choice."

It is the outside trips that draw the youngest fellows. Mykia Clayton, a first-year student hoping to become a doctor, is excited about her first college visit, and about the group's upcoming trip to Montgomery, Alabama, where they'll tour Martin Luther King Jr. sites. "He was a very inspiring person, and if you just think about what he fought for, blacks' rights, that's really good."

Lukendric Washington, a 2007 graduate of the program, laughs when describing the group's trip to Mexico's Yucatan Peninsula. "There's no trip with the Freedom Project where you're actually on vacation and living it up like a star or whatever, but we were able to learn so much about the ancient Mayan ruins and see all those temples and pyramids we'd read about in my eighth-grade textbook." He came back and told friends, "Those pictures we're looking at now in this book? I've been there."

In fact, Washington credits the Freedom Project with helping him get into his top-choice college, the University of North Carolina, on a partial scholarship. Two classes of students have graduated from the Freedom Project -- five students total -- and all five are in college, with three paying nothing. McCoy expects those numbers to grow; students graduating in the next years have been with the program since it transitioned from summer only to year round, and the 2008 class will have six graduates from an initial class of thirteen.

Freedom Project adviser Charles McLaurin concurs, envisioning a Delta with Freedom Fellows as leaders. "The Freedom Project is taking all the good that came out of the civil rights movement -- the need to educate young people, to make them aware of their history, the struggle that their parents and others went through to secure what they have -- and it's bringing these young people together, teaching them about that history," he says. "And now they can build on that by getting a good education and doing things to improve the quality of life in their communities. So the Freedom Project is kind of like the movement's baby developing and growing up."

Go to "How to Build Instruction Around Your Region's History."