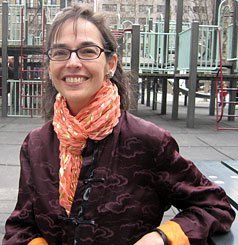 A little more than a year ago, Lenore Skenazy took her nine-year-old son, Izzy, to a Manhattan Bloomingdale's, deposited him in First-Floor Handbags, and left. Izzy had been begging his mother to let him take the subway home by himself, and Skenazy finally decided he was ready. It turns out he was.

"My son got home, and he was ecstatic with independence," Skenazy wrote soon after in her New York Sun column -- one that set off an international firestorm over how much freedom children should be afforded. Some hailed Skenazy for standing up to a culture of paranoia that stifles kids' independence. Others accused her of no less than child abuse.

Skenazy fired back with Free-Range Kids, a movement of parents seeking to unshackle their offspring; a popular blog, and -- as of this week -- a sharp, well-researched, and witty book arguing that our fearful restrictions on kids’ freedom harms them more than protects them. Statistically, our children are far safer than breathless television news reports on abductions and assorted domestic hazards would have us believe.

Skenazy recently spoke with Edutopia.org about the hysteria over kids' well-being and the corollary obsession with whether they're thriving in general -- a subject with implications for educators as well as parents.

Edutopia.org: How did the Free-Range Kids movement come about?

Lenore Skenazy: After I got all this attention for letting my son take the subway by himself, I started looking into how something I considered safe and simple could be considered worldwide news. And I started to see that there are a lot more restrictions on kids than I'd realized.

In Chappaqua, New York, for example, school buses won't drop a child off after school at their own bus stop unless there's a preordained adult waiting for them. If there isn't, they take the kid right back to school, so you have to drive over there to get him. And considering that statistics show a child is 40 times more likely to be killed in a car accident than be snatched from the bus stop, it started to seem that we're raising our kids in a society with a lot of hysteria.

The movement is not to negate the necessity of car seats or helmets or even a sensible walking plan to school. But it is to say that the world hasn't become less safe than when we were growing up.

Parallel to our fear for their physical safety is this idea that our kids need more enrichment; from the start, we're playing Mozart to them in the womb. My younger son is in fifth grade, and whenever he hasn't done every bit of his homework, he's given Recess Academy -- translation: no recess. This means his entire day is spent inside, as if being deprived of your parsimonious 15 minutes of running around with friends will make you a better student.

So I think this paranoia about kids thriving seeps into the educational system at times. In the 1980s, there was this idea that our kids were falling behind, and since then, schools have been whittling away at things considered less than academic -- without realizing until recently that those things are complementary.

Do you hear from teachers?

I hear from a lot of teachers. Often, they're complaining about parents and say things like, "God, they won't let us do anything" or "Can't they let the kids walk into the classroom on their own?"

A sixth-grade teacher in New York got in touch because of a project she had her kids do: She read them my essay about Izzy taking the subway and then asked them to do something they hadn't done before, something their parents couldn't help with.

A bunch of kids made fried eggs for the first time. My favorite was a girl who walked to the grocery, bought ingredients with her allowance, and came home and baked a cake. She said, "All the way there, it looked like people were glaring at me. But the weird thing is, as I was walking home, people didn't look mad anymore. It was fun!"

Other kids had similar experiences -- it was scary at first, but by the return trip, they'd already acclimated. It was a revelation for them.