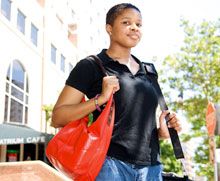 Danielle Adamson stares at the card in front of her. She has the chance to buy a four-unit building for $60,000. It's not that she can't afford it -- she has $4 million in the bank -- but she's weighing the long-term return on the building against that of her savings. Realizing the building would give her a 24 percent return and the savings a 1 percent return, she buys it.

At this moment, the Montgomery Blair High School senior is playing a money-management game in class, part of teacher Kevin Murley's hands-on approach to teaching students about personal finance. With complete seriousness, Adamson and her fellow players sit at a small computer table, mull over their options, and scribble on cash flow statements. The game ends when each player makes enough money from investments to quit his or her job.

When she finishes the game, with a "Ha! Oh, my gosh!" Adamson slides over to a clasroom computer to work on her business plan for a desktop publishing company, Print Publications. Her goal: "To be the publishing department for small businesses." She already has one paying client. (View her Microsoft PowerPoint presentation.)

In Murley's entrepreneurship class in this Silver Spring, Maryland, school, it's all about learning to make money. Activities like this game and field trips to New York City's wholesale district prepare students for the real work: creation of business plans that require market research, serious number crunching, and potentially viable products. Though some students end up making thousands of dollars bringing their plans to fruition, most don't go beyond the plan -- and that's OK with Murley.

"I most certainly want them to be able to recognize an opportunity," Murley says. "I want them to be able to actually manage cash, start a business, have some money coming into their pockets." It's his hope that his students at least leave his class with the basic financial knowledge that he sees as missing from public education. "It's preposterous that kids don't graduate with the ability to budget," Murley says. "We've forgotten they need to have some financial skill."

It's the Economy, Again

As the American economy falters, it's even more important for students to leave high school -- and the family fold -- with financial acumen, says Stephen Epstein, founder of DollarCamp, a program that teaches finance to high school students. Finance "absolutely should be part of the curriculum: how to budget, how to control their spending, how to build good credit, how to pick a good credit card, and how to stay out of debt," Epstein says. Once kids are on their own, he adds, they can quickly get into debt without realizing how difficult it is to get out.

Miami's John A. Ferguson Senior High School recently began teaching its business-academy students financial planning and how to create budgets. "Especially with the way the economy is headed these days, students need financial literacy," says Ferguson business teacher Diahann Holder. "I think that when they get a chance to see how to prepare a budget, how to prepare for the future, they learn more."

Julie Kantor, vice president of public policy of the National Foundation for Teaching Entrepreneurship (NFTE), says that kids, after watching family members struggle financially, also want to be their own bosses. "There's a distrust of corporate America -- they've seen family members get laid off," Kantor says. "We have to prepare our young people to make it in a market economy."

States are catching on to the need for more economics classes, but progress has been slow. According to a 2007 survey by the National Council on Economic Education (NCEE), all states include economics in their standards, and forty states include personal finance. But only seventeen make economics a graduation requirement, and just seven require students to take a personal-finance course. Furthermore, the NCEE survey found that just a handful of states require study about entrepreneurship as a component of a course needed to graduate. (Download a PDF of the survey.)

To teachers of entrepreneurship classes, the hands-on approach to business education is the key to making all that financial information stick. It taps into students' creativity and shows them how the business world works by making them move around in it. The results: innovative ideas like a cupcake on a stick and earphones that fit into hoodies, plans to help a restaurant become more eco-friendly, and actual working businesses like Danielle Adamson's.

Entrepreneurship "is really the driving force for this country's economy," says Greg Fisher, who teaches government and economics at the California Academy of Math and Science, a magnet high school in Carson, California. "Knowing how a business runs kind of forces them to look at all aspects of the economy."

Fisher's students create a business plan and a product prototype as part of the interdisciplinary program all seniors must take. In the spring, the students participate in a business fair, setting up booths to promote and pitch their products to judges. "Invariably, there are always a few that have legs," Fisher says. Two of the business concepts his students have come up with: a biorhythmic watch, and climate control for baby seats. (Find Fisher's curriculum here.)

Murley runs his entrepreneurship classes, electives within the school's business academy, with help from the NFTE, using the group's curriculum and taking part in a business-plan competition the foundation sponsors.

As part of the NFTE program, his students take a trip to New York City's wholesale district each fall. There, they're handed $50 to buy merchandise they think they can resell for a profit. The point is to give them a taste of what it means to turn a profit and set the stage for creating their own businesses. "Most of these kids have no money-management background or skill," Murley says. "You don't connect to it unless you have real experience. They have to actually be exposed to how people make money."

When they get to the city, suddenly, it clicks: They can buy up a bunch of costume jewelry or iPod speakers, sell them to their friends, and double their investment. Murley says sales deals often start on the bus ride back to Maryland.

After their trip, the students get to work on their business plans. Not only must they come up with a workable idea, like Montgomery Blair student Danielle Adamson's desktop publishing business, they have to create a cash flow record, identifying how much to charge for their product or service, how much money they need to start up, where they will get the investment, and how much to allot for labor time and fixed costs such as flyers or Web sites.

Adamson made $300 creating a one-hundred-slide Microsoft PowerPoint presentation for, ironically, a group that helps young people start businesses. Among the lessons learned from her first paying client: She should charge more than $10 an hour.

"Anyone can be an entrepreneur," says Adamson, who plans to attend Agnes Scott College, in Decatur, Georgia, this fall. "I thought maybe you have to have this particular sort of skill, but you don't. You find something that you love, and you can make it into a business." 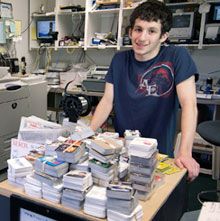 Adamson says her idea came from a longtime love of creating things on the computer; she made newsletters for a nonprofit group before she even started high school. Aaron Sacks, another former student of Murley's, found his inspiration when helping his dad create party favors for his brother's bar mitzvah. His plan for personalized playing cards turned into a business that has made a $30,000 profit.

Sacks took Murley's class in the 2005-06 school year, when he was a sophomore, and won $3,000 in the 2006 NFTE regional competition, giving him seed money to get the business, You're On Deck, started.

"It's just a fantastic experience," Sacks says of creating a business plan. "Even if it doesn't work out, even if you lose in the competition, you still gain from the experience of going through the process." The entrepreneurship class, he adds, taught him ways to make money through investments, how to talk to customers and organize his time, and even technical points like how to use PayPal to collect money.

In the end, what matters most to teachers like Fisher and Murley is what their students take away from the classes: financial knowledge, career options, and business skills. Murley considers it a win when one of his students gets told she has more business poise than a business school graduate. The week before, he says, he and the student spent ten minutes just practicing a handshake. Another student started selling cards from the Japanese trading-card game Yu-Gi-Oh! on eBay to make extra cash.

For Sacks, the entrepreneurship class inspired a career path: He plans to study business at Boston's Bentley College this fall and will use some of his business profits toward tuition. He also wants to extend his market to include the Boston area. "I need to just keep marketing; there's no reason why it should stop," Sacks says.

Go to "How to Teach the Soft Side of Business."