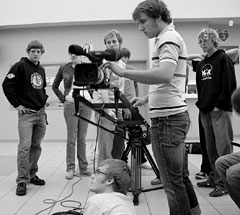 A massive train, its brakes screaming, hurtles into a car. A cacophony of sirens, helicopters, crackling walkie-talkies, and the whine of an electric saw that sheriff's deputies use to remove the car's hood blend in an awful and frightening mix. Paramedics work intently on a boy pulled from the wreckage, but to no avail. His body is moved, lifeless, to a stretcher.

The action is riveting, and convincing. In seven minutes, It's Not an Accident, a film the Illinois Department of Transportation uses to teach new drivers about the grim realities of train crashes, tells a compelling story full of palpable grief. But the movie -- polished, edgy, realistic -- comes from an unlikely source: a class of high school students.

Juniors and seniors from the southeastern Illinois communities of Effingham and Teutopolis were able to do the job thanks to a high school course called Multimedia and Film Design. The class, taught by Joe Fatheree and Craig Lindvahl, is designed to help kids learn storytelling techniques through the use of contemporary technology, including film and video production, a goal the traffic-safety project clearly achieves.

Equally important is another objective: to immerse students in real-world work experiences, provide them with ways to give back to their communities, and teach skills that reach across the curriculum. Considering the work behind the film -- weeks of coordination with state law enforcement officials, emergency workers, and railroad executives, plus location scouting, writing, test shots, storyboards, and complex filming with actors, vehicles, and a train crash, this effort was a resounding success. "It may have been a controlled crash," says Fatheree, "but you still had to get it right the first time; there was no room for refilming."

Fatheree and Lindvahl are very proud of the high-quality film their students produced, but they're more impressed with how the kids worked as a team while employing a wide range of skills. Students acknowledge the teamwork and credit the course with providing them with such diverse skills as organization, budgeting, grammar, and critical thinking.

Amanda King, a recent Effingham High School graduate who plans to major in journalism in college, says that as a result of rewriting drafts of scripts based on her teachers' and classmates' critiques, the course has improved her writing skills more than her rhetoric class has. "I have also learned to work with groups to complete projects, something I was previously disinclined to do," she says. "Right now, for instance, I am working, and getting along with, three others on a dissection project in anatomy. And I now know to schedule time for setbacks -- lots of them!"

The first semester of the yearlong class is divided between learning the basics of videography (lighting and framing scenes, for instance) and storytelling (such as plot and character development). During the second semester, students choose from a menu of practical assignments. There are six films to critique, including the documentary Spellbound and the Alfred Hitchcock classic Rear Window. They're also asked to produce a visual interpretation, such as an animation, of well-known poems like Langston Hughes's "A Dream Deferred" and to defend their creative decisions ("Why did you use blue here?"). Students must complete at least one public-service project, such as the train-crash documentary.

The capstone, though, is the film. Each student is required to create one from storyboard to finished product. These films, which have ranged from a parody in 3-D animation of The Lord of the Rings to a documentary, with archival footage, about a 1949 fire at a local hospital that killed eighty people, highlight the students' full capacities as storytellers.

"I give them just enough of the technology to be able to navigate," says Lindvahl. "What they learn because they want to is so much more effective than what I can teach them. Nothing pleases me more than to hear a kid say, 'You know, unless you do this, you can't do that.' That's when they really learn something."

The Multimedia and Film Design class is now a popular offering, but its beginnings are humble. In 2000, Fatheree, who teaches at Effingham, and three of his students collaborated on an animated storybook for children in Zimbabwe. The project, which they produced with an outdated version of Flash on an old computer, so impressed school board members that they gave him funding for more computers and improved software. The next year, he taught animation and Web design to twenty students and received a $50,000 grant from the state Board of Education to create a Web site, complete with streaming video.

About the same time, Fatheree met Lindvahl at a dinner event. The music teacher and bandleader from the smaller, more rural community of Teutopolis had already garnered several regional Emmys as well as the attention of PBS and the Smithsonian for documentary films he'd taught himself how to make. At the request of some of his students, he'd also started teaching his craft. Fatheree told him bluntly, "I want to learn what you're doing." Within weeks, the two began work on a documentary about Vietnam veterans.

It didn't take long for the two teachers to seriously consider combining their classes and expertise, though they knew the challenges would be great. Effingham and Teutopolis, located 4 miles apart in separate school districts, have different school calendars, daily schedules, and in-service days and sometimes even conflicting snow days. The teachers, however, say they're blessed with school administrators who value what they're doing.

For the students, the payoffs have been many. The classroom hums with the serious planning and joyful inspiration of creative camaraderie. The "Eureka!" factor many students experience in the class has only been heightened as a result of working with people who had been virtual strangers prior to the beginning of class.

"The school I come from is much smaller and therefore less diverse," comments Teutopolis senior Mike Niemerg, who drove to Effingham every day during his junior year to take the class. "When I started working with students from Effingham, I was exposed to different kinds of people. It's also like being in a real work environment, since the only thing that links us is our passion for our work, rather than our school spirit."

The most obvious benefit of marrying the two programs has been the combination of tools and the ability to amalgamate grant funding based on the larger population of students now being served. "One of the biggest challenges to teaching filmmaking or Web design is the price of the equipment," says Fatheree. Although technology has become more accessible -- and affordable -- in recent years, accruing enough hardware and software to have a broadcast-worthy studio, as Effingham now does, is out of reach for most schools' budgets.

Fatheree, an ardent grant writer, has netted nearly a half-million dollars for the program. Since that first animated comic book, he has successfully requested more funds from the local school board and a nearby educational foundation and also has received significant awards from the Eastern Illinois Employment Service Agency, a group focused on vocational education, for hardware and training. In addition, the National Corporation of Service Learning awarded the program several grants. Now, it's not uncommon for a student to leave the classroom with a quarter-million dollars' worth of equipment in tow. 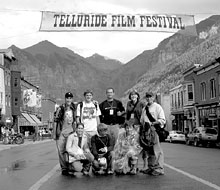 After seeing how much students learn when they instruct each other, Fatheree and Lindvahl are exploring new avenues for peer teaching. Next year, they'll continue the No Barriers Project, which launched last spring and joins students from Effingham and Teutopolis with kids from two inner-city schools in Chicago and East St. Louis.

"The first time we brought our small-town, somewhat sheltered kids together with the urban students -- most of whom live in the shadows of Chicago's skyscrapers but have never once been to the heart of the Loop or a major museum -- one of them pondered, 'What are the real differences between life in Effingham and life in Chicago?'" Fatheree recalls. In response to that question, students from both communities will make day-in-the-life films, with the Effingham/Teutopolis kids teaching their urban peers the art of videography and storytelling.

Fittingly, the Multimedia and Film Design course ends on the red carpet: The class hosts a community-wide showing of its work at a restored movie theater in downtown Effingham. The sold-out audience is always taken aback by the quality of the films. Rather than viewing inconsistent, grainy pieces, they watch professional, engaging work that could appear on television, and it leaves them stunned. "I didn't expect it to be so good" is a typical overheard remark.

The effect on the kids is even more powerful and long lasting. They routinely tell Fatheree and Lindvahl that showing their films publicly was one of the most nerve-wracking things they ever did. And yet, as any filmmaker -- or any other artist -- will attest, there's no warmer feeling than being around when an audience connects with what you're trying to tell them. It can be a life-changing moment. Whether the students ever become professional filmmakers, it's their teachers' hope that they'll be able to look back to the class and think, "That's when I knew I was a storyteller."

Jennifer New is a writer and educator in Iowa City, Iowa. Her latest book is Drawing from Life: The Journal as Art.

Go to "How to Use Digital Storytelling in Your Classroom."