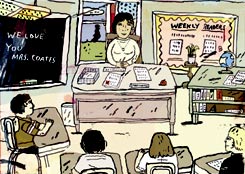 Why should school be just a series of shipboard romances? It is a crass question -- but one that is entirely appropriate, and posed recently, believe it or not, by an educator. He was addressing the conundrum of school planning, a process that aims to create ideal learning environments but so often fails to satisfy a key component of emotional intelligence: bonding.

Psychologists and educators agree that learning is enhanced by long-term connections between teachers and pupils, yet students rarely have the same instructor for more than one school year.

"Humans need meaningful relationships, particularly when they are in major developmental periods," says John H. Lounsbury, dean emeritus of the School of Education at Georgia College & State University and consulting editor of the National Middle Schools Association. "So many of the important objectives of education cannot be effectively achieved in a short-term relationship."

One solution to the fleeting connection between kids and teachers has been around for decades. It's called looping. Endorsed by the U.S. Department of Education as early as 1913 under the label "teacher rotation," it is a form of classroom organization in which a teacher spends two or three years with the same group of students.

Also known as student-teacher progression, two-cycle teaching, and multiyear instruction, it most likely originated with Rudolf Steiner in the early 1900s. Steiner based his Waldorf schools on "whole-child" education, and teachers at his schools kept the same students through grades 1-8.

"Looping is a structure, not a program," explains Char Forsten, author of several books on differentiated instruction and a former teacher who did two- and three-year loops. "You can't make a student learn; you have to get to know how they learn, how they retain information, what motivates them. I knew I could do things the second year that I could never have done if I had been starting out with a brand-new group."

Forsten, as well as many other teachers who have tried looping, believes the practice allows educators to develop rich relationships with students and their families, create trusting and caring classroom environments, and help kids overcome both academic and developmental obstacles.

"When you make a two-year investment, you're not just getting them ready for a test and sending them off," says Sue Kowalski, who looped at the Frazer School, in Syracuse, New York. "You're building a community that everyone learns to be a part of. It's a powerful force."

In fact, say psychologists, it is nothing less than a primal need in action. People are hardwired for long-term relationships, and emotional growth isn't optimally possible without a permanent, supportive presence. Walter S. Gilliam, assistant professor of child psychiatry and psychology director of Yale University's Edward Zigler Center for Child Development and Social Policy, explains that humans are born preferring to look at people, and by the time we're about five or six months old, we show a strong preference for being with the same adults.

"Learning in school is as much a social activity as it is a cognitive one," says Gilliam. "Children, especially young ones, complete school activities to please the teachers they know and care about. The sooner we begin to understand this and use it in designing curricula, the better."

But looping doesn't simply satisfy a basic human need, say its proponents; it also provides distinct educational advantages. The approach gives teachers a chance to understand the individual learning styles of their students, which means it can be especially beneficial for kids who have challenges in the classroom.

Some of the best learning occurs when a teacher can individualize instruction for each child, but this is a luxury for many teachers on a regular schedule. Typically, by the time a teacher understands how each child learns best, the school year is over. With an extended relationship, a teacher has time to develop ways to reach every student in the classroom, regardless of each one's special needs. And, because looping teachers have time to build a close-knit, protective atmosphere, children may be more likely to help each other.

As familiarity enhances learning, it provides a boost to students' social skills. By their second year, Kowalski's students called each other out for interrupting. Several teachers boast that even the shyest students begin participating in class discussions because of their ever-growing comfort level.

Erin Burleigh, who taught third and fourth grade at Picnic Point Elementary School, in Edmonds, Washington, says students came to her for guidance in dealing with other teachers as well as their peers. "The kids know they can trust you, because you're not going anywhere," she says.

That sense of connection is particularly helpful during times of transition. Both the beginning of the year and the end can be extremely stressful, especially for younger students. In the fall, they test their new teacher's limits; in the spring, they suffer from separation anxiety. Amy Wright, who looped with first graders and second graders several times at Fall City Elementary School, in Fall City, Washington, noticed a significant decrease in behavioral problems.

"Typically, some kids start acting out at the end of the year, because they know you're leaving them and it brings up abandonment issues," she says. "The years I looped, I didn't have any of that."

Walter S. Gilliam understands that adults might not think that the beginning of a school year is a big deal, but he cautions us to consider it from a child's perspective. For them, it's a whole new set of peers and a new relationship with an adult. Looping lets kids focus on learning.

It can have a similar effect on parents. Nearly every teacher who has looped talks about how the practice improves relationships with families. They believe they communicate more effectively with parents and compare the second-year parent-teacher conference with the experience of visiting an old friend. And, when students know that their parents and teacher are in sync, they tend to work harder and perform better.

Considering there is such widespread affirmation for the practice among those who've tried it, it might seem odd that looping isn't more popular. Jim Grant, author of several books on looping, says no figures exist for how many U.S. schools loop, but he estimates the number to be as low as 1,000. Clearly, not everyone is singing its praises.

One reason is that it can be hard, especially with No Child Left Behind Act requirements and high-stakes testing, to find teachers willing to take on the extra work of learning a second or third year of curriculum. In addition, many traditional administrators don't want to break away from the accepted model of schooling. Some people fear they'll have classes with bad chemistry, but looping proponents say the problem is easily solved, usually by moving a couple children into other classrooms.

Barbara A. Schaefer, professor in charge of the graduate programs in school psychology and an associate professor of education at Pennsylvania State University, believes looping has positive attributes but says there's a difference between feeling that something is valid and demonstrating its value. In the small amount of quantitative research about looping she conducted, Schaefer found that the practice causes no difference in academic achievement or attendance rates.

Still, those who've tried looping swear by it. Says teacher Erin Burleigh, "The relationship I've developed with the kids I looped goes beyond teacher and student. We're like a family: We know each other, how we operate, and all about our strengths and weaknesses." Adds Sue Kowalski, "I recently ran into some kids from my first looping group in 1996. I can tell you their names, where they sat, what made them tick, what would put them over the edge. I truly knew these kids."

Ellen Ullman writes about education and technology for a variety of magazines.