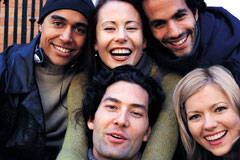 So it makes perfect sense for recruiters to use every available resource, including popular social-networking sites such as Facebook, to get potential candidates' attention. That's just what recruiters did this year at TeachNOLA, a two-year-old nonprofit organization in the Big Easy that hires and trains teachers to work in New Orleans's toughest schools. After all, Fortune 500 companies and IT firms use cyberspace to recruit and evaluate candidates. Why shouldn't educators join the ranks?

The idea is simple: TeachNOLA recruiters created a Facebook group -- a digital network with a page on the social-networking site that gives basic information about the organization and a link to TeachNOLA's home page. The recruiters then invited their friends and colleagues to join the group. When a member joins, a link to the group's Facebook page appears on that member's profile page. That person's Facebook friends can see the link, which helps spread the word about TeachNOLA's search for teachers. The organization also incorporates its Facebook group info into the recruitment emails and referral requests it sends out.

"We do a lot of traditional recruitment -- ads in newspapers, online recruiting, calling community groups, visiting college campuses," says Walter Stern, one of two site managers who oversee recruitment. "Facebook fits really nicely with our larger approach to the process, which is having a clear and compelling message about the opportunity to make a difference where you're needed, and then getting that message to as wide an audience as possible."

Sterns adds that the vast majority of TeachNOLA applicants this year identified either the Internet (66 percent) or word-of-mouth referral (22 percent) as their first source of information about the organization. Facebook is perhaps the perfect combination of these top two recruitment tools.

Of course, using the Internet to recruit teachers isn't a new concept. As early in the Internet age as 1997, the office of California State University's chancellor launched CalTeach, a predecessor of Teach California, a Web site dedicated to helping prospective teachers understand requirements and find openings in the state. (The California Department of Education now runs the site.) And today, nearly every district in the country uses the Internet to recruit, typically by relying on a combination of postings on the districts' own sites and on recruitment sites, such as CareerBuilder.com.

But very few districts, if any, use social-networking sites, perhaps for good reason. Part of a medium dedicated to quick clicks and short attention spans, Facebook works for organizations such as TeachNOLA because these groups have an appealing service component.

In the case of New Orleans, recent history grabs young idealists' attention. It would be much more difficult to garner this kind of social cachet for even an urban district, much less a suburban one. But if organizations such as TeachNOLA see direct results from its Facebook efforts, then other districts might take note and find a way to build online networks of supporters who can reach out to friends, former colleagues, and family members in an attempt to attract talented teachers.

It's too early to tell whether Facebook has worked for TeachNOLA. This year -- the first using the networking site -- more than 1,490 applicants seeking certification and 810 certified teachers applied, but only one applicant identified Facebook as his or her first source of information. "It could be something we see more of next year," Stern says, adding that he and his colleagues are pleased with the fact that as of early May, 255 people had joined the group.

A quick look at the member page reveals just what you might expect. The majority of members are recent grads and college students, many of them from top-notch schools. Stern agrees that Facebook is probably a more useful tool for recruiting aspiring teachers in their twenties than it is for finding career changers or certified teachers looking for a new challenge. But TeachNOLA appeals to young professionals as well. Last year, 59 percent of the certified cohort and 78 percent of those seeking certification were under thirty.

"I was a little bit skeptical at first," Stern admits. "I had never been on Facebook. It wasn't around when I was in college, but it didn't take me long to see where the benefit was. Very soon, I started getting emails from people who saw us on the site."

Connecting for a Cause

TeachNOLA isn't the only service-oriented education group to use Facebook. Teach for America has several groups on the site -- both for alumni and for candidates -- but some of them are private, for use only by members the group's moderator has approved. TeachNOLA partner the New Teacher Project, a national nonprofit organization that recruits and places high-quality teachers in high-need schools, uses Facebook to recruit candidates for all of its twenty-one placement programs.

Rachel Szarzynski, director of recruitment for the New Teacher Project, admits she and her colleagues thought long and hard about whether to try a social-networking site. They eschewed MySpace because of what they described as the "sketchiness factor," but they decided that Facebook had a layer of legitimacy, buoyed by good press. Also, the fact that it began as a tool for college students means its user demographic skews a bit older than that of sites such as MySpace.

"We love referrals," Szarzynski says, "and Facebook helps us generate them." In general, she and her colleagues have to review about fifteen applications to find one person they want to hire, but for people who have been referred to the program, the ratio is closer to seven applications for every one hire.

For Jeffrey Warner, the appeal of TeachNOLA was simple: He was drawn to New Orleans by the challenge and the opportunity to improve a place that had a crumbling school district long before Hurricane Katrina hit. And he gets to teach full time while getting certified, instead of waiting another couple of years to finish a graduate degree or a certification track.

"The job is incredibly difficult," says Warner, who teaches civics and an economics course about free enterprise. "I can't imagine having a harder job right out of college." As for his thoughts on using Facebook to recruit, he is of two minds: "On one hand, I think it's brilliant to target my generation -- that youthful idealism wanting to make a difference." He points to the fact that Facebook sponsored the presidential debates in New Hampshire late last year. "It's not so much of a social thing anymore," he says. "It's a networking thing."

But he does worry about whether someone his age or younger can grasp the gravity of the situation in New Orleans. "People really have to understand how tough things are here before they commit, and I wonder if Facebook communicates that," he adds.

Therein lies the rub for Kaycee Eckhardt, a TeachNOLA recruit who teaches ninth-grade reading intervention to students reading up to six years below grade level. An alumna of Louisiana State University (with a degree in poetry), Eckhardt taught in Japan for four years before returning to the United States. A friend of hers stumbled on the TeachNOLA site, and it felt like a good fit for Eckhardt -- an opportunity, she says, to return to Louisiana and to do "real grassroots good." But Eckhardt also thinks Facebook is a bit misleading. "It doesn't set the appropriate tone for what we're actually doing down here," she explains. "It's not social networking here."

She's passionate, however, about the job and about her students, who have seen plenty of teachers leave. "New Orleans needs teachers now who are going to work hard to help these kids," she notes, "but they have to be the right people."

There's no doubt TeachNOLA's Walter Stern agrees. For now, he's willing to give Facebook a chance to work its cyber magic and perhaps attract candidates who wouldn't have thought about teaching in New Orleans if they hadn't read a friend's profile and seen the TeachNOLA link. "We're seeing high levels of interest in the program," he says. "There are a lot of people out there who are really looking for meaningful work. The hard part is connecting them with this opportunity, and Facebook is a way to do it, in a virtual sense and on a large scale."

Hilary Masell Oswald lives in Denver and writes about such diverse topics as urban education, health care policy, and trends in art and architecture.