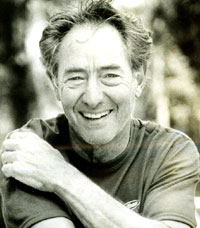 Television has no shortage of critics. The tube, we're told, imprisons us in an unreal, virtual life. It presents the "news" in sound bites that give equal time to children starving in Darfur and the latest celebrity divorce. It seduces us into a fantasy land of soap opera heroes, vamps and villains, cop shows, sitcoms with canned laughter, cartoons about sadistic woodpeckers and galactic shootouts. Commercials promise us happiness and freedom from pain or loneliness if we take the right pills, eat the right cereal, drive the right car, or drink the right beer.

We are entertaining ourselves to death, say the scolds, participating vicariously in the lifestyles of the rich, the famous, the venal, and the violent. With scarcely a protest, we are becoming passive consumers of prepackaged meanings and simplistic solutions -- a manipulated mass.

The critics are right enough, but they are missing the real issue. Our danger lies less in the virtual worlds that engulf us than in the failure to think clearly about what we are shown. I suggest we consult Plato, who practiced the critique of images in Athens twenty-four centuries before Philo Farnsworth invented television.

In the well-known parable of the cave, Plato compares the human condition to the situation of men who have spent their lives in a cave chained in such a way that they can see only the wall in front of them. A fire burns behind them, casting light on the wall. Between the fire and the captives, performers carry objects such as figures of men or horses that cast shadows on the wall. Because the prisoners have never seen anything except these shadows of imitations of things, their opinions about "reality" are illusions, though they cannot know this.

Imagine what would happen, Plato says, if one of the men should manage to turn around. At first, the light from the fire would be blinding, but then he would know that the objects aren't real, and that his previous ideas, based only on shadows, were all illusory.

Suppose, further, that this man emerged from the cave into the sun and saw living men and actual horses. He would now know that the objects he previously supposed to be real were only copies. Finally, Plato suggests, suppose this man, now partially enlightened, were then to see in his mind's eye a vision of the essential natures of man and horse. With what clarity, would he finally understand the difference between images of things and the things themselves?

Plato's parable shows how difficult it has always been to separate shadow from substance, propaganda from reasoned conviction, raw data from meaning, opinion from wisdom. Every culture has had its mythmakers, propagandists, and news givers. The first storytellers fascinated their audiences with tales that convinced them that floods are a sign of the gods' wrath and rainbows a symbol of divine favor.

In medieval Europe, the perils of sin and the rewards for goodness were advertised in the stained glass windows of cathedrals. Songs and sermons promoted crusades and holy wars long before the printing press came along to make yellow journalism possible or television helped politicians convert a struggle between haves and have-nots into a battle between heroes and evil empires. The manipulation of public opinion is as old as civilization and as inevitable as the lust for power.

The mark of a free mind and a free society is the ability to be critical of institutions and resist the seductions of propaganda and advertisement. We need to teach our students that every citizen has a moral and civic obligation to deliberate, weigh evidence, and make informed judgments. So it is an essential task of educators to promote the skills of visual literacy that help us understand how we can be manipulated by images and seduced by media-generated virtual worlds. Newspapers and television could do a better job of presenting us with information and a variety of opinions, but they can never do our thinking for us.

A wise old man once told me, "Never go to sleep immediately after going to bed. Simmer. Lie quietly and review the events and experiences of the day and sort out what has been important and what has been trivial." That may be the best advice I ever got. Our society, already flooded with information, might act with greater wisdom if we developed the habit of simmering. Plato knew better than our modern critics that without silence and time for deliberation, we are condemned to be imprisoned in a virtual reality not of our making.

Sam Keen is the author of several books, including To a Dancing God and Faces of the Enemy.