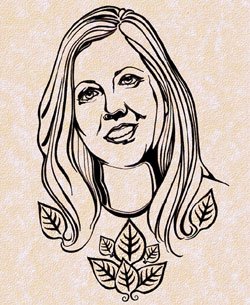 Driving past Mount Bethel Elementary School, along Johnson Ferry Road in Marietta, Georgia, you may notice the sign that reads "Cobb County Green School." This designation coincides -- not coincidentally -- with the recognition of second-grade teacher Melissa "Missy" Bain as Cobb County's Green School Teacher of the Year, 2007.

Bringing an environmental awareness to her class and to the school as a whole, Bain has used what her principal, Robin Lattizori, calls her "energy-plus enthusiasm" to help the school achieve its environmental Silver Status (meaning more than ten teachers completed five environmentally friendly lesson plans). The award, and the decal displayed outside Bain's classroom, comes in recognition of her project to convince many of her fellow teachers to prepare the five environmental lessons for their classes and post them online.

"What's unique about Missy is how passionate her commitment to the environment is," says Cathy Nguyen, water-conservation coordinator for the Cobb County Water System, one of the agencies recognizing Bain and Mount Bethel. Nguyen, who came to speak to students in the spring, was amazed that "when Missy starts to talk about the environment, the kids really latch on."

Bain began reinforcing some of those lessons on the very first day of school this year when she noticed plastic water bottles accumulating in the classroom wastebasket. Encouraging her students to reclaim the bottles and place them in a recycling box, she reminded them that it requires the energy equivalent of 150 gallons of water to produce a single 16-ounce water bottle. The problem was that even though recycling is the practice at Mount Bethel, and plastic bottles can be used to make other products, such as fleece fabrics, local recyclers refused to pick them up. Bain's solution was to go to the school PTA's environmental committee and convince it to pick up the tab for the plastic recycling.

Spurred on by students, parents get involved in Mount Bethel's green movement. "After we teach a lesson," Bainsays, "the kids can immediately go homeand do things like turning off the faucet while they brush their teeth and turning off lights when they leave a room."

According to Bain, her green lessons will be reinforced this year by the addition of a fourth-grade environmental reporter to Mount Bethel's closed-circuit-television morning news show. Even before the start of this school year, Bain received an encouraging signal that her message was getting across, in the form of an email from one of her new students. "Dear Mrs.Bain," the note began. "We have something in common: We are both passionate about recycling, and we're going to have a great year practicing it every day in school."