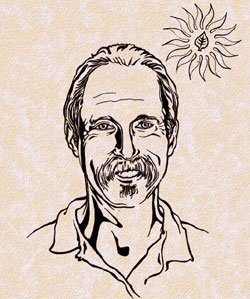 Award-winning veteran science teacher Gary Swick, of Dundee-Crown High School, in Carpentersville, Illinois, 40 miles northwest of Chicago, considers his role as much magician as teacher in his eight environmentally focused courses. "They often don't want to learn, so you have to trick them into it," Swick says of some of his initially unenthusiastic students.

For much of his time at Dundee-Crown, Swick has inspired his students "by dragging them outside and opening their senses." Nature field trips to such places as the nearby Fox River can be a wise social investment as well. Swick mentions a poll conducted for the Illinois State Education Board's Environmental Meisters and Mentors Program in which roughly 80 percent of environmental scientists attribute their career choices to just these kinds of high school outings.

Swick's own career choice was influenced by a bit of wisdom from his father, a chemist unhappily employed as a corporate foreman in Chicago: "Pick a career you love so you don't have to go to work," his father advised. Swick, who majored in natural resources management at the University of Wisconsin, was able to make his love of the outdoors a part of his teaching career at a time when environmental issues were of little general concern. "I got to do what I wanted because nobody cared," he says. Swick's public profile has grown significantly since then, along with the popularity of his courses.

Early in his career, Swick supervised the founding of an organization called Friends of the Fox River, dedicated to studying and protecting that 185-mile-long watercourse, which flows through Wisconsin and Illinois. In1999, the organization won a Christa McAuliffe Fellowship to fund the Fox River Monitoring Network. Swick used the money to monitor different aspects of the river, including water quality, invasive plants, and animal and insect life.

"I saw it as a powerful educational tool and a real motivator," Swick says about a program that involves "real science, in the real world, with real implications." He compiles the data gathered by each year's classes and uses it as a core-teaching tool. Swick explains, "We can look at the last four years of data, and if things get worse, we can answer why and ask what we can do about it."

These days, Swick is definitely not following another bit offatherly advice: "Don't commute." In July, along with colleague Elizabeth Woods, Swick won a $10,000 A+ for Energy grant from British Petroleum. The money will outfit a school bus to take the educational message of sustainability on the road. Planning to get his "mobile energy fair" rolling by January 2008, Swick has used the project to encourage the kind of curriculum that, he feels, "does more than teach skills and content to put in the bank."

This real-world, cross-disciplinary learning is apparent in Dundee-Crown's auto shop, which is performing bus maintenance, while the chemistry department is transforming used oil from the cafeteria into biofuel to run Swick's bus. Meanwhile, journalism and theater classes are producing displays for the bus tour, as student-artists work to transform the bus into a rolling environmental billboard -- by painting over the s and the h in school, the bus's label now reads "cool bus."

Swick is deeply concerned about the increasing disconnect between today's students and nature. "They don't know how beautiful and sensitive the ecosystem is, or even why they should care about it," he says. Swick's Friends of the Fox River, the "cool bus," and school recycling programs are all part of an effort to encourage students to become what Swick calls the environmental "best in thegalaxy."