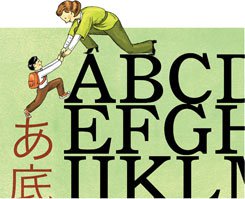 In light of my 30-year career as an educator and eight years in the U.S. Congress, it surprises people to learn that I struggled as a student. I was shy to speak up. I failed classes. Sometimes, I got into trouble.

Perhaps that's why I pursued a career in education. My empathy with English-language learners (ELLs) -- and the unique obstacles they face -- inspired me to get involved. And I've learned that we as educators must do more to encourage students who are nonnative speakers and that a little extra care for them can go a long way.

Between the ages of one and almost five, I lived at Camp Amache, a Japanese-American internment camp in southeast Colorado during World War II. One of the first lessons I learned there was that Japanese carried a negative connotation in America. After the war, we found affordable housing in Chicago, and I enrolled in Ray Elementary School, on the South Side.

My first few years of school were lost in translation. I did not read English. Today, I would have been considered an ELL student because the predominant language spoken at home was Japanese. I could get by in playground English, but in class I just pretended to understand. I became increasingly ashamed of the limitations of my first language. Eventually, I dropped Japanese and adopted English, losing my native language and a critical part of my culture.

I switched to English because I had to. No adult took the time to explain things or help me understand. I never asked for help, although I desperately needed it. The teachers at Ray missed an opportunity to embrace my primary language and instill a feeling that my ability to speak a second language was valued.

Unfortunately, children in a similar predicament are still being overlooked. Services for English-language learners have expanded since the 1950s, but the native languages of ELL students are not widely appreciated. Teachers can make a big difference, though. In my career, I've learned three guiding principles:

Before I could understand how my students learned, I needed to know the context in which they were raised. In 1974, as vice principal of Sylvandale Middle School, in San Jose, California, I walked every street before school started, introducing myself to parents, and began a relationship. I watched the kids play basketball and, using the Spanish I had picked up in the Peace Corps, initiated informal conversation on the court -- whatever it took to gain insight into each individual.

My outreach was intentional and proactive. The home was the foundation on which my students stood. If I failed to understand it, it would be that much harder to break through.

Strategies that benefit all children -- like giving students an opportunity to use their creativity and connect lessons to information they already know -- are particularly helpful for those who feel alienated by language. When I taught at San Jose's Senegal High School, I pulled together a group of students who were nonreaders with behavioral problems to teach them science.

They said, "We don't know science. We're dumb guys." I countered, "No, you all took science -- you just don't know it. You all worked in a kitchen, right? That’s all science, man. When you fry an egg, that's science. You're changing the structure of protein."

As they reminisced about their kitchen experiences, they started laughing -- and learning. These nonreaders realized they had skills they didn't recognize at first. They had been doing scientific experiments already. It was just labeled "making breakfast."

Psychologist William Glasser noted that we learn more through experience than by absorbing what we simply see or hear. This lesson especially pertains to learning English.

When I taught high school, my students were keen to discover the science behind an alcohol still. Despite some pushback from school officials, these students dug through junkyards and flea markets to buy coils, copper, cooling sections, and pots.

Trying first with potatoes and apples, they finally produced a small tube of distillate. We didn't drink it (I warned them it could make them blind), but what stood out was the proud look on their faces as they gazed at what they had accomplished.

If Glasser is right, this still-making process was a poignant pedagogical moment. Conventional? No. But a method capable of inspiring learning, building confidence, and teaching science? Yes. We must be bold in trailblazing the unconventional, because it may capture the curiosity of even the most challenged child.

There's a simple saying that underlies all three of these principles: Seek first to understand, then to be understood. When teachers seek to understand, they can help children see themselves as valued thinkers and students -- and boost their chances to engage and understand. If I were back at Ray Elementary School learning English now, that's what I'd hope my teachers would do for me.