The students who breeze in and out of room 288B at Brooklyn's Edward R. Murrow High School are your typical teens. They chatter, they laugh, and eventually, they buckle down to work on school assignments. The ease with which they navigate the room makes it easy to forget the thing they all have in common -- they are visually impaired. 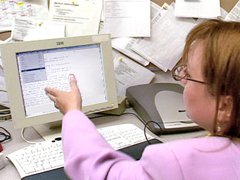 Since the school opened its doors in 1974, a citywide program funded by the New York City Department of Education has been providing resources for Murrow's blind and visually impaired students. "One of our main purposes is to provide learning materials to them in a format that they can use," explains Miriam Bazeley, coordinator of the school's vision unit, which serves about twenty-five students. "So it might be Braille, it might be large print, it might be a tactile graphic."

Increasingly, technology is an important part of that equation. These days, there are more devices than ever to aid students with low or no vision. And, like any teens today, these students are quick to learn the latest gizmos. "They're so with it as far as technology goes," notes mobility teacher Shari Wagschal. "They could probably teach us how to use a new tool faster than we could flip through the instructions."

Room 288B, the school's vision unit, functions as a resource room where students come to study, often with the aid of specialized tools. The assistive technology that's available ranges from the relatively low tech, such as telescopes and binoculars to help them see the blackboard, to more advanced devices.

Among the more sophisticated tools is Braille Lite, a note taker that allows students to type notes in class using a specialized keyboard. A Braille display on the front lets students check what they've written, and an optional speech function reads the text aloud. Students who bring their note takers to the vision unit can hook up the device to a PC to print their notes on a standard printer in large type, or on an embosser in Braille.

Teachers and staff can easily convert the class's handouts into Braille. Vision-unit staff members scan the pages into a computer, use software programs such as Duxbury and WinBraille to convert the text into Braille, and then print it on the embosser.

A poster encourages the visually impaired students who use a special resource room at Brooklyn's Edward R. Murrow High School.

Ideally, teachers provide unit staff with materials in advance so they can make them accessible to the visually impaired students. "Teachers are willing to consider the accommodations that our students need," says Bazeley. "There are schools where they are not willing to accommodate at all. But here, we're in a much better position."

For instance, a teacher might give Bazeley a handout depicting a labeled diagram. Bazeley can create a three-dimensional rendering of the page for students to read by touch. To do this, she copies the diagram onto a new piece of paper, replacing the written text with Braille dots she creates on a computer.

She then copies this new version of the handout onto a special heat-sensitive paper and feeds the sheet into a Pictures in a Flash (Piaf) tactile image maker. As the paper passes through the machine, the heat causes the ink to expand, increasing its volume and resulting in a raised surface.

With the aid of magnifying tools, students with less severe vision loss can often use the same handouts and textbooks as their sighted peers. For example, the vision unit has seven closed-circuit televisions (CCTVs), such as the Aladdin Apex, with screens that magnify material placed beneath the attached camera. Students can read a standard textbook in the font size of their choosing, and they can adjust the color contrast (white on black, black on white, color, and so on) to suit their needs. There are also smaller, portable CCTVs they can bring to class.

To write papers, Murrow's visually impaired students turn to two software programs compatible with Windows to help them work. MAGic Screen Magnification is software that can magnify text and images up to thirty-six times, and it has a speech function that reads screen content aloud. Students often use MAGic in conjunction with the JAWS screen reader. It provides even more extensive speech options, and users can have it read text at a variety of speeds. Bazeley admits that she sometimes must ask students to slow the speech down; they're used to listening to it at a rate much faster than most people can follow.

The technology teachers and students use at Murrow does not come cheap. The city Department of Education pays for it and also buys tools such as portable CCTVs and computer software for students to use at home.

But cost isn't the only obstacle to overcome in bringing such assistive technology to the aid of students. Sometimes the students are reluctant to use the tools because they don't want to draw attention to themselves.

"The kids don't want to stand out in class," Bazeley explains. "There are devices that you could put over your head to help you see the blackboard, but we don't have them. Our kids won't use them. They're not going to walk into a classroom and look geeky."

Bazeley recalls an exception, one former student who didn't mind the curiosity of his sighted peers. "He would take anything into a classroom to look at the blackboard," she says. "He didn't really care. He took it from the perspective that he would show everybody in the room what it was all about, and they would think that it was really neat and cool, and he would be left alone for the rest of the term. But there aren't too many kids who are willing to do that." 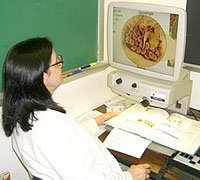 Regina Smith, a teacher of the visually impaired who has low vision herself, tries to encourage students to use whatever devices best help them learn. "One of my soapboxes is that we shouldn't have 'least restrictive' -- we should have 'most enabling,'" she says emphatically. "From the least restrictive point of view, we would go low tech first with a magnifying glass. That's fine for some kids. But I always try to talk them into the device or the piece of equipment or the method that's the most enabling, as opposed to the least restrictive."

Once a student uses them, these "most enabling" tools ensure that visually impaired students receive the same quality of education as their sighted peers. "There's really nothing that is inaccessible to them," reports Bazeley.

"It may take longer, it may be a little more challenging, but the kids really have complete access to things," she adds. "When they learn to use technology that makes life easier, it becomes a source of excitement -- 'Ooh, I want that. I can do it!'"