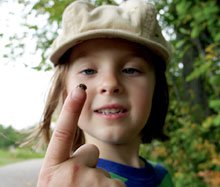 The title of a short story by the great twentieth-century Russian writer Isak Babel came from a constant demand of his mother: "You must know everything." These days, the educational mantra tends to be more like, "You must know a couple of things thoroughly, and the others . . . well, not so much."

As No Child Left Behind tightens the vise on America's education system, many are concerned that with increasing emphasis on English and mathematics, other rich subjects -- art, music, science, history, and social studies--are losing the battle for turf and time. As a generalist and a journalist, I worry that a day looms when all conversations will be about money (math for adults) or Oprah's book club (English lit lite), and when that great TV showplace for polymaths, Jeopardy, really is in jeopardy.

Perhaps a narrowing curriculum isn't really the end of civilization as we know it. Think back to your high school years. Even if you were a straight-A student, how many subjects did you feel passionately interested in? What you cared about most, I'll guess, was not history or science, but the here and now and your own mystifying biology.

Teenagers live in the moment as fully as any Zen monk. They may want to think lofty thoughts, but the down-to-earth problems of who they are and what will become of them get in the way. Their worlds tend to expand only when they're out in the world. Publishers know that the sales of history books skew older, indicating that the more of a past people have, the more the past interests them. When I think of high school, and even college, I remember precious little of what my hardworking teachers tried to drill into my preoccupied head. Probably 98 percent of what I know I've learned since I left college (though, for reasons that escape me, I can still recite the life cycle of the trilobite, learned in Geology 101). Many of us spend our lives making up for daydreaming our school days away, a motivation that has produced some of the best writers around.

Not everyone is an autodidact. I've known successful students whose educations -- beyond what they had to know to make a living -- ground to a halt when they finished school. Their schools taught them how to learn what was necessary to pass tests, but not why learning mattered. Nothing could be sadder, because a hunger for knowledge is one of the greatest gifts any teacher can give a student. In the end, facts matter far less than curiosity. High school graduates don't know everything. Not even close. But if a student sets sail into the future on a quest to know more, teachers have done their jobs very well indeed.