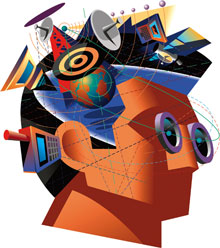 For more than 150 years, the local public schools were our community's temple of knowledge. They dutifully gathered, assimilated, and dispensed the wisdom of thousands of years of insight and learning to the eager (and sometimes not-so-eager) ears and eyes of fidgeting youth. Once you left the school's care, however, as a young adult, you were pretty much on your own to track down the information and wisdom that would lead to a more enriched mind or pocketbook.

Then something dramatic happened. In 1989, researcher Tim Berners-Lee was noodling around in his Swiss lab, working on a way for his colleagues to share ideas electronically on different networks using an odd jumble of computers. He came up with an online knowledge-sharing device: the World Wide Web. By the mid-1990s, new Web browsers produced by companies such as Netscape and Microsoft made sailing through the sea of online information simple; Berners-Lee had inadvertently kicked open a door to the world's knowledge.

Then came the crackling summer of 1995. While a staggering heat wave scorched the country -- New York City had a record-setting streak of twenty-four consecutive days with no precipitation, while out in the Great Plains, a freight train derailed when the tracks warped in 112-degree heat -- Netscape planned something even hotter: It went public. When that offering happened on August 9, the company's stock and its fortunes skyrocketed. Where there is money to be made (and Netscape was making billions), inventiveness and ambition followed.

The rest of the story, writ in large neon letters, has been a redistribution of knowledge that has essentially turned our world upside down and inside out (or is it the other way around?). In the past decade, the easy access to nearly any piece of information imaginable has become an expected part of our daily life. We've been Googled and YouTubed and iPodded so completely that the names of these very companies have seared into our cerebral cortex, even becoming verbs ("Did you google it?") in our daily chatter.

What happened with our schools? Not much. They continued to plod on gamely, passing out paper-based textbook after paper-based textbook, keeping their rooms and halls nearly free of the technology saturating their students' lives. The public-education system was a modern-day Rip Van Winkle, dozing peacefully beneath its educational elm while the distance increased between the technology that schools provided and the daily reality of the world students live in.

Subtly, but inexorably, schools -- or, for that matter, libraries -- were no longer the key holders to the temple of knowledge. A millennia-old arrangement of information distribution disappeared in the time it took for a newborn to reach fifth grade.

The new reality is that the public-education system is no longer the only, or the paramount, place where we go to learn. Most likely, the average child did his or her first Google search on a home computer. For many kids, they probably first logged on to a network (most likely AOL or Yahoo) remotely, using a portable PC a parent brought home from the office. Their first online chat was more likely to happen at home while the child was enjoying Club Penguin than it was in English class.

This shift represents a fundamental restructuring of what public education is all about. Schools must now jump into the river of information provided by business, international groups, and the media and step into a new role: assembler of the collective intellect. Educators must help students sort out the insightful from the ludicrous, assisting them in their new role as capable and critical thinkers. Schools should not shun the seemingly endless variety of outside information sources, but should instead see them as new sources of inspiration for their daily lessons.

In an age when the flow of information was limited and controlled, schools were worthy gatherers of knowledge. That world is gone. Public education has entered a new phase, and it's time for it to catch up to the students it's charged with teaching.