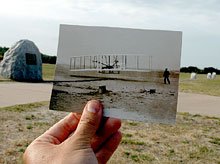 On a windy December morning 103 years ago, along a blustery beach in North Carolina's Outer Banks, the world quietly but inexorably changed.

A few men and a boy had gathered to watch what looked like an awkward rectangular box kite quickly guided down a 60-foot wooden rail. A man lay flat in the center of the contraption, while the craft's tiny four-cylinder, 12-horsepower engine rattled in the stiffening breeze. Just at the moment the craft left the end of the assuring rail, a local resident, on leave from his post at a nearby life-saving station, snapped the bulbous pneumatic shutter of a prepositioned box camera.

The frail wood-and-fabric machine, optimistically named the Flyer, bobbed up and down as the pilot gamely struggled with the sensitive controls. After only twelve seconds, the aircraft crunched to a stop in the damp sand. It had gone just 120 feet; the emotional distance, however, was incalculable. "Success," the inventors telegraphed their father later that day.

After years of struggles and failures, the Wright brothers had done it. Though a generation of experimenters had coaxed ungainly aircraft into short airborne leaps, none had done what the Wrights did on that cold morning. The demonstrations were a full affirmation of their success in creating powered and controlled flights, in a heavier-than-air piloted aircraft.

Wilbur and Orville sailed the Flyer three more times that day, the final flight lasting nearly a minute. A few days later the Wrights headed back to their farm in Ohio. Winter was setting in, and the experiments could continue in the spring.

The aircraft, one of the great technological inventions of the century, was ushered in not with a lot of public fanfare but with quiet satisfaction. Today, the site of that first flight differs little from the miles of beach that surround it. Four markers pinpoint the sites of those early landings, and a visitor's center is nearby.

From such humble beginnings were launched immense social, economic, and political changes. Air travel eventually reshaped our entire planet and the Wrights, unknowingly, germinated what became known as the American Century, as the world became immeasurably shaped by the changes coming from the United States.

That now-legendary photo of the Wrights's first flight should serve as an inspiration for educators everywhere. Too often, the wind is blowing in our face, the conditions are not quite right, and the craft we're piloting seems terribly flimsy. Yet, when it goes airborne, incredible changes result. Small victories lead to immense change.

But this time, the United States can't do it alone. It would be myopic to believe that we in America have all the answers to the great problems of education. Clearly, we don't. We can, however, learn from the ideas of educators overseas. Just as the world has become flat in terms of politics and economics, it must also flatten when we talk about exchanging our views about education. That is what this, our first international issue, is about -- the great ideas we may learn from others and, potentially, the changes that can occur when the planet is our classroom.

A few weeks back, I spoke with Alvin Toffler, the noted futurist who authored the landmark book Future Shock. He told me that he thinks we should have an international teacher-exchange program modeled after the student-exchange programs so popular today. In fact, that is starting: Teachers from Spain, China, and many other countries are now infusing U.S. classrooms with the myriad languages and cultures of our globe. There are also programs that send American educators overseas to teach alongside their international counterparts. These are immensely powerful ideas, growing in popularity, whose potential is just beginning to be realized.

I'm hoping that this century might ultimately be called the Education Century and that our plane, like the rudimentary but important machine the indefatigable Wrights built, is running down the rail and ready to lift off.