For this special issue, we engaged a special guest to pen our Editor's Note. Bill McKibben is one of the leading lights of the environmental movement, a man who combines head and heart as he inspires and illuminates. We can think of no one better to open our first Green Issue.
--James Daly, Editor in Chief 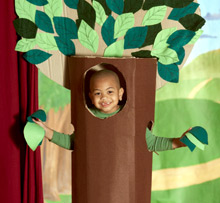 If education is defined as something that prepares students for the future, then in schooling, there's no escaping the need to deal with global warming. There's nothing -- not terrorism, not technology -- that will affect the adult lives of today's kids as much as the coming shifts in the basic physical stability of the planet, and the measures we'll need to take to deal with them. And nothing, happily, is as useful as climate change for teaching kids about how knowledge interacts across disciplines, and about why knowledge counts.

The science part, of course, is obvious -- and the good news is that the basic physics and chemistry of climate change are fascinating and relatively easy to understand. If nothing else, students need to know just how ubiquitous carbon dioxide is -- they need to understand that if you burn a gallon of gasoline, you produce 20 pounds or so of carbon dioxide. Until you understand that, in your gut, it's hard to figure out why dealing with this problem is going to be so hard.

Unlike other pollution problems, which usually involve technical fixes to reduce the output of something noxious, fighting global warming means getting off fossil fuel -- it means leaving coal and oil and gas behind. This will be of interest to history classes, because it's with coal, oil, and gas that the Industrial Revolution began, and mass affluence started to spread. It's probably the most important historical development of the last 500 years.

Some of the solutions to climate change will involve new engineering -- all the sexy stuff like solar panels and hybrid electric cars that kids enjoy investigating. But it's likely that more of the answers will come from changing habits and ideas -- that is, from social studies and psychology.

Here are some questions I'd ask students:

For me, the best thing about questions like these is that they emphasize both the need and the hope for real transformation -- and that hope is crucial, given the bleak reality of onrushing climate change. I worry that, in the face of these changes, young people will become too depressed to want to act. It's scary, and scary things can cause us to turn away.

Instead, we need to be drawn in, seduced by the pleasure of imagining new futures. Because plan A -- going on just like we are now -- won't work, we need a plan B. And the younger you are, the easier it is to envision that plan B, because you're not as locked in by decades of habit or economic necessity.

But it's not just because students are young. It's also because they're in school, which is to say part of a community. In a society as hyperindividualistic as our own, that community may be the single most important ecological lesson a school has to teach: the simple power and pleasure of functioning as a community.

Just to walk outside and see the line of yellow buses is to remember that your town already has a mass-transit system. Simply to think about recess is to understand the pleasure of doing things together, not one by one. Those lessons about community -- about how to work with one another -- will be more important in solving the environmental crisis than any piece of new technology.

Bill McKibben is the author of a dozen books on the environment, including The Bill McKibben Reader: Pieces from an Active Life, and a founder of Step It Up 2007, which has organized the largest demonstrations against global warming in American history.