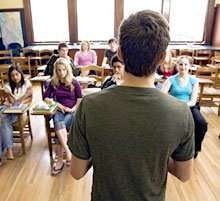 When tennis star Andre Agassi played -- and lost -- his final game at the U.S. Open in the early fallof 2006, he waved and bowed to a cheering, full-housecrowd of fans at center court in the ArthurAshe Stadium, in Queens, New York. At the official moment of his retirement as a professionalplayer, Agassi, who had evolved from an enfant terrible to an eminencegris during a long career, was approached by a television reporter witha microphone in hand, prepared, no doubt, to ask the usual roster ofobvious questions ("How do you feel now that you've played your lastmatch?"). Agassi politely took the microphone and, looking up at thecrowd, said:

"The scoreboard said I lost today, but what the scoreboard doesn'tsay is what it is I have found. Over the last twenty-one years, I havefound loyalty. You have pulled for me on the court and also in life.I've found inspiration. You have willed me to succeed, sometimes evenin my lowest moments. And I've found generosity. You have given meyour shoulders to stand on, to reach for my dreams, dreams I couldhave never reached without you.

"Over the last twenty-one years, I have found you. And I willtake you and the memory of you with me for the rest of my life.Thank you."

There may have been a dry eye in the house, but not in my house. It'sdoubtful that anyone at the stadium that day will forget the feeling theyhad when Agassi said his fond farewell. As speeches by athletes go,Agassi's eloquent words rank right up there with the ailing Lou Gehrig'sgood-bye to the fans at Yankee Stadium in 1939.

This issue contains a story by staff writer Grace Rubenstein on thecrucial and perplexing subject of educational assessment. In the era ofNo Child Left Behind, when un-nuanced numbers have become the primarymeasure of a student's learning and intelligence, the economicaleloquence exhibited by Agassi is an unfairly neglected metric.

Sadly, too, the ability to say well what one thinks has generally fallen on hardtimes, especially among teenagers. The usual suspect is television, towhich we can now add the crude new compressions of text messaging.But a suspicion of well-formed speech probably predates the impoverishedlexicon engendered by television's dumbed-down vocabulary(with some notable exceptions). For generations, now, anyone goodwith words in middle school and high school has risked being labeleda "smart guy" or a "teacher's pet" or worse, so the best we've come toexpect are the florid banalities of graduation valedictories.

This has not always been the case. When the actors inthe Globe Theatre spoke the great St. Crispin's Day rallying speech inShakespeare's Henry V, the commonest listeners in the audience understoodevery stirring word. The letters from soldiers that Ken Burns usedso well in his Civil War documentary showed how poetically ordinaryyoung men once expressed themselves. And the commonly held ideathat eloquence is the same as flowery, excessive verbiage can be instantlyscuttled with a reading of the brief, unforgettable words of AbrahamLincoln's Gettysburg Address. Martin Luther King Jr.'s "I Have a Dream"speech was powerfully metaphoric, yet it was spoken in a way instantlyunderstandable to everyone in America.

The self-censoring of eloquence may seem a small thing in the faceof our oft-noted decline in math and science skills. But speaking withgrace and clarity is as potent a life skill as any student will ever carryaway from school into the larger arena of life. Eloquence carries withit the power to inspire, to convince, to lift the spirits or raise a defenseagainst malevolent ideas, and -- not least -- to impress those who canlend a helping hand up many a slippery slope. How does one teach eloquence?Well, a book of great speeches might be a start, or simply typing"John Gielgud" into YouTube's search engine. But the first step is thehardest: Convincing young people that eloquence is cool. A tough job,but truly, to use an ineloquent cliché, a gift that will keep on giving.