As part of our special report on federal stimulus dollars in public education, we reached out to a handful of opinionated people to ask where this much-needed money should be spent. With so much to improve, it isn't easy to identify a top priority for education funding, but this eclectic group of experts offered some interesting choices.

Their ideas, along with articles on the impact of massive federal education spending and the policy underlying this infusion of cash, will appear on Edutopia.org soon and in the August/September issue of Edutopia magazine (arriving in mailboxes in early August).

The question: "The nation's public schools are slated to be major -- and deserving -- benefactors of President Obama's American Recovery and Reinvestment Plan. What should be the first priority for education spending?" 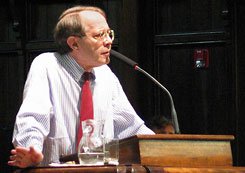 Author of The Shame of the Nation and Savage Inequalities

"The top priority: three full years of federally funded, culturally rich, developmental preschool education of the same high quality wealthy people purchase privately, made available to every child of low income in the nation. Until we do this, the testing of children in third grade, as demanded under NCLB, will be blatantly unfair, rewarding children of the privileged for having already had twice as many years of education as the children of the poor."

Former U.S. secretary of labor, professor at the University of California at Berkeley, and author of Supercapitalism

"The first priority for education spending on public schools -- apart from the obvious ones of early-childhood education, better teacher pay, smaller class size, smaller schools, and better teacher accountability -- is one that's rarely talked about: making sure young people are healthy enough to learn.

It's impossible for kids to learn if their teeth hurt, they can't see well, they can't breathe easily, and they're hungry. Yet 30 percent of the young people in some of our poorest school districts have untreated dental problems, uncorrected vision problems, untreated asthma, and inadequate diets. The two -- education and health -- go together."

"Stimulus money being sent to schools should initially be spent on two projects: Matches can be purchased to burn all standardized tests, ending the absurd notion that these exams have anything to do with educating a child and preparing him or her for life. Leftover funds should be spent on travel expenses for great young instructors to observe and learn from outstanding public school teachers with classes that are rigorous, relevant, and joyful."

"The stimulus funds present a big danger by affording schools the opportunity not to change. To the extent the federal government funds new programs, it should transform public education by not funding the old, monolithic system and instead invest in the emerging, disruptive one."

"I would install the Core Knowledge curriculum in every school and educate every teacher to teach it. Thus, every child would learn history, science, literature, the arts, and more. This would not cost much, and the balance could be used to create health clinics, social services, and jobs."

"Recognizing the link between education and our future prosperity, President Obama has made education a top priority. What most encourages me about the stimulus funds is that he is holding us accountable for using citizens' dollars wisely, in innovative ways that can drive student achievement forward and prepare students for professional life. This can include radical changes and improvements for Title I schools for our children in highest academic and economic need."

Founder and CEO of Teach for America

"We now have evidence of individual classrooms, schools, and even clusters of schools that are changing the life trajectories of kids in low-income communities. The stimulus funding provides a unique opportunity to scale up successful initiatives and reach more children in the highest-need areas."

Cofounder of the 826 National writing centers and of the Teacher Salary Project, member of Edutopia's National Advisory Council

"The single most important change we need is to elevate the status of public school teachers and transform the profession into one that is truly prestigious, wildly competitive, and financially attractive. Until we get and keep the smartest teachers in the classrooms, I fear that none of these other reforms, no matter how well designed, will truly achieve what we so desperately need for our schools and kids."