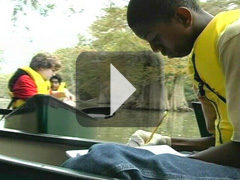 When Mansfield Elementary School, in Mansfield, Arkansas, had to cancel its field trip to Blanchard Springs Caverns because of rising gas prices, it didn't take a group of nearby high school students long to rally: If the elementary students couldnt travel to this awe-inspiring underground cave system in the Ozark-St. Francis National Forest, the high school group would bring the caverns to the kids.

Over one week in the summer, six students from Mansfield High Schools Environmental and Spatial Technologies (EAST) Initiative filmed the caves, mapped them with a global-positioning-system device, interviewed the man who first explored the caves half a century ago, and created a virtual tour complete with animated cartoon guides.

This high tech project typifies the level of ambition and service-oriented thoughtfulness championed by the EAST Initiative. Started by Tim Stephenson, a teacher at Greenbrier High School, in Greenbrier, Arkansas, the initiative has grown into a nationwide program that uses technology to promote self-directed, performance-based, collaborative learning. Thanks to funding received through individual grants, schools in the program are able to set up the tech labs necessary to perform community-based projects under EAST's pedagogical guidance.

This approach flies in the face of a National Center for Education Evaluation and Regional Assistance study published in April for the U.S. Department of Education that concluded technology in schools fails to increase student achievement. What makes EAST different is the engine running it, says Natalie Tolbert, a Mansfield High School teacher and lab director. This engine includes teacher training, technical professional involvement, and two yearly conferences (one each for lab facilitators and students).

"What makes EAST work is the undying dedication of the people behind it," Tolbert says. "If we didn't have this dedication from the staff -- the training and administrative support, and everything else we need -- this program couldn't work."

Instead of emphasizing technology for its own sake, EAST recognizes it's a tool for creating a stimulating learning environment, says program president and CEO Matt Dozier. Students are encouraged to "take ownership of their own learning and be actively engaged in their communities," he explains, and are allowed to work at their own pace, without the usual time constraints of a typical classroom. And the lab facilitators don't give students solutions to problems; instead, they gently guide the students in finding the answers on their own.

The labs create a symbiotic relationship with standard school curriculum. "EAST is a place where students can take all the stuff they're learning somewhere else and apply it," Dozier says. "If you want to do animation, you have to know geometry -- and, all of a sudden, you have a reason to go to geometry class and pay attention, ask questions, and challenge the teacher. And then, all of a sudden, the teacher seems a little more lively in the classroom. Guess what just happened? We changed the entire educational experience."

Tolbert has seen this transformation happen. "The EAST kids who do really well are the kids who lack interest in their core classes because they don't have freedom of expression there," she says. "The rules don't work for them. But they come into EAST -- where they can make their own rules as long as they're on the right track -- and they do really well."

One example, Tolbert recalls, was a lackluster student from a poor family. Through EAST, the girl got involved in a virtual reality project, where she was able to apply her writing skills to the scripts. "She just loved it," Tolbert says. "Now, because of EAST, she is going to college and majoring in graphic design."

For Tolbert's students, the Blanchard Springs Caverns project has literally been an enlightening experience in problem solving. "The first day we filmed in the caves, we ran into our largest problem," she says. "All of our equipment was state of the art, but the caves were almost pitch black. No matter what we did, we couldnt get the pictures we needed. The students regrouped and went to Wal-Mart for external lighting, and on day two, the filming was so much better.

"At the end of the day, the job of the institution -- whether an elementary school, middle school, high school, or college -- is to provide the skills, content, and power to build on education, Dozier says. If we wake up in a new world every morning -- and, if you look at it, in some ways we do -- we need people who can thrive in that culture."