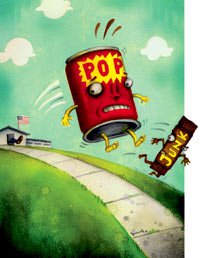 There's big money in junk food. And big students are often the result. Yet schools continue to offer heavily processed high-sugar food in their cafeterias and vending machines, arguing that deals with vendors bring in much-needed funds. Case in point: The Colorado Springs, Colorado, school district is expected to get around $8 million over ten years for a deal it signed several years ago to sell only Coca-Cola products in its vending machines.

While school officials often admit that giving students easy access to chips and soda may not be the wisest way to make money, they note that the cash can pay for underfunded music or sports programs.

It turns out, however, that Pringles aren't the only road to riches. A health-food pilot program launched last year at San Francisco's Aptos Middle School, which used to sell "all kinds of junk food," according to PTA representative Caroline Grannan, has turned out to be a financial -- and nutritional -- success.

Grannan, the mother of an eighth grader at the school, says that by replacing prepackaged foods with fresher and less expensive raw materials and by offering tasty but healthier snacks, the school was able to keep costs low and nutritional content high. In its cafeteria, Aptos chucked Slim Jims, nachos, and cheeseburgers in favor of fresh deli sandwiches, sushi, pasta, homemade soups, and fajitas -- foods that are kid friendly but not junky. The school also cut a deal with yogurt maker Stonyfield Farm.

Aptos students easily adapted to the more nutritious offerings, but the clincher is that the school actually made money from the switch. School food service officials reported that after the changes, revenue from the cafeteria and vending machines actually increased. The cafeteria, which was losing money before the program started, ended the year $6,000 in the black. Revenue from locker room vending machines increased as well; the school gets a cut of what they bring in, and kids started buying more water -- at a higher price -- than soda. Best of all, teachers at the school commented on students' improved behavior and performance in class. "There's an assumption that we need to sell junk," Grannan says. "We don't."