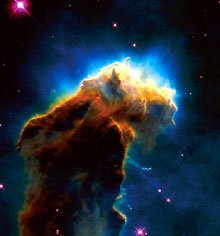 For more than thirty years, physicists have described the basic building blocks of the universe using a tidy framework called the Standard Model. This model contends that everything we see is made up of protons, neutrons, and electrons that are in turn combinations of a dozen elementary particles called quarks and leptons. Four forces bind the bits together: electromagnetism, the strong and weak nuclear forces, and the feeblest of the lot, gravity.

The result is life itself, ranging from atoms to the brilliant energy of the stars. The Standard Model has had a good run, nicely (and quite precisely) predicting the complex interactions of subatomic particles.

Recently, however, data gathered from the recesses of deep space suggests that the Standard Model has become, well, substandard. Neil Calder, director of communications at Stanford University's Linear Accelerator Center (SLAC), in Palo Alto, California, says of astronomy's wake-up call, "Physicists got a slap on the face. Now we're back at the caveman stage."

While feeling Paleolithic, physicists have had to take a new look at the aftermath of the big bang, the cataclysm that most agree created the universe. The Standard Model says that for every particle of matter there exists a corresponding negative particle, known as antimatter. When the universe formed, the cosmic battle between these two forms should have ended in total annihilation. But matter emerged victorious: Everything we see, including stars, is made of it.

The problem for the Standard Model is that only about 4 percent of what is thought to make up the universe can be seen; the rest is invisible. Scientists theorize that nearly three-quarters of the total is dark energy, a mysterious substance that continues to accelerate the galactic fireworks caused by the big bang. The remaining 25 percent is dark matter. Without dark matter, there wouldn't be enough gravity to prevent fast-spinning galaxies from flying apart. Yet no one knows what dark matter is, how it works, or why visible matter dominates the scene.

It's enough to cause a powerful itch on a prognathous chin.

Like visible matter, dark matter may also be made up of particles. At present, the leading suspect is a WIMP, shorthand for "weakly interacting massive particle." So far, the WIMP is inferred rather than captured and examined -- like another hard-to-capture particle, the neutrino, WIMPs can pass through matter without interacting with other particles. Researchers at Stanford recently were able to make a strong case for dark matter by measuring particle speeds as two distant clusters of galaxies passed through one another.

But physicists hope that a new generation of supercolliders, able to smash protons together at the speed of light, will so closely replicate the primordial chaos of the big bang that they will uncover evidence of WIMPs. The energy of the collision will be compared to the sum of the energy of each particle that scatters afterward. Then the basic law of conservation of energy will help prove WIMPs exist. If there is energy missing, with no corresponding particle, that should point to the presence of the elusive WIMP.

Finding a WIMP more definitively will be an enormous challenge. JoAnne Hewett, a particle physicist at SLAC, explains that WIMPs interact with other particles via the weak force, meaning acres of exotic metals can't detect them -- and physicists are building detectors of heavy metal larger than football fields. The WIMP seems to be a good news/bad news particle. The good news, Hewett says, is that "we think they're stable, because if they decayed, we wouldn't have the abundance of dark matter in the universe." The bad news, as far as the search is concerned, Hewett adds, is that WIMPs are also neutral, carrying no electric charge. "If WIMPs were charged, they'd interact with photons and we'd be able to see them as visible light," she says.

Not everyone agrees with this assessment. Jonathan Feng, a professor of physics and astronomy at the University of California at Irvine, predicts that a big enough collision might show that WIMPs not only decay but also carry a charge. Instead, dark matter could be made up of charge-neutral SuperWIMPs, the decayed product of WIMPs. If WIMPs are in fact charged, Feng imagines them as "electrons on steroids," massive entities that could set off bells and whistles on the detectors.

Either way, it will take new technology to settle the debate, such as the gigantic subterranean Large Hadron Collider, on the outskirts of Geneva, Switzerland, scheduled to switch on next year. Trawling for WIMPs may work, too. Because, as Feng has metaphorically puts it, "dark matter can travel a light-year's distance in a block of lead before it interacts with something," scientists hope to snare the shy particles in highly sensitive detectors placed deep underground.

A bona fide WIMP sighting would be a big deal for particle physics, tantalizing scientists with evidence about the titanic struggle that produced the big bang and the makeup of the dark universe, as well as unveiling a new family of particles. The Standard Model of physics would then come with exciting new options, nicely equipped for the coming millennium. You may want to place your order now.

Christopher Thomas Scott teaches stem cell biology and is executive director of Stanford University's Program on Stem Cells in Society. He is the author of Stem Cell Now.