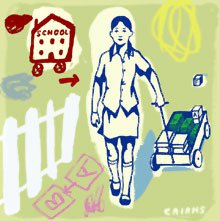 As an education-policy analyst, it has been my good fortune to visit many appealing high-performing schools. On many occasions, I have been struck by a sense of "good-school envy," a sensation in which I begin to fantasize about moving my own family so that my children can attend the school I am visiting.

For example, while visiting the Seed School in Washington, DC, a public boarding school that serves the most disadvantaged children in the city, I wanted my children to live in a "house" devoted to getting its students admitted to Yale or Harvard or Princeton. I loved the Harry Potter feel of it all and the constant air of high expectations for every child.

Similarly, I was ready to relocate my kids to Tucson, Arizona, where they could attend the Academy of Math and Science, a place where Lego competitions, robotics, science fairs, and geography bowls are so integrated into the curriculum that every child plays some significant role in academic competition.

The irony of this feeling is that I could move anywhere, and my kids already have many options.

Yet for the kids I wrote about in the study "No Choices Left Behind: Competitive Models to Restructure California's Lowest-Performing Schools," "good-school envy" takes on a completely different meaning. That version is an envy that can be felt only by those attending schools where safety is a significant issue, where cleaning the school bathrooms has become a more desperate priority than math instruction, and where the majority of students are performing far below grade level.

California has 2,215 schools labeled "needs improvement" by federal standards under the No Child Left Behind Act. And though many critiques and arguments have been voiced over the fairness of measuring public schools under NCLB, most reasonable people can recognize that something is wrong at a school such as Compton High School, in the Los Angeles suburb of Compton, where fewer than 6 percent of tenth-grade males can read at grade level and less than 1 percent can do algebra.

What I learned through my California adventures is that these schools can change. I believe that the best hope for children in low-performing schools is to restructure school financing to a weighted-student-formula plan in which funding follows each child and is based on each child's individual needs.

Under this program, kids are not required to attend their neighborhood school, especially if it is failing. Rather, they can pick any regular public school in their community's school district and take their education dollars with them; more students means more revenues for schools. Furthermore, as the name suggests, the revenues are weighted, based on the difficulty of educating each student, with low-income and special-needs kids commanding more money than less needy, well-to-do ones. Schools have to compete for funding, but the upside is that they have more control over it.

In his 2007 State of the City address, New York City mayor Michael R. Bloomberg called for the weighted-student-formula plan for all city schools. One week later, Jim Gibbons, governor of Nevada, echoed Bloomberg's proposal with his own plan, which would affect more than a hundred schools and empower families with greater educational choice.

These school leaders are choosing this school-financing reform because it works rapidly to transform existing public schools. It is not a coincidence that San Francisco, in its sixth year of a weighted-student-formula plan and a school-choice policy, is the highest-performing urban district in California.

My hope is that children in California's lowest-performing schools will one day have good-school envy because they will have too many high-quality choices. I hope these families will know what it is like to enroll their children in a school based on the merits of that school rather than on their residential address. I hope for the day when all public schools will be schools of choice and most will be the envy of many families.