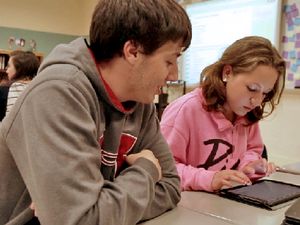 I'm a San Marino High School (CA) social studies teacher who has increasingly sought to connect students in my US Government, World History, and US History classes with the “world-at-large” using video conference technology.

Over the past twenty-four months of experimentation, I have learned that video conferencing technology can provide any/all students with a highly rewarding, innovative, and engaging experience that empowers them to connect to their own learning process. My students connected via video conference with:

Also, this technology is not just for the benefit of the high school social studies student. It spans across all all grade levels and all subject areas, including science, math, etc. It is also conducive to the special education classroom. All benefit from this.

For best results, I suggest using the video conferencing technology listed below:

I also suggest formatting the video conference similar to that of a television talk show where:

To ensure that the host and audience members ask the guest(s) high quality questions during the video conference, teachers should do the following:

Above all, I highly suggest working with your school's technology staff well ahead of the scheduled video conference to ensure that all the technology works as it should. The SMHS/SMUSD technology staff has provided immeasurable support in this regard.

For a brief description of the video conferences my social studies students have benefited from over the past two years, please see the examples below.

Names in the News

Names in our Textbook

Mary Beth Tinker - the petitioner in the 1969 Supreme Court case of Tinker v. Des Moines, a case in which the court ruled that Warren Harding Junior High School could not punish Ms. Tinker for wearing a black armband in school in support of a truce in the Vietnam War. The case - which is mentioned in most US Government textbooks - set a precedent for student speech in schools. Aside from describing the case, Ms. Tinker answered questions such as:

Jonathan Eig - Jonathan Eig is the author of “Opening Day: The Story of Jackie Robinson’s First Season.” Mr. Eig not only told the students about his book, but also addressed questions such as:

Christina Fahad - a Burbank High School mock trial teacher-coach, who’s especially known for her ability to teach the 'hearsay rule'. She teaches it in such a direct way so the students grasp the concept. The goal of this video conference was to give my school’s mock trial team, - which I coach - a chance to learn the 'hearsay rule' from Ms. Fahad’s perspective as an addition to my instruction on this topic.

Susana Bautista - the Director of Public Engagement at USC Pacific Asia Museum (Pasadena, CA). For this video conference, Ms. Bautista provided my students with a tour of the museum’s 'Ikko Style Exhibit', which highlights the work of master Japanese graphic designer Tanaka Ikko from the postwar period. It reflects on how Japan was changing during this critical time and how Ikko was central to helping form that new image.

Students From Other Schools