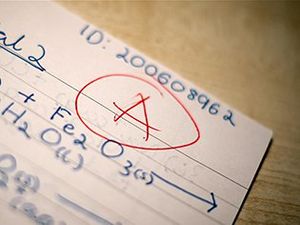 Photo Credit: thebarrowboy (CC BY 2.0)
Consider the following scenario. In an effort to make learning, not grades, the emphasis in his classroom, a teacher is proposing that next year he will give every kid an “A” in his class, no matter what, essentially taking grades off the table. Write a letter to this teacher evaluating and judging his proposal.  In addition, indicate how  you would personally respond to this approach if you were a student in his class next year.

I know that, as a high school student, I only do the stuff for grades. I do learn a bit, but generally forget it after the test. In high school all kids care about are grades. It seems like our entire future is dependent upon them. It takes away from the purpose of school, which is supposed to be to learn. If we’re just given an A for the semester, then we could focus on the thing that matters, learning.

We need good grades to graduate, to get into a good college, and so our parents don’t kill us. It is a huge stress for us. I think when we go to school, we completely forget that our main reason for being there is learning.

If grades weren’t a factor, then we could focus entirely on our learning. Grades are such a stress that they take away from all of that. It would also be easier for the teachers. They could focus on teaching the content instead of grading papers.

If one of my teachers were to do this, I would be overjoyed. Grades are a huge stress for me, and it would be nice to be in a class where I didn’t have to worry about them, where I could focus on the learning. I think this teacher should strongly consider this, for it would give them and the students a much better classroom experience.

I work hard. I have good grades. I make sacrifices. I focus on my learning. So the fact that you’re going to give kids A’s who don’t do those things is wrong. I strongly and firmly believe that.

Although I understand that you want kids to focus on their learning instead of their grades, in reality our motivation for learning is our grades. Grades should be something earned and not given. I know that personally I would not put in as much effort to learn if I knew I already had an A. I work hard because I want an A and because it affects my future.

I also recognize that grades don’t always determine smarts; however, you can’t tell me that I, who has an A, didn’t put in more effort to learn than a student who has a D. Grades separate the kids who will go far in life from the ones who won’t. Please don’t close this separation.

In closing, I would like to ask you to reconsider your decision to give every kid an A. Thank you for listening.

Of course, Dickens was not talking about education here, but he could have been...Either way, it speaks to me now.

Nothing before me..., except a decision. Of course, it would be disingenuous to claim that my mind was not made up prior to my having the kids write their letters. I knew where I was going. I just wanted to gather some student input along the way. And, even if I had not already made my decision, I would have had to anyway based on the data (see below).

I shared Isaac and Meghan's letters because they represent the divide that I face, the ends of the spectrum. Both make relevant, valid points. In fact, each astutely represents his and her respective camp: "good idea" and "bad idea." And although I get what each is saying, I lean to Isaac's side. What's interesting about Isaac's letter is that it is the only essay that he has turned in on time--all year. In fact, it may be the only assignment he has turned in on time (although he eventually gets them in). I have to believe that this speaks to motivation on some level. When people are truly motivated, they will contribute. I believe Isaac would be more fully and deeply engaged in my class next year and maybe hate it less, making greater contributions not only to his own learning but also the community's.  Meghan, on the other hand suggests that she would be less-engaged without grades, but she is so conscientious and such a hard worker that I believe she would fully and deeply engage in my class next year--without the grades. It's just who she is. In short, I believe the new approach will not harm the Meghans of the world. But, and this is a big but here, folks, I believe with all my heart that the new approach might truly help the Isaacs of the world. In fact, I'm betting the farm on it. And while I had made up my mind prior to seeking input, I did listen to the kids. Always listen to the kids.

What the data revealed. Good Idea = 42%. Bad Idea = 38%. Good and Bad Idea = 20%. Essentially, then, my initial analysis is that, among the kids, it's a wash. I expected as much. I also expected, or rather, was not surprised by their reasons, reasons which reflect the rationale in each of the letters above. For the "good idea" kids, they generally pointed to less stress, more emphasis on learning, etc. For the "bad idea" kids, they mostly brought up fairness, kids taking advantage, kids not doing anything, and so on. Again, nothing I didn't anticipate and things I will certainly consider as I move forward with my decision, a decision that will no doubt seem wise to some and foolish to others. Decisions, indeed.