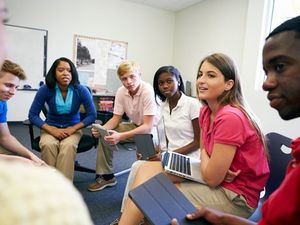 In the United States, you have to be living under a rock not to have seen the historic ruling about what we now call marriage. In Obergefell v. Rodgers, a 5-4 Supreme Court stated that under the Equal Protection Clause of the 14th amendment, states are required to allow persons of the same sex to marry. Social media exploded with rainbows, pride, marriage pictures and even some condemnation.

As both a lawyer and a teacher, I grappled with a nuance: how do we teach our children debate in the midst of an ever-changing climate? How do we, as teachers, use cutting edge decisions to hone rhetoric skills? Although this discussion could take many turns, I would like to offer a few ways to encourage mindful classroom debate while introducing issues of the day.

I have found, through studying, observing and teaching in many classrooms, that teachers choose to ignore issues of the present day. When I was in my last year of high school, there was a very famous presidential election and an equally famous court case to resolve the outcome, Bush v. Gore. What complicated the matters even more in the eyes of ths particular student population was that George Bush had attended my high school.

What struck me about some of my magnificent teachers and was emblazoned in my mind what kind of teacher I wanted to be was their mastery of allowing and encouraging civic dialogue without being pedantic or one-sided. I was also able to learn about issues of law and politics at an early age which shaped my desire to both teach and advocate.

I advocate for establishing student-created classroom rules, especially as it pertains to argument and teaching. When you are creating your normative and expectation document, ask your students how they want to discuss the issues of the day? How do they want to be heard and how do they want to learn possibly new activity? What sources do you like for grappling with issues that are on the cutting edge of our consciousness?

Even when you are discussing hot topic issues, make sure that evidence is required. This is a classroom, not a session of psychotherapy (although it can sometimes feel like that). When discussing particularly dicey issues, remember the importance of citing evidence for every declarative statement. This also ties back to your CCSS about argument and tying argument to context and evidence.

4. Explore the Difference Between Fact, Feeling, and Argument

This best practice works in conjunction with number 3. Teach about these three concepts and instill argument skills in your students to equip them with the abilitiy to "defend" each.

For example, ask questions to clarify if the student is asserting a fact, a feeling or an argument. How do we know it is a fact? A fact is a specific detail based on an objective truth. A feeling or an opinion is a value judgement that can neither be proven nor disproven. An argument is a way to utilize facts to validate your opinions, it can be considered a fact-filled opinion.

Again, using these concepts as scaffolds and requiring the identification of the building blocks of successful argumentation will keep the peace when the blood is boiling.

5. Resolution is not the End Goal

This is perhaps the most important point of teaching the hard issues, the goal can’t always be resolution as that can and likely will show your own bias and belief and make many students feel uncomfortable. The discussion and the exploration of the "hard" issues is a goal in and of itself. It can be clarifying to start the discussion with, "This will just be a discussion. Do not worry about a resolution. I may have questions for you, but I truly respect your voice and opinion."

Allow the space for a discussion without an end goal (or having the end goal be a civil, civic-minded discussion and having an informed classroom). Give your students the space to explore mindfully in an evidence-rich environment, allow the conclusions to come (perhaps) many years later and be the teacher who allowed comprehensive rhetoric and occasional argument without judgment and watch the conversation flourish.

I read recently a comment on the importance of establishing a “yearning for learning” in my last post in teaching advocacy. I think this cannot be minimized, even when we are talking about the tough issues. Establishing curiosity, respect and even ground rules around the hot political topics of the day will allow your students more creativity, as well as allowing them to profoundly explore and understand that they are a part of history and that their dialogue, advocacy and compassion informs national debate.

Although not included in the list would be this bonus tip: let your students and their parents know that you will be tackling these tough issues with as little bias as possible and the goal of increasing civic participation and argument skills.

Let me know in the comments below how you have the tough conversations and manifest social consciousness in your classroom.