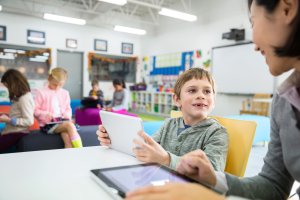 “Do you have to love your students in order to teach them?”

This question was posed to me during an interview for admission to the master’s program at Roosevelt University. The man asking the question looked like Santa Claus in a tan sport coat. He held a clipboard to his chest, blocking his notes from my view. His legs were crossed, and one foot tapped hastily in the air.

“Hmm,” I replied. Of all the possible interview questions, this was one I hadn’t considered. My mind raced as I stalled for time.

The program I was applying to was called the FACE program. FACE stood for Facilitating Accelerated Certification for Educators, and the program was being offered by Chicago Public Schools to attract new teachers into the field of special education. It offered a master’s degree, a learning behavior specialist (LBS-1) license, and a chance to teach right away.

I desperately wanted in.

“What exactly do you mean by love?” I asked, trying to buy more time.

“Do you have to love your students in order to teach them?” He restated the question simply, as if he had been instructed to say only that, offering no further explanation.

The man stared at his clipboard. He was probably wishing I would just answer the damn question so he could move on. My hesitation was making us both uncomfortable.

Ultimately, I gave my best politician response, rambling on about how important it is to care about students and believe in them. I made sure to add I believed all students could learn and be successful, but I never really answered the question. Years later, I still wonder about it.

Was his question designed to weed out creepy pedophiles? Was it a trick question?

As a young, inexperienced and idealistic prospective teacher, I didn’t know the correct answer. And 14 years of teaching later, I’m still not sure I do now.

Here’s what I do know.

I know my heart broke when Selena told me her parents were getting divorced. Her face flushed with anger as she furiously typed an essay called “The Worst Thing Teenagers Face Today,” detailing her parents’ divorce. She handed her draft to me and immediately asked to go to the bathroom, pain and tears seeping from her eyes.

I know my heart melted for Matt, the sensitive 13-year-old boy with big glasses and a giant heart that broke when he couldn’t understand or believed others were upset with him. Watching him hold back tears, trying not to crumble with defeat, I forever wanted to be his cheerleader.

I will never forget Cameron, the tiny boy with explosive behaviors. He often ran from our classroom, screeching down the hall, overturning desks and scattering and papers in his path. Over the course of the year, his behaviors became more controlled and happened less often. He learned to ask for a break or proactively remove himself to our bean bag chair. Cameron started giving me long, tight hugs and often didn’t let go. Many times, he called me Mom.

Thinking back on many of my students, my heart swells with love.

So maybe the answer is yes?

But I would be lying if I said I loved every student. Memories of other students do not generate the same overwhelming feeling of love and nostalgia. In fact, quite the opposite. But I did teach those students.

So is the answer no?

I am thankful that somehow my bumbling response to the interview question got me accepted into the master’s program and gave me the opportunity to be a teacher. Teaching has given me a unique career experience. But does it require love?