I am a San Marino High School (CA) social studies teacher who for the past fifteen years has aligned my US Government course curriculum to the California State Content Standards.  Additionally, I have incorporated into each of my classes discussions of current local, national, and international news and events. 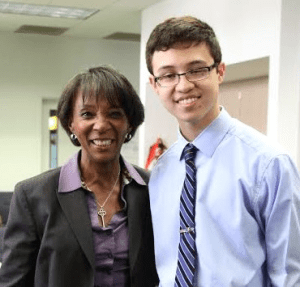 To deepen student understanding, I created the SMHS Civic Learning Meet and Greet Program where students enrolled in my US Government class have opportunities to hear and learn from individuals appearing in either the textbook or the newspaper and who are connected to the subjects of government, law, history, politics, and education.

A typical “Meet and Greet” is designed to last no more that 50 minutes. It is formatted similar to a television talk show with the host, sometimes a student, sometimes the editor-in-chief of our town's local newspaper, and sometimes me, opening the “Meet and Greet” by asking a number of introductory questions before giving the students a chance to ask questions of their own.

Most often, speakers appear in person before the class for the interview, though on occasion, guests have also been interviewed remotely via speakerphone and/or videoconference call.

Suggested guidelines if you want to bring the Civic Learning Meet and Greet Program to your school:

1. Invite your guest to speak before one class of students only. Most individuals are more than open to a no-more-than one hour time commitment. And if you teach multiple periods of US Government, as I do, I simply brief the other classes in detail afterwards as to how things went. In the alternative, you could videotape the Meet and Greet and then share it with your other periods.

2. Consider having your host ask the introductory questions appearing below:

Individuals who have participated in a Civic Learning Meet and Greet include:

A sampling of follow-up questions asked by students includes: