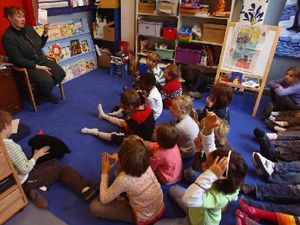 Many schools across the country just completed their last major break of the year, which means it is one mad dash to the finish line. It is a time when teachers and students alike begin to look forward to beach chairs, backyard bbqs, and hitting snooze on the alarm. As much promise as all this forward thinking holds, it can take one’s eye off the ball and wreak havoc on a classroom culture.

April, May and June can be the months when “things fall apart; the center cannot hold” in a classroom. All the work a teacher put in earlier in the year can come undone by spring fever, and with that, there is the ensuing frustration of trying to reach students that have their minds elsewhere.

Here are seven simple steps to maintain the culture of a classroom that was established earlier in the year.

Go Back to Routines -- Did you have your students write for 15 minutes every day in September? Did you have a Do Now on the board the entire first semester? Did every day end with each student cleaning his or her work station? The end of the year is the time we are most likely to let these reliable routines slide by the wayside. It is also the time when our students need them most. They need to reassuring predictability of a routine as a stabilizing force in a classroom. While unpredictability and spontaneity can be good things in small doses, too much of them can lead to disorder. It is time to go back to what worked earlier in the year.

A Priority on Preparation -- Just as it is easy to let slack out on classroom routines, the same is true of one’s level of preparation. Maybe you are scrambling at the copy machine to get handouts ready for tomorrow’s class instead of having everything ready a week in advance like you did earlier in the year. Maybe you are not planning your lessons as specifically as you once did. Putting things in apple-pie order can provide a sense of order and sanity as things become increasingly chaotic at the end of the year.

Enlist Your Students -- I looked at my book and supply closet the other day and saw the remnants of a tornado. Construction paper, sentence strips, and books had been upended and splayed in a chaotic mess. Of course, this storm didn’t strike in a flash like most tornados, it took the year to come together and slowly work its way through every dark corner of every shelf, but its damage remains nonetheless. Enlist your students’ help. This, and other classroom organization projects, are great ways to offer students extra credit and reintroduce some feng shui balance back to a room.

Communicate -- Get back on the horn or become a keyboard crusader by telling parents about the big picture. In September and October, the best you could offer was snapshots based on a month or two of school, but finally, with the end in sight, you can gush with pride as you congratulate parents on the progress made over an entire year.

New Roles -- Those students that are likely to become bored with the learning process and be a disruption to others can turn from enemies to allies. The end of the year is a great time to introduce new roles, giving students a new focus and a new responsibility. This invites them to be active participants in a positive classroom culture rather than detractors from it.

Coming Attractions -- A great way to keep students engaged and focused through the end of the year is to provide new challenges. Offer some snippets of the work they will encounter the following year -- new math problems, the more complex poems, or the new science concepts -- and see if they are capable. Not only does this show the learning continuum -- how the concepts learned this year will evolve next year -- it also presents a confidence-building opportunity that can make a difference when students are preparing for end-of-year exams.

Forget Fun Fridays -- While it is easy to give in to temptation and make Fridays carefree at the end of the year, it will become harder to maintain order Monday through Thursday. Soon students will ask for Terrific Thursdays and Wacky Wednesdays. Make Friday as meaningful as the rest of the week and your classrrom culture will remain intact.