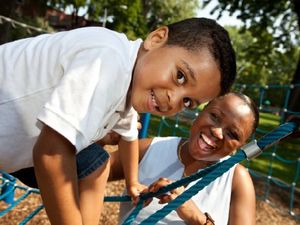 They tell you that having a baby changes everything -- or at least that's what the diaper ads say -- but no one prepared me for the ways my perspective on being a teacher would change after I had kids of my own.

You can't communicate too much

It doesn't matter if you're a teacher, a student, or a parent -- you can never know too much about what's going on. Sharing developmentaly appropriate information keeps everyone on the same page, and bad news is a lot easier to hear and digest if it comes from someone you can trust to be straight with you.

Remember: communication is at least 50% listening, and everyone deserves to be heard and understood, no matter how old they are.

My kids are big now -- literally and figuratively with my 13 year old hitting almost 6'2" -- but when they're sick or overwhelmed, I feel the same protective urges I felt when they were tiny.  I want their teachers to see who they really are and to recognize that they're still the most important things in my world, even when they're being obnoxious.

The benefit of being a teacher

Being a teacher also prepared me for parenthood in unexpected ways.  Particularly, that there's a lot to be gained from a carefully callibrated balance between cheerleading, nagging, and benevolent neglect.

It wasn't until after I had my kids that I realized how much my students need me to be their biggest fans, to say that I'm proud of them when they do good work, to push them to reach higher than they thought they could, and to get out of their way so that they can do it themselves.

What parent hasn't had to step back and let a three-year-old dress herself? The patience I learned from those long mornings watching her take HOURS to button up a shirt helped me wait when my students needed to figure things out for themselves.

I'm sure there are a lot of other things I haven't thought of here, but I'm a mom and a teacher and I have things to do. What would you add to the list?

Thanks to all of you who are like moms to the students we serve!