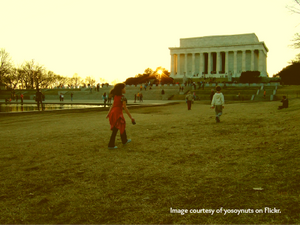 I am a San Marino High School (CA) social studies teacher who is best known for teaching the 12th grade US Government course (aka the civics course).

The math, science, drama, language arts, or special education teacher, for example? What about them? Ir the school secretary, counselor, or PTA parent?

At first glance, theirs seems to be a lost cause, though in fact there is much that they can do.

They can, for example:

The below describes the opportunities that I am familiar with. I’m sure there are others equally as good and I look forward to hearing from the Edutopia community about any/all that you might recommend.

CAP, according to the CRF website, “is a project-based civic learning opportunity designed to provide students with a chance to apply what they have learned to the real world and impact an issue that matters to them.”

Currently CAP is being implemented in over 700 high schools nationwide.

2. The YMCA’s Youth and Government Program

This program allows high school students to serve in model governments at the local, state, national, and international levels and currently operates in 38 states and Washington, DC.

The model government programs include the judicial, legislative and executive branches of government, guided by teachers, volunteers, or Youth Government staff.

This program allows eligible high school students to serve as poll workers on Election Day. Student poll workers learn firsthand how elections are run, and provide much needed support at polling place locations. They end their day with a better understanding of the importance of voting and the vital role poll workers play in making our elections run smoothly.

County elections officials may assign up to five high school students to serve as poll workers in each election precinct. Students work under the direct supervision of appointed adult poll workers.

To serve as a high school poll worker, a student must typically:

In addition to learning firsthand how elections are run, student poll workers can be paid a stipend that generally ranges between $65 and $150, depending on the county.

To encourage high school students in California to serve as poll workers, the California Secretary of State invites students, teachers, school activities directors and others to post, email or hand out the High School Poll Worker recruitment flyer.

Designed to encourage students to become active voters once they are old enough to cast a ballot, the MyVote Student Mock Election, headed by Secretary of State Debra Bowen and Superintendent of Public Instruction Tom Torlakson, invites high school and middle school students, teachers and principals to participate in the MyVote California Student Mock Election, which this year took place on Tuesday, October 28, 2014, just one week before California's November 4 General Election.

A mock trial is a pretend or imitation trial. It is similar to a moot court, but mock trials simulate lower-court trials, while moot court simulates appellate court hearings.

CRF’s Mock Trial Competition is a simulation of a criminal court case in which students portray each of the principals in the cast of courtroom characters (lawyers, witnesses, court clerks, bailiffs, etc).

To enter the mock trial competition, one need only

The first order of business - finding a coach - should prove relatively easy. History suggests that once a school shows in interest in entering the competition, one ore more local attorneys will step forward to coach.

On the other hand, having an attorney-coach is not required. I’m not an attorney and have coached the San Marino High School Mock Trial Team for years. We do well enough.

As for how one should go about obtaining a copy of the annual case packet, see: http://www.crf-usa.org/materials-catalog/mock-trials-cases.html

As for finding enough students to field a team, I suggest posting a flier in the school hallways. I also suggest starting with 12 students . . . one student each to serve in the role of

The SMHS Civic Learning Meet and Greet Program is a program designed to provide students with an opportunity to hear and learn from individuals appearing in either the textbook or the newspaper and who are connected to the subjects of government, law, history, politics, and education.

A typical “Meet and Greet” is designed to last no more that 50 minutes. It is formatted similar to that of a television talk show with the host, sometimes a student, sometimes the editor-in-chief of our town's local newspaper, and sometimes a teacher, opening the “Meet and Greet” by asking a number of introductory questions before giving the students a chance to ask questions of their own.

Model United Nations is an authentic simulation of the UN General Assembly, UN Security Council, or other multilateral body, which introduces students to the world of diplomacy, negotiation, and decision making.

At Model UN, students step into the shoes of ambassadors of countries that are members of the UN, from Argentina to Zimbabwe. The students, better known as “delegates”, debate current issues on the organization’s vast agenda. They prepare draft resolutions, plot strategy, negotiate with supporters and adversaries, resolve conflicts, and navigate the UN’s rules of procedure – all in the interest of resolving problems that affect the world.

Before playing out their ambassadorial roles in Model UN, students research the particular global problem to be addressed. The problems are drawn from today’s headlines. Model UN delegates learn how the international community acts on its concerns about peace and security, human rights, the environment, food and hunger, economic development, and globalization.

9. The Senior Project with a Civics Component

A senior project, aka a culminating project, is a project designed by a high school senior (or in some instances also a junior), which is completed at some point during the student’s senior year and which seeks to challenge the student to:

For more examples, check out these suggestions for a senior project with a civics component.

LegiSchool is a civic education collaboration between California State University, Sacramento, and the California State Legislature, and is administered by the Center for California Studies. Its mission is to engage young people in matters of public policy and state government by creating opportunities for students and state leaders to meet and share ideas on the problems affecting Californians.

Organized by the Judicial Council and Administrative Office of the California Courts, in partnership with the Constitutional Rights Foundation and the California State PTA, the National 1st Amendment Cartoon contest seeks to increase student understanding of the Bill of Rights and the United States Constitution, as well as to help educate youth about the role of the judicial branch and their role as future jurors.

Criteria for judging are based on students’ understanding of the First Amendment, creativity, and artistic merit.

ICivics is a web-based education project that offers an array of free interactive, high quality civic learning games and activities for students.

iCivics was founded by retired United States Supreme Court Associate Justice Sandra Day O'Connor. Justice O'Connor started the web-based education project because she was concerned that students' failing grades on civics examinations were due to inadequate information and tools required for civic participation, and that civics teachers needed better materials and support.

Do I Have a Right?

In Do I Have A Right?, the player controls firm of lawyers who specialize in constitutional law. The player must decide whether potential clients have a right guaranteed by the U.S. Constitution, and if so, match them with the right lawyer. The more clients served, the faster the law firm grows.

Argument Wars is a simulation of a courtroom argument. Players test their persuasive abilities by arguing real Supreme Court cases, and must convince a judge that the law is on their side.

In Supreme Decision, the player is a Supreme Court law clerk to a fictional Justice who grabs you on her way to an oral argument in a case involving a student's right to wear a banned band t-shirt. The Court is split 4-4. The game divides the First Amendment case into four issues that are explained through the other eight Justices' conversations. The player puts together the legal analysis needed to decide the case.

13. We the People: The Citizen and the Constitution Competition

At this annual competition, students are given an opportunity to simulate a congressional hearing.

The judges at the competition are history, political science,law, and education professors, members of the legal community, and others with a knowledge of the Constitution and Bill of Rights.

In preparation for the competition, entire classes of students learn about government and study the Constitution and Bill of Rights. The needed curricular materials have been developed by the Center for Civic Education.

WHAT IS CIVIC LEARNING?

Civic learning is anything which provides students with the knowledge, skills and values they need to be informed and engaged participants in our democracy.

Research proves the efficacy of the Six Proven Practices in civic learning: