The kids in the San Francisco Bay Area's poor West Oakland community may have needed multimedia access. They just weren't sure they needed it in a haunted house. 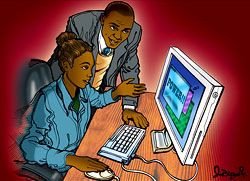 As cofounder and executive director of Digital Underground Storytelling for Youth (DUSTY), an after-school program that teaches multimedia literacy to low-income students ages 6-13, and sometimes young adults and adults, Michaelangelo James got a quick education in the pragmatics of bridging the digital divide. When he started DUSTY seven years ago, his first challenge was just getting the kids to enter the building, let alone stick around to experiment with technology.

It turned out the multimedia lab had been set up in an abandoned Catholic convent. St. Joseph's Convent stands out from the other West Oakland Victorians; it is a large and imposing Italianate-style building, set back from the street, with a large statue of St. Joseph looming from the upstairs balcony. Neighborhood children were convinced the building was haunted by the nuns who used to live there.

They've come a long way. The kids not only learned to brave the building, they began doing incredible things inside. Mentors teach the students basic multimedia skills and encourage them to create their own "digital stories," which involves integrating traditional reading and writing practices with the latest multimedia technology. What they end up with is content all their own.

What's more, their mentoring happens one-on-one, and they receive additional homework assistance in a safe and creative environment. Most attend from nine to twelve hours a week, during which they write, produce beats, record music, dance, and perform. Recently, the organization began planning a move to a new location, and it is also considering creating a mobile team, which will take the project directly to high schools.

An Oakland native, James studied environmental policy at the University of California at Davis, worked on a slew of independent films, performed stand-up comedy, and now lives with his family in West Oakland. Through his work with DUSTY, he has helped more than a thousand students gain multimedia experience. In 2007, DUSTY's Glynda Hull, a University of California at Berkeley professor, was awarded the school's Individual Civic Engagement Award for her role in establishing the organization, and DUSTY won Oakland's 2006 Oaklandish Innovators Award.

James says he's come to understand that the digital divide can just as often involve nontechnological issues -- say, a scary building -- as the more obvious issues, such as access to computers. He met with Edutopia in his office, a space typical of community activists, with assorted papers, boxes, and unfinished projects covering every surface.

How did DUSTY get started?

I was approached by a professor at UC Berkeley about working with the education department on a digital-storytelling project involving kids. I had been working in film and documentaries here in Oakland and in Los Angeles, and I thought this was a great opportunity to share this medium with kids. And there was the promise of bridging the digital divide. With Silicon Valley and the university so close, we'd be bringing all these resources together.

Initially, we were going to be working on a single study, but I told the professor that I wasn't interested unless there was a way to keep it going and to make it free. This is a really underserved community here in West Oakland, and if we're talking about the digital divide, most people don't have access.

How do you define "digital divide"?

The divide, as I see it, is basically about the haves and have-nots, but it gets more complex. At first it was about access to computers and technology and software, but then it became about access to the Internet. When we first moved to West Oakland in 2000, we couldn't even get Internet access here, because there weren't enough subscribers in the area. So there was a huge divide there. Today it's available, but back then it took us about a year just to get online.

It's interesting to talk about the divide, but there are so many other things we encountered that had to be solved before we could begin to get kids learning. We had to ask ourselves what these students needed in order for us to provide this training and this access. What we found is that they needed a place to go after school, and homework assistance, and they needed food -- at least a snack -- because there are always nutrition issues in underserved communities that no one's addressing.

There are a lot of things. That's where the complexity of the divide comes in. It's one thing to have a computer and online access so that anyone can go to the lab and use the equipment. But it's a different thing to provide instruction on how to use it, and that's what's really necessary. So even though you may have the technology, you still need to provide this basic infrastructure in order for your students to learn.

In underserved communities, such as East and West Oakland, there is this desperation for after-school child care. I've had grandparents who are raising kids who just want their grandkids in a safe place after school and to have good experiences. And you look at the complexities of that -- here's a grandmother who has to raise her grandchild and is dealing with so much stuff outside of just trying to get this person to learn something on the computer.

You made the point that "simply having technology is not enough; rather, to improve student academic outcomes, technology must be meaningfully used." So spending time surfing the Internet isn't enough?

After six years, with more computers around and more access for kids, the problem has become that kids now have access, but few of them are gaining real skills. The Internet is driven by consumerism instead of knowledge, so kids are gaining the skills not to be producers and creators, but to be consumers. Learning basic applications such as PowerPoint can be a really useful tool.

Working in the schools has been really enlightening. There was a group of students that we worked with -- almost a control group -- and another group working with a teacher from the school. All of these students had English as a second language, and they were making presentations using PowerPoint. What was really interesting was that when they were presenting their work, the other group of kids really struggled with their language issues, but the kids that worked with our program had a level of confidence because they had control of the technology. Feeling empowered in the area of technology, in other words, carried over into a more general comfort in communicating in English.

The other kids didn't control the technology. They didn't manipulate anything. Instead, their teachers helped them all the way through -- "This is how you do this" -- and so they didn't really use the application. They just provided the written narrative. The students in our group, who did all their own work, still took pride in their technological abilities, even when they got stuck with a language issue.

So even if they had language-comprehension problems, these kids could still feel good about what they accomplished technically.

The more a student can control what they're doing and see the effects, the more empowered that kid is going to feel. I remember early on, even those families that could afford to buy a computer wouldn't let their kids touch it. They finally have a computer, but it's too valuable to risk messing up.

If you look at people such as Steve Jobs and Bill Gates, they get in the computer and tear the whole thing apart and put it back together. You can do all these other amazing applications when you understand the computer that way. That's where I think there is a sense of empowerment -- when you are able to do all those things. As an artist, you need to get your hands in there. A lot of the strength in bridging the digital divide is getting them to understand and really manipulate the technology.

Is that happening in your program?

Yeah, that's what I'm all about. I have to teach my instructors again and again because they feel like they're not being effective if the kids are doing all the work. But I tell them, "No, you are, you really are!"

How does working with DUSTY affect kids at school?

We had a girl who had to do a book report on a famous person, but her teachers at school couldn't get her to write about anyone. She didn't want to do it. But she came to DUSTY, and we showed her some things. She put together this nice dedication to Aaliyah, the singer who died in a plane accident, and she used all this digital composition and put her voice over it, and we helped her with the story and told her to put herself in there. It was great.

When her teacher saw it, he was totally surprised by what she had done. He had been trying to get her to do something like this, but on paper. He said that he didn't know that she had it in her, and it made me think how important it is to have these kinds of centers, for kids to be something different outside of school, because you get labeled in school as a certain type of student. When you can get out of that and get a chance to be seen as something different, that's important.

Again, you are helping to build up these kids' self-esteem.Right. Recently, we partnered with Oaklandish, a local community-arts organization, and they provided us with their projector and screen. Now we can go out in any neighborhood and screen these kids' movies.

What's the response been?

They are so surprised to see their work on a big, big screen instead of a computer screen. It's like, "Oh, my God! I did that!" It's nice to bring in the community to support them, to say, "Great job." And that encouragement is what's needed.

It's funny -- the encouragement from the community is probably more important thing than anything else. It's huge. For them to be honored and respected for their work is huge.

Is that enough, to help a kid feel empowered and respected?

We have to start thinking bigger than we have been in terms of this divide. We need to introduce a professional-development component into these programs and build up the students' job-based skills.

All of a sudden, you've exposed them to this great technology, but what skills do they actually have now? How can we as a community technology center support that student into the future?

What's next for DUSTY?

We're going global: If kids are able to think critically, express themselves critically, and understand what's going on critically, then they can use this technology to communicate back and forth with other countries. The next thing is to be aware of issues that are going on -- say, in Iraq with the war, or in Africa with starvation and AIDS -- and have real discussions about them. That way, we won't drop any bombs on anyone, because now they are our friends.

Then we need to move away from the computer and get up and out into the world and visit these places. Because even though the world is smaller because of technology, it still needs to be tangible. We still need to see what it's like over there -- to see it and smell it and then stay in touch via technology. Then we can come back home and write a song or a story about it.