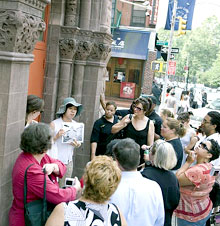 Jacalyn Moss is lead teacher at the Alternative Learning Institute, a public school that operates in Orleans Parish Prison. She and her colleague Kathleen Acosta attended the workshop A City of Neighborhoods -- a five-day design-education workshop at the New York City's Cooper-Hewitt National Design Museum.

The event assembled community planners, civic leaders, environmentalists, architects, museum curators, and educators, who covered topics such as the purpose and importance of design and how it permeates the way we think and live. Moss and Acosta brought what they learned and their enthusiasm back to the sixty students who occupy the women's section of the Alternative Learning Institute in the New Orleans prison. Inspired, the students transformed their school's environment.

Located just a few blocks from the Superdome, the prison was flooded as a result of Hurricane Katrina, and the prisoners had to be evacuated by boat. The Institute didn't reopen for classes until January 2006.

"We had to start from scratch," says Moss, explaining that classes were initially held in makeshift locations, such as empty offices and dining rooms. "Getting this design training was perfect timing for us."

At the Cooper-Hewitt workshop, Moss heard Alberto Romero, a past participant of A City of Neighborhoods, talk about how his students at Philadelphia Constitution High School created rubrics to evaluate neighborhood murals.

"A light went on," says Moss. "I realized we could apply these design concepts. We could create an atmosphere so it would feel like a preschool. In the recreational yard, we could paint a park scene. We could try to create a space where the inmates who are mothers would want to take their children."

In August 2007, a few months after Moss returned from New York City, her students began transforming their storm-damaged classroom -- a huge 40-foot-by-80-foot room with 15-foot-high walls painted an institutional blue. Today, says Moss, that formerly drab space seems "like a child's fantasy." Three of the four walls consist of floor-to-ceiling murals based on whimsical themes from children's books.

"It's unbelievable," says Moss. "When you walk in, you look straight ahead and see a picture of three huge trees, children playing, a zebra reading, mice picnicking -- a place where the kids know their mothers are safe."

The inmates also built and painted a large screen with the phrase "Leaping into Literacy" to serve as a backdrop for videotaped storytelling sessions. (The DVDs of mothers reading aloud are sent home to the children.) And the transformation didn't end there. The students are conferring with Longue Vue House & Gardens, a Cooper-Hewitt partner, to come up with ways of extending this child-friendly theme into the adjacent recreational yard.

Evantheia Schibsted is a contributing writer for Edutopia.