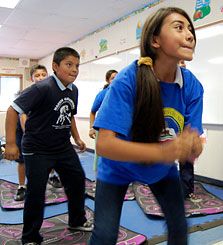 It's 10:30 A.M. on a Tuesday, and a dozen ten-year-olds are jumping up and down, arms flailing in the air, in a classroom at Los Angeles's Marvin Avenue Elementary School. They've been at it for a half hour now and have yet to exhaust their energy, although a few are audibly gasping for breath over the dance music that's driving their activity.

It may sound like all hell has broken loose, but these fifth graders are neatly lined up in rows, their eyes glued to a television screen, trying as best they can to follow the game. They're playing Dance Dance Revolution (DDR), a video game that's helping schools nationwide revive student interest in gym class.

Unlike many video games, which critics often bash for turning kids into couch potatoes, DDR demands physical activity. Students must mimic with their own bodies the choreographed dance moves they see on screen. An electronic pad that's hooked up to a game console, such as the Sony PlayStation, records each step. The closer students come to the original patterns and beats, the higher their scores. The result is a fast-paced workout that requires concentration, builds coordination, and engages students in a way many traditional sports don't. Hundreds of teachers have already incorporated the game into their PE curricula, and one observer estimates that more than 1,500 schools in the United States will be using DDR by 2010. (Educators are also deploying the newer Nintendo Wii, but the proliferation of this console and its games has yet to reach DDR's proportions.)

Teacher Helge Ziazie, who acquired the game and equipment for Marvin Avenue, says she's amazed by how much the DDR system has transformed her students' attitudes toward exercise. "Every morning, before I open the gym at school, there are at least fifty to sixty children already lined up," she adds. "They say to me, 'We want to work out!'

"They can forget all of their troubles when they are dancing and having fun," Ziazie explains. "It's really an all-around program, because they have different levels, which is great, because nobody feels intimidated. There's no teasing with this game. They all just want to play."

Ziazie purchased the DDR system, a flat-screen television, free weights, an outdoor climbing wall, and stationary bicycles that connect to a PlayStation console (so kids can ride on a virtual track) with a $100,000 state grant from the Governor's Challenge fitness program. Her essays on the importance of teaching children about exercise from a young age won one of three grand prizes.

Ziazie wrote about how the majority of her school's students come from low-income families, with parents who work two or three jobs and thus have little time for extracurricular activities with their kids. If students at her school were going to exercise, she argued, it would have to be at school. But like most elementary schools in California, Marvin Avenue didn't have a gym; students just played traditional sports such as handball and basketball in the schoolyard.

Tony Hawk, a pro skateboarder and a video game icon who serves on California's Governor's Council on Physical Fitness and Sports, agrees with Ziazie that getting kids active at a young age makes all the difference. "Obesity is the number-one cause of cancer in children," Hawk says. "It is important to get kids into the habit of being active so they continue that tradition into their adult life. We need more healthy activities for kids, and video games are a great catalyst."

To accommodate the new equipment, the school emptied out a bungalow on campus, which has officially become its exercise room. Ziazie says students never really thought about working out before, but now they come to school early and stay late to do so. In addition to teaching with DDR in regular classes, Ziazie opens the gym during the free periods before and after school. Ten-year-old Angel is always among the first in line. "It's helped me get into better shape," he says. "When I do it in the morning, it gives me more energy during the day. Before, I was so tired by recess, but now it's different."

In an era when children are less engaged than ever in physical activities, such as walking to school or playing outdoors, and are more prone to using computers or watching television, games like DDR that merge the two usually diametrically opposed pursuits may be key in fighting childhood obesity. A recent study of 1,400 children ages 8-10, published by the Journal of the American Dietetic Association, showed that 44 percent consumed fewer calories than what experts say they need to grow, yet the kids were still overweight, in part, because they led sedentary lifestyles.

Extra weight may further deter children who aren't natural athletes from participating in sports, making PE class a dreadful event for some. Ziazie says she has heard students taunt one another during traditional activities, such as running competitions, in which someone always loses or comes in last. By contrast, each student playing DDR has a personal dance mat and competes at his or her own pace against the animated characters on screen, not the other students. This allows kids to participate in a group activity while exercising at an appropriate pace.

"Sometimes, if a kid is really small or even too big, regular outdoor sports might be hard for him or her," says famed fitness expert Jack LaLanne, another member of the Governor's Council on Physical Fitness and Sports. "As for video games, if kids will exercise to them, great!"

Skeptics argue that children should exercise outdoors, not attached to a video game console. But Gwen Pryor, head of the PE department at Tommie Kunst Junior High School, in Santa Maria, California, disagrees. Pryor says her school has used DDR effectively for nearly a year. "Not everyone has the same skill levels, and with something like Dance Dance Revolution, it lets students self-select and take ownership of their own workout, which isn't true of many outdoor activities. They're completely engaged and having fun, and it gets their heart rates spiking just as well as anything they would do outdoors."

The game also gets results. Patrick Henry Middle School, in Granada Hills, California, has used DDR in its PE classes for more than seven years now. The school initially tracked students' progress, and it found that during the first three years the game was offered, some students lost 30 to 40 pounds over the course of a school year from playing DDR. Teachers say they have also seen an improvement in students' strength and cardiovascular health. "My own son used to have difficulty getting through a whole soccer game," says Lori Mac Donald, a PE instructor at Patrick Henry. "He started playing DDR after school, and within a few weeks, he was able to finish a soccer game without being completely out of breath."

The beauty of DDR is that students don't think of it as work. "It's just fun," says Janeth, a Marvin Avenue student. "Sometimes, learning a new dance is difficult, so I just concentrate really hard, and when I finally learn it, it makes me so happy. It's my favorite thing to do of all the PE stuff." Judging from the determined looks on the faces of Janeth and her classmates as they danced through level after level of the game, they all seem to share the sentiment.

To date, California schools have found several sources of funding for the DDR setups, which cost $500-$700. Marvin Avenue used its teacher's winnings from the Governor's Challenge. Patrick Henry paid for its consoles with a portion of Proposition K grant money secured by the Los Angeles Unified School District. Gwen Pryor, head of the PE department at Tommie Kunst, received funds for DDR consoles through a state physical education arts grant awarded to her school district.

On the federal level, school districts and other local education agencies, and community-based organizations such as the YMCA, can apply for grants through the U.S. Department of Education's Carol M. White Physical Education Program, which provides awards of up to $500,000 to dozens of recipients every year.

Clare Kleinedler is a freelance writer in Los Angeles.