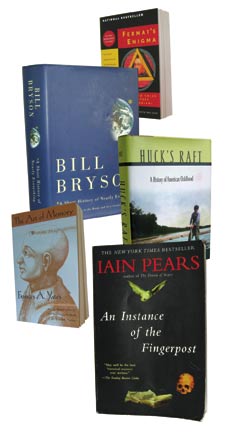 Part of making public education better is bettering yourself. If you can improve your relationships with colleagues in the process (there's precious little time for that during the day), so much the better. Organize a handful of other teachers and administrators into a book group that meets once a month. The catch: No fair talking about work, and reading books about work is off limits. Below, five fun-but-good-for-you books to get you started.

Simon Singh
Anchor Books / 1998 / 307 pages
A book on a mathematician obsessed with proving a centuries-old theorem doesn't suggest your typical rollicking good read, but even if the math outdoes you (it will, and you can skip over it), the gossipy stories of the private lives of mathematicians balance out the equation.

A Short History of Nearly Everything

Bill Bryson
Broadway Books / 2004 / 560 pages
Bryson is justly famous for his lucid, engaging prose on the most mundane of subjects (like the exact and specific way the English argue about driving directions). Here, he takes on weightier topics, like how the whole world and the entire universe, you know, work, with similar flair. From how to really think about atoms -- just remember, protons give the atom its identity; electrons give it personality -- to a paean to seafloor spreading, Bryson's treatise on the how and why of the natural world is a wonderful summary.

The Art of Memory

Frances A. Yates
University Of Chicago Press / 2001 (reprint) / 464 pages
A dense but gorgeous book on the lost art of memory and the techniques people used to remember things before books, paper, literacy, and the search engine. Try committing a speech to memory by linking it to the rooms in an imaginary mansion, like the ancients did. Or just let us know where we put our car keys.

Steven Mintz
Belknap Press / 2004 / 464 pages
In a youth-obsessed culture, it's surprising that we spend so little time examining the framework and evolution of childhood. That's been set right with Huck's Raft, which, like the adventure to which the title alludes, looks at the mystical journey between that moment we arrive kicking and mewling into the word to that terrifying epiphany when we realize we're adults. Mintz strips away the myth to show how the role and perception of young people has evolved in the United States during the past three centuries, from the sinful creatures of our puritanical days to young laborers, lovely cherubs, and finally the overscheduled mini-adults of today. By examining where we come from, Mintz gives us a brief idea of where we may be heading.

An Instance of the Fingerpost

Iain Pears
Berkley Publishing Group 1999 / 752 pages
It's all a little bit of history repeating. Repeating four times, to be exact, in this murder mystery set in seventeenth-century Oxford. A quartet of narrators recount their version of the events enshrouding a murder (maybe) and an execution (or was it a murder?). You'll never trust an eyewitness account again.