Over lunch at a Chinatown restaurant in Manhattan, Michelle Biagas, principal of New Orleans's Priestly School of Architecture and Construction, spoke enthusiastically about her charter school's mission. "We're about the business of exposing our kids to everything that will give them opportunities to be a success -- and that means academics, the labor force, and entrepreneurship," said Biagas. "Exposure is the key to everything."

Joining Biagas at the large round table were four Priestly teachers. Judging from the exchange of knowing glances as she spoke, it was obvious Biagas's colleagues shared her vision for the ninth- and tenth-grade students at the two-year-old school. (Priestly has since added an eleventh-grade class for the 2008-09 school year, bringing the number of students to 300.)

"Architecture is a springboard for our students," she said. "Architecture is design, and in every aspect of our life we have design, because design is planning -- from deciding what you're going to wear to scheduling your day."

Biagas and thirty-nine other New Orleans educators were in New York City to participate in A City of Neighborhoods, a five-day design-education workshop given by the Smithsonian Institution's Cooper-Hewitt National Design Museum. 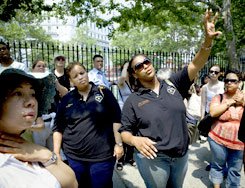 The event brought together community planners, civic leaders, environmentalists, architects, museum curators, and educators, who covered topics ranging from the purpose and importance of design to how it permeates the way we think and live. Through talks, discussions, and hands-on workshops, these experts offered practical tips to the New Orleans educators for incorporating design into their lesson plans and curricula and instilling in students the skills and understanding of how they can shape their neighborhoods and world -- especially important in the destructive wake of the floods that ruined so much of their city.

Typically, A City of Neighborhoods participants consist of public K-12 teachers from across the country. But for this workshop, Cooper-Hewitt chose to focus exclusively on teachers, school counselors, and principals from the Big Easy (a name now more ironic than apt). Caroline Payson, the museum's director of education, realized the need for this focus after talking with educators when she was in post-Katrina New Orleans for a conference in early 2007.

"They understood why design was important not only to help them cope with what was happening but also to give them a leg up," recalls Payson. "People make design decisions every day, and these decisions are crucial to the future of the city. Kids in New Orleans need to understand this, because they will be rebuilding the city for the rest of their lives."

Payson also foresaw how it might boost the teachers' morale. "Coming to New York was a way to help the teachers heal and dream about the future as well," she says. "They wanted to walk down a street where the buildings weren't falling down. It was very important for them at a time when they were holding it together for their students, yet their lives were as devastated as the kids'."

Beverly Cook, a fine arts teacher at Eleanor McMain Secondary School, in New Orleans, found comfort in the camaraderie of sharing Katrina-related experiences with fellow teachers. She benefited on a professional level as well, particularly after taking the tour of Chinatown, an aspect of the program that involved hands-on exercises for exploring the neighborhood's past and present as well as coming up with design ideas for its future. "I became much more aware of ghost paintings on walls and buildings," says Cook. "Now I look at my own surroundings in a different way."

Credit: Klaus Schoenwiese
From the Wreckage: Survivors of Hurricane Katrina took an emotional tour of Ground Zero in lower Manhattan. 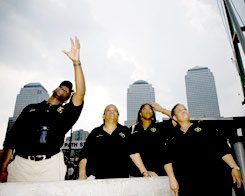 Credit: Klaus Schoenwiese
From the Wreckage: Survivors of Hurricane Katrina took an emotional tour of Ground Zero in lower Manhattan.

As a result, Cook created a lesson in which students plan and lead a tour of neighborhoods throughout New Orleans. The essential point of this project-learning exercise is for students whose lives and surroundings have been so severely disrupted to learn the history and architectural growth of the city and how it reflects cultural and political influences. "They were each assigned a neighborhood to research," Cook says. "They wrote and memorized scripts and were handed a microphone. Each child became a tour guide."

Speakers at the Cooper-Hewitt program recommended bringing industry professionals and students together, encouraging them to study existing urban designs. This was precisely what Michelle Biagas did early in 2007, when a group of sixty architects from the Dallas-based firm Perkins + Will came to New Orleans and worked with Priestly students to create a plan for the site of their future school. They collaborated on everything, from taking measurements at the location to planning how to completely refurbish the building to figuring out how to make the building green.

Biagas points out that the ongoing support of Cooper-Hewitt and its network of design professionals has proved invaluable. "A City of Neighborhoods was the single best development my team experienced," she says. "They've embraced us and said 'OK, we're going to help you succeed.' They're both a great support system and a great teaching resource."

Kim Robledo-Diga, Cooper-Hewitt's school-programs manager, who makes regular trips to New Orleans to follow up with participants, notes their progress, and says she has been impressed at how energetically they have "jumped on what they learned."

Robledo-Diga cites Jacalyn Moss, lead teacher at the Alternative Learning Institute, a public school within Orleans Parish Prison, located in downtown New Orleans. As a result of design tips that Moss passed on to her students, they transformed their drab, storm-damaged classroom into a bright, inviting space.

On May 6, 2008, A City of Neighborhoods participants reunited on their home turf for a design fair organized by Cooper-Hewitt and held at the Jackson Brewery, in the French Quarter. At the event, students showcased their design projects alongside New Orleans designers. Events such as this are expected to continue for several years as New Orleans rebuilds, neighborhood by neighborhood.

As part of their New York experience, some participants of the June workshop went to the site of the World Trade Center attacks. As survivors of our nation's greatest natural disaster, they immediately grasped the impact of the country's most devastating terrorist act. For Biagas and others, Ground Zero served as a reality check about the work she and her fellow New Orleanians face. "It was a sobering experience," recalls Biagas. "Six years later, the area still has not been rebuilt. I realized it's going to take at least six years or maybe ten or more for our community to come back." But it will come back, brick by brick. And that work has already begun.

Evantheia Schibsted is a contributing writer for Edutopia.