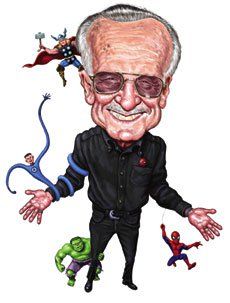 I had a teacher when I was about ten years old whom I've never forgotten. I have the worst memory in the world, but I can still remember his name: Leon B. Ginsberg. He was young, in his twenties.

I don't remember what subject he taught, but he began every class by telling us a brief baseball story, which he would improvise, about a slugger named Swat Mulligan. His stories were funny and exciting, just like his own teaching personality. He seemed to make a game out of everything, and he made us feel that learning could be -- and should be -- fun.

By keeping his students entertained and in a good mood throughout the class, he was the only teacher I ever had who made us look forward to each session. Mr. Ginsberg taught me a really great lesson, and it's one I've tried to follow all my life: Whenever I want to communicate to others, I always try to do it in a lighter-hearted way and make it as entertaining as possible.

It doesn't matter what the subject is. During Word War II, I rewrote dull army payroll manuals to make them simpler. I established a character called Fiscal Freddy who was trying to get paid. I made a game out of it. I had a few little gags. We were able to shorten the training period of payroll officers by more than 50 percent. I think I won the war single-handedly.

Since the earliest days, comics have been on the very bottom of our cultural totem pole. So many parents and teachers have believed erroneously that if a youngster reads illustrated stories, he or she won't be able to cope with books that consist only of words.

Those people claim that comics stifle the reader's imagination because the reader can actually see the characters and the scenes instead of having to imagine them. I've always contended that that is a total fallacy. If that were true, then no one should attend one of Shakespeare's plays, because that would stifle the audience's imagination; the plays should only be read. It is obvious how nonsensical that theory is.

During the years I was at Marvel Comics, I received hundreds and hundreds of letters from parents and teachers. They all said basically the same thing: "I despaired of ever making a reader out of little Johnny. I just couldn't get him to open a book. He was getting failing grades in English, in grammar and composition, and then, one day, he began to read comic books, and he really got hooked on them. In a short time, he became an avid comic book reader. Now, it is hard for me to understand, but his grades in English and composition have improved tremendously. He's even started reading other things."

But there are always critics. In one of my public debates with comic-industry foe Dr. Frederic Wertham, one of the funny things that he used to say was that he had done a very scientific study revealing that 90 percent or more of all the kids in reform school had read comics. So I said to him that 100 percent of kids in reform school drank milk. It went over really big with the audience.

Comic books serve a great function in this one area: They make a young person equate reading with pleasure. Kids enjoy reading comic books. Once they can equate reading with something they are enjoying, then reading is no longer a chore, but, rather, a fun thing to do. Nobody reads just comics; eventually, you read everything.

Stan Lee created (or co-created) the Fantastic Four, the Amazing Spider-Man, the Incredible Hulk, Mighty Thor, the Uncanny X-Men, and many other comic book cultural icons. Today, as chairman of POW! Entertainment, he's bringing new heroes to movies, TV, DVD, and even your cell phone.