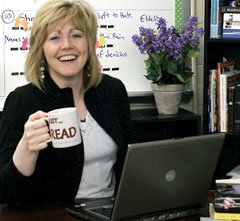 Giving instruction for a new-millennium makeover is an uphill battle for national organizations, let alone for solitary educators in the trenches. But Lisa Huff, a pioneering English teacher at Batesville High School, in Batesville, Arkansas, is doing just that: She's heading a movement to transform teaching and learning at her school one eager -- and sometimes apprehensive -- colleague at a time.

"We can't keep doing what we've always done," insists Huff. The fifteen-year veteran taught traditionally until four years ago, when her online master's degree in curriculum and instructional technology through Grand Canyon University revolutionized her teaching. Now she's intent on emphasizing project learning, creativity, problem-solving skills, and technology -- from blogs to wikis to RSS feeds -- to engage and connect her students.

Although the Batesville School District is a member of the Arkansas 21C Network (an offshoot of Yale University's School of the 21st Century initiative), Huff maintains that her school still lacks the support and resources needed to move the instructional revolution from talk to action. High test scores and a high-caliber staff notwithstanding, she says, "I want us to be better."

Thus resolved, she marched into her principal's office last school year and made her case: For any real transformation to take place, she said, teachers need a "twenty-first-century learning community." For Huff, this means a small group of committed individuals working together to become comfortable with new technologies and new practices. She believes a peer-coaching model is the only way to nurture the metamorphosis necessary for classrooms, principals, and school boards.

She asked to start small, with just one teacher from each academic department. She'd help bring them up to speed on new technologies, expanding to tech-integrated and project-learning lesson planning. If new teams were added each year, she argued, within five years everyone on staff would have gone through this coaching.

Principal David Campbell found his initial conversation with Huff exciting, "but when you're an administrator," he says, "you have to look at both sides of the coin." Would this be a worthwhile endeavor, given everyone's limited time and the school's limited budget? Echoing the sentiment of many in his field, he admits, "I grew up without a lot of technology, and I'm resistant to change."

But Huff's enthusiasm led Campbell to agree to a trial run. Huff recruited four instructors as well as Campbell and the Batesville school board president, Paul Hance. Participating teachers can allot a portion of their required professional-development hours to this initiative -- a small but significant first step.

Called the 21clc, the group held two full-day training meetings during the summer and now meets monthly throughout the school year. In between, it maintains a group wiki and personal blogs using EduBlogs as a host. Group members have compiled iGoogle pages and use Google Reader to subscribe to each other's and other educators' blogs, as well as gather new content from around the Web. They are also planning a blog-based book club, beginning with Grant Wiggins's acclaimed book Understanding by Design.

"We've created a real network here," says Huff -- a network that's designed to help participants battle what she sees as the biggest hurdle between educators and technology: fear.

"When Lisa asked if I wanted to do this, a large part of me was terrified," concedes Hance. Fortunately, he says, "it's been much easier to grasp than I thought it would be. Months ago, I would have had a difficult time finding a blog page, let alone putting a blog together."

Still, when it comes to reform, this is a drop in the bucket. "I'm just an English teacher," says Huff. "I have a full class load." To scale the idea and improve instruction districtwide, teachers need the support of technology coaches who have more time than she does, she adds.

Huff hopes the success of the fledgling 21clc group will bolster the movement so that the necessary funding and staffing will eventually follow. The good news so far is that her colleagues are beginning to share her vision.