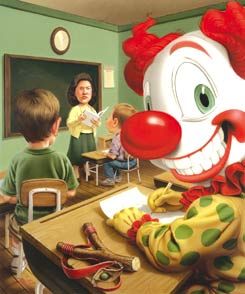 The class is sailing along like a tight sloop on a fresh sea. You're clicking off those lesson-plan points, rat-tat-tat, and the sublime light of understanding glows from nearly every face in the room. Teaching, you think, is a thing of rare beauty -- until disaster strikes in a distressingly familiar form.

Maybe it's a whispered one-liner that cracks up the back row, or a wad of paper bouncing off an unsuspecting forehead. It could be the firecracker pop of a "dropped" book or a sotto voce put-down that elicits giggles from all quarters. Whatever it is, it's inappropriate, disruptive, and infuriating. And it's probably funny as hell.

You've just been upstaged by the class clown.

How to Humor Class Clowns

Bane of teachers from time immemorial, this irrepressible cutup no doubt sat at the feet of Socrates in the agora -- and no doubt drove the philosopher to hemlock. Immature, gregarious, and prepared "to do or say anything to stay in the spotlight," according to You Can Handle Them All, an online teachers' reference for dealing with "misbehaviors," the class clown lurks wherever pedagogy is plied. And wherever a pint-size comedian riffs for his peers, there is usually a long-suffering teacher attempting to keep him (or her) from disrupting the class.

One of the keys to accomplishing this, many professionals now advise, is to resist the impulse to squelch the clownish behavior. Instead, they say, go with your gut: laugh. Given the most common underlying factors for in-class funny business, a good guffaw is possibly the best first step to reaching an understanding with the clown. Acting out may be the only way this kid can garner peer acceptance. Or, goofing off may cover up social insecurities or academic shortcomings. Frequently, too, a troubled home life gives impetus to the clown's antics.

"The biggest issue is a sense of self," says Dr. Rama Pemmaraju Rao, a former assistant clinical professor of child, adolescent, and adult psychiatric medicine at the University of Alabama Medical School who is now in private and public practice in Asheville, North Carolina. "Kids are always evaluating themselves through others' eyes, looking for positive feedback, and if they don't get it, they compensate. If they have a talent for humor, that's when they appoint themselves the entertainment committee."

By overreacting to the clown, the teacher simply plays into his or her game. Ignoring the problem brings disorder to the classroom. So, what to do? This is a situation where a good sense of humor -- essential for a career in education -- comes in handy.

"The first response to a funny remark by a class clown is to be honest and laugh," says Howard Seeman, professor emeritus at the City University of New York's Lehman College and author of Preventing Classroom Discipline Problems. "If you don't, you look like a phony in front of your kids, and that makes you vulnerable to the clown's desire to remove your mask."

Of course, it's pretty hard to laugh when you've got a long chapter to cover before the bell rings and your clown is on a roll. Making things worse is the fact that the student in question often bounces off the walls as part of the act, the sign of a learning disorder or attention issue associated with hyperactivity. Still, as Rao cautions, even the presence of a clinical condition shouldn't cause a teacher to discount the fact that the child may be genuinely gifted.

"What makes it hard for the teacher is the clown's lack of impulse control, which causes disruptions," says Rao. "Sure, if the kid is jumping up on his desk to do his Jay Leno routine, that's inappropriate. You have to try to filter through that behavior and tap into the talent -- maybe channel it into a drama show or some other after-school activity."

But, as every teacher knows, there are times when even such an enlightened approach isn't enough to make the clown manageable. When the inappropriate behavior persists, savvy educators have learned to look at a student's domestic situation for clues, and respond with care.

"With a class clown, you almost always find something deeper going on, and our job is to figure out what's pushing them that way," says Margie Schwartz, counselor at Marin Country Day School, a K-8 private school in Corte Madera, California.

"Often, it's anxiety and stress coming from the home," Schwartz adds. "In alcoholic families, for instance, kids take on different roles -- be it the scapegoat, caretaker, or clown -- and if they are being validated in that role, then they bring it to school, where they suck up all the energy in the class and deprive others of quality learning time."

It's at this point, says Rao, that a teacher must take on the role of gatekeeper, guiding the student to counseling or therapy. "The wiring of these kids is very sensitive, and when there's dysfunction in the family, they internalize it and often blame themselves," he adds. "So they try to compensate in the healthiest way they know, through creative humor. Since it's often beyond the teacher's wherewithal to encourage them while maintaining the class, therapy becomes the best route."

Because class clowns are so often grouped in the bright-but challenging category, the question of what life holds for them is especially intriguing. Will they be able to trade on their exhibitionistic talents to succeed as adults, or does their innate disruptiveness condemn them to a troubled existence?

Seeman, who runs a Web site called Classroom Management Online, is sanguine about the prospects of schoolroom jokesters. "Often, the clown's talent is a transferable skill to legitimate walks of life such as sales or entertainment," he says. "If the teacher is able to channel this ability, and curb it when the timing is inappropriate, it can be useful."

This insight probably comes as no news to such self-admitted ex-class clowns as comedians turned actors Jim Carrey, Janeane Garofalo, and George Carlin (who even recorded an album called Class Clown). In a recent radio interview, Henry "the Fonz" Winkler, who played a charismatic hoodlum with a heart of gold in the long-running television series Happy Days, confessed to having been an outrageous class clown, mostly as a way of coping with dyslexia. "My grades were so bad, I threw myself a party when I got a C-minus," he joked. "Clowning around was the only thing that made school tolerable."

So, the question arises, Once a class clown, always a class clown? Dianne Maxon, a longtime elementary school teacher and principal who now works as an educational consultant, has reason to think so. While teaching in a credentialing program recently, she had an encounter with an adult class clown that left her shaking her head in wonderment.

"This guy was amazing," says Maxon. "He had all the classic class-clown symptoms. He was in his late thirties, but all his comments and interjections were so inappropriate and immature, you would've thought he was a seven-year-old.

"Even at the graduation ceremony, where each student had to make a short speech, he chose at one point to turn around and wiggle his butt at the audience!" she recalls. "He thought it was hysterical, but I doubt anyone else did."

Burr Snider is a freelance writer who formerly wrote for the San Francisco Examiner. He has also written for Cosmopolitan, Crawdaddy, Esquire, Playboy, Rolling Stone, San Francisco, and Wired.

Curtailing the Clown: How to Muzzle Mischief Makers

Here's a guide to handling the humorists in your classroom, from You Can Handle Them All.