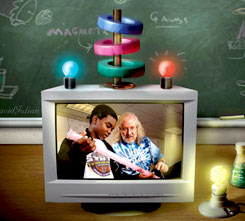 The whirring and clicking ofhomemade machines fills this middleschool classroom turned sciencemuseum, stacked high with magnetsculptures, spinning plates,and funhouse mirrors. A shopvacuum balances a beach ball onits upward air current; a humidifier, hooked up to an aquariumtank, gurgles out thick, white vaporthat students can touch andpour into cups. Two-liter sodabottles, plastic funnels, cast-ironpans, and discarded television setsdemonstrate everything from momentumto magnetism in a way that clearlycaptivates a preteen audience: above thedin rises an incessant chorus of "Ooh!"s and"Ahh!"s and the occasional delighted shriek.

It may seem chaotic, but it is purely scientific.Most of all, it is experiential learning -- the LittleShop of Physics way.

Little Shop, as it's affectionately known to locals ofFort Collins, Colorado, is a traveling hands-on physicsprogram based at Colorado State University since 1991. Runby CSU physics instructor Brian Jones, teacher-in-residenceSheila Ferguson, a teacher-in-training, and a crew of undergraduateinterns, the Little Shop of Physics visits K-12 classrooms asclose to home as Rocky Mountain High School -- and as far afield asAzerbaijan. 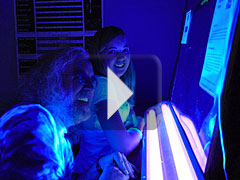 "We don't do presentations; we don't show students science," the troupe'sWeb site proclaims. "We help them do science." And with forty school visits,ten workshops for K-12 teachers, two week-long field trips, an annual openhouse event at CSU, and even a television show on a station operated by the city'sPoudre School District, Jones and the Little Shop of Physics bring hands-on scienceto more than 15,000 students per year.

"Kids do an awful lot of sitting in chairs and listening to people tell them things," saysJones, whose idea for the outreach program came from a rather fruitless day as a visitinglecturer in an eighth-grade classroom. "I don't think it's natural." After boring his charges thatmorning with a formal presentation -- even though it fizzed and popped -- he gave them a chanceto try some of the experiments themselves, and they went from blasé to beguiled in an instant,he recalls. Jones's educational mission became clear: "We make an environment where students havefreedom to interact with the world in a way that's more reasonable for them."

Physics, says Jones and the Little Shop entourage, need not be reserved for budding Einsteins;science -- real, cutting-edge science -- should not be confined to textbooks, lectures, or, as Jones puts it, "afancy-pants piece of science equipment." It can be revealed in kitchens, on baseball fields, and in the curiouseyes and hands of every child.

"Kids are scientists from the very beginning," says Cara Cummings, the 2006-07 academic year's Little Shopteacher-in-training. Hence the group's ultimate goal: to deliver learning in a way that fits a child's self-directed sensibilities. (The approach, it turns out, works pretty well with adults, too). 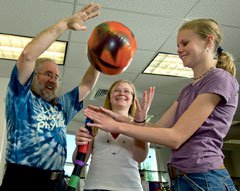 "It's not natural for kids to sit still," says Nisse Deen, a CSU senior and a Little Shop staff member for the majority ofher undergraduate career. "If they sit still, they're going to find something else to do other than pay attention." But whenkids are set loose in this particular playground, she adds, they'll find that not only is physics tremendouslyexciting, it's also "something that anybody and everybody can experience."

Each week, the devoted membersof Team LSOP rise at dawn,don their signature tie-dyeT-shirts, and pile a rotatingrepertoire of roughly 80 handcraftedphysics demonstrations (out ofmore than 200 stocked in thelab) into their van, decked out with curtains that match their attire.When they arrive at a school, the joy theybring to the classroom is more than palpable.

Little Shop is a boon for all who take part:Students learn about the principles of physics,meet a welcoming group of college-age rolemodels, and have a blast (if the constant gigglingand "Whoa, cool!" are any indication).The undergraduates beef up their physics skillsand knowledge base by designing and buildingthe experiments and teaching the concepts toothers, as well as cultivating the patience andgenuine goodwill required to hack it as a LittleShopper. Teachers welcome the respite, thechance to observe what the excitement of tactilephysics can do for their students, and theopportunity to use some of those materials andideas themselves.

"As a teacher, it gets really tiring after a dayof seeing hundreds of kids, but you can't letthat show," says Nicole Bishop, a seventh-gradescience teacher at Fort Collins's Eaton MiddleSchool and a Little Shop of Physics internshipalumna. (Her internship was supported by agrant from the Eastman Kodak Company thatexplicitly required applicants to become scienceteachers.) "Little Shop stays peppy thewhole time, and positive!" Plus, she adds, "it'sgreat when you can bring guests into the classroom.No matter who it is, the students willpay attention more." 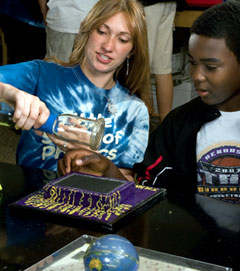 Jones sees effective teaching occurring inthree basic steps: 1) engage, 2) explore, and3) explain. First, he says, get the students' attention -- and if you need a fog machine orlight-sensitive plastic beads that turn rainbowhues to do it, go ahead. Second, set them free:Show them the material and let them play.They will discover just as much or moreabout the topic that way thanif simply told how thingswork. Finally, Jones says,there should be a "formalpiece" to followthe exploration, sothat kids can learnthe vocabularyand the specificsof the material."Too often," saysJones, "peoplejump right in to'explain.'"

The Little Shop approach,headds, is exactlywhat being a scientistis all about. "Studentsaren't going to start by knowingwhat the answer to an experiment is; if you'rea scientist, you don't know!" Jones says. "You'redoing something no one's ever done before.So, if every lab that the kids do has a right andwrong answer, it's really not a good training."

Still, teacher-in-training Cara Cummingsadmits that at the beginning of her year withLittle Shop, she took a critical perspective, asking,"Where's the learning happening? Showme what they're getting out of this." Whatshe has come to understand, Cummings says,is that "before kids can go on in science, theyneed some prior experience, some context forhow things work." Playing with magnets, forinstance, can dramatically inform students' experienceonce they acquire an understanding ofmagnetism more formally.

Jones calls this approach the developmentof a kinesthetic vocabulary, one made of textures,smells, and movements, representing atangible experience in the world, rather than asingle-sensory directive to digest information.Even if a kid can't tell you precisely what it is heor she learned from Little Shop that day, saysCummings, "it's stored in there. And it's storedin a kinesthetic way."

Please Try This at Home 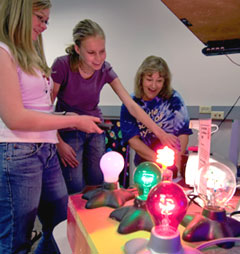 The Little Shop of Physics has been run forthe past sixteen years on a shoestring budgetof grants and donations. Supporters include the Colorado Rural Electric Association,CSU's Academic Enhancement Program,and, more recently, the Center forMulti-scale Modeling of AtmosphericProcesses (CMMAP), a CSU groupfunded by the National ScienceFoundation that is studying cloudformation and how it affects climate.Though Little Shop acceptsdonations from the schools it visits,Jones is firm in his stance thatthese remain donations only. "Ourcore principle is that no one hasto pay, ever," he says. "I will shakedown PTAs, and I will shakedown granting agencies, butnever kids."

Interestingly, Jones adds, theuse of everyday household materials -- now so integral to theLittle Shop aesthetic -- wasn't anoriginal focus. "If I had had moremoney at the beginning, Little Shopprobably would have had a very different lookto it," he says. "We didn't have money. So, instead,we just adapted stuff, and it became atheme." That theme, expressed in school visits,teacher workshops, and open houses with parentsand families, is that anyone can do this.Little Shop isn't just intellectually accessible; it'salso hands-on science at public school prices.

"A big part of the message is empowerment,"Jonesexplains."You can do this. We've done it; we'resharing this with you. It's just a mile from herewhere all this stuff was put together, and it'sbuilt out of parts you could get."

To that end, Little Shop targets as wide anaudience as it can: During the week-long 2007spring break, Little Shop joined forces withCSU's Native American Student Services tobring a vanload of undergraduates and materialsto schools and communities in the Navajoand Southern Ute reservations in Coloradoand New Mexico. Students whose elementaryschool curricula offered verylittle science, or who had no plans forcollege, were able to see science ineveryday objects -- and scientists aseveryday people.

At the Colorado School forthe Deaf and Blind, in ColoradoSprings, Little Shop membersfound deaf students so enamoredwith Voice-o-Vision -- an adaptedblack-and-white TV that graphicallydisplays sound waves createdby speaking into a microphone -- thatthey later returned to help those studentsbuild Voice-o-Visions of their own."That was the noisiest classroom I have everbeen in!" recalls teacher-in-residence SheilaFerguson. "They were really letting it all outjust to see what it looked like."

Jones says he sees this kind of empowerment -- tied to a personal "A-ha!" moment -- again and again. When Little Shop visitedLesher Middle School in April, Jones says,"Some of the kids asked, 'Who builds all thisstuff?' And I said, 'We do! We build it.' It was soamazing to them, because there's this tremendousdisconnect. Things are designed and built'elsewhere.' The idea that the people there werethe creative force behind it was really quitesomething to the kids." 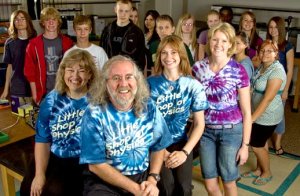 Jones's class prep includesa visit to the local market ineach destination, where hefinds inexpensive materialssuch as bottles, boxes, andtubes; he then integrates theobjects into the workshop.Teachers from Korea, forinstance, tried their hand atIron Physics Teacher, an in-classcompetition that required them to turn five everyday objects into a physicsdemonstration in a matter of minutes. 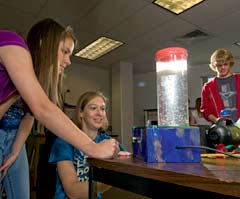 From his experience leading a workshop inChile without a translator, Jones came up withthe idea for the Language of Physics. ("Speak inPhysicist to me," he'll say to his undergraduatestudents, "and I'll critique you on your grammarand syntax.") And at St. John's College, inBelize City, Belize, he even helped professorsand undergraduates set up their own teachinglab and advised them on how they might starttheir own Little Shop of Physics.

What did Jones learn in his travels? "Teachersare some of the coolest people in the world."

As Seen on TV

Back at home in Fort Collins, Jones is somethingof a celebrity, partly because of his TVshow. Everyday Science features Jones and severalstudents exploring conceptual physics throughhands-on experiments in a studio -- hung, ofcourse, with tie-dyed fabric. Most episodes includefootage from such physics-filled venuesas an amusement park and from vehicles suchas a hot air balloon. 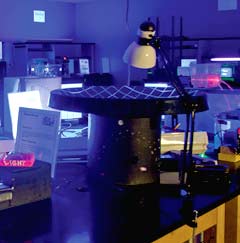 "It's our flagship show," says HerbSaperstone, a lead coordinator for the PoudreSchool District's Channel 10, a TV stationstaffed largely by high school students who participatein free after-school filming and editinginternships. "It's kid oriented, it's colorful, ithas a personality. It's become quite a phenomenonfor the community."

"There are so many other ways to earnmoney than doing what I do," says the indefatigableJones, whose days are crammed to bursting.As a full-time professor and a full-timeLittle Shopper, even his weekends are regularlyswamped with conferences, workshops, SuperScience Saturdays, and other events. "But I'mhaving so much fun!" 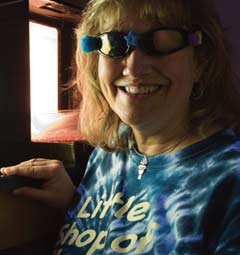 So, it seems, are the rest of the Little Shopstaff, and not only because it's gratifying tosay things like, "Hey, thanks for the liquidnitrogen" and "Have you seen that box ofrainbow 3-D glasses?" on a regular basis.

"Everyone on the crew will tell you thesame thing: This is the best job they'veever had and ever will have," says NisseDeen, her face alight. "Because everysingle day you go home feeling like youmade a difference to somebody. That isa very powerful thing."