In the spring, Jon Monastero brings his gun to school. It's a nineteenth-century replica rifle, and he fires it off on the playground.

The kids love it. 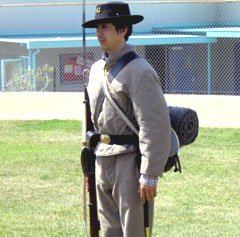 The musket demonstration is part of Monastero's living-history presentation for eighth graders, a multiday lesson on the Civil War he delivers in the guise of an army private named John Watkins.

Monastero, half of the Los Angeles-based sketch-comedy duo Ten West, taught for seven years at Santa Monica's Lincoln Middle School, five of those as an eighth-grade U.S. history teacher. He says his year-end Civil War unit kept growing into an increasingly elaborate history lesson: "I would divide the class into regiments. We would play reveille for roll call. It just kept getting bigger and bigger, until I found myself reenacting Pickett's Charge, with 180 eighth graders carrying broomsticks and flags."

When he stopped teaching to pursue an acting career full time, Monastero continued to substitute in the public schools but found it unsatisfying, especially after having been a full-time educator. Still, he wanted to continue his connection with the schools.

One day, while at a movie audition, he met a Civil War reenactor and learned more about living-history events. He further researched his character, collected period costumes and accouterments (and even started participating in reenactments himself), then designed a brochure and sent it out to public schools.

Soon, he was booking gigs. He's visited roughly twenty schools in the greater Los Angeles area during each of the two years he's offered the character presentation. 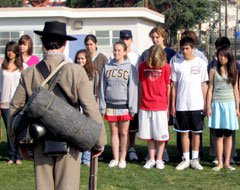 His visits range from one to three days and start with an "Ask the Soldier" question-and-answer period, which Monastero says almost always extends beyond the allotted twenty minutes and can end up filling the entire first day. "At first, the students are a little giggly," he says. "But it's incredible how quickly they get sucked in, and they end up asking really great questions."

In addition to the Q&A, Monastero brings props for interactive demonstrations: The students can see his period canteen and mess kit and sample some hardtack, and one lucky student volunteer gets to be on the receiving end of a mock bayoneting.

Monastero also has a PowerPoint presentation that focuses on teenagers in the Civil War and includes period music and Library of Congress photos of teenage soldiers. "The kids always connect right away," he says. "These photos of kids on the battlefield -- kids who are roughly their own age -- really get them to reflect on war: what it means, and what its implications and consequences are for humans."

As a finale to the unit, he takes the students outside and teaches them how to march and drill like Civil War soldiers, and at the end discharges the musket with a burst of black smoke.

Jeff Schwartz, an eighth-grade U.S. history teacher at Lincoln (where Monastero used to teach), says Private Watkins's presentation gives students "something they don't get from a textbook. Jon is a living story, and he talks about these events as if he's lived them, and it brings home the reality of the war. It's tangible history. When Jon shows up in character, in full regalia, they have the chance to really experience the things they've read about."

Monastero always lets schools choose whether they'd like him to play a Union trooper or a Confederate soldier. Nine times out of ten, he says, they choose the Southern persona. He says the character gives the teachers and students more opportunity to delve into some of the historical complexities of the war. For example, Private Watkins is a pretty likable guy, and he's also a poor farmer who does not own slaves, paradoxes that usually prompt students to ask pointed and critical questions.

"I usually get a kid to challenge me," Monastero says, "and to ask, 'Aren't you fighting for other people to keep their slaves? How can that be right?'"

"In the eighth-grade world, things are good and evil, black and white," Jeff Schwartz explains. "So, for the students to meet this Southern soldier, who is not a slave owner but is fighting in the war, it helps them to arrive at more meaningful understanding of the conflict -- to realize that it was not only about slavery but also about government and economics, and was full of complex issues."

This coming spring, Schwartz's department at Lincoln plans to bring Monastero back for a third visit. Word has traveled from last year's class, and already, Schwartz says, the new class is anticipating Private Watkins's arrival: "The new eighth graders ask, 'Is that guy gonna come and shoot the gun?' His reputation precedes him.'"

Rob Baedeker is a writer and performer living in Berkeley, California. He is a former college English instructor and the author, with the Kasper Hauser comedy group, of SkyMaul: The Catalog Parody.