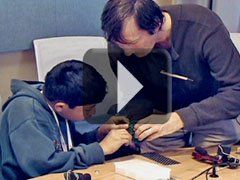 It's the kind of fierce classroom quiet that occurs when kids sink their scholastic incisors into a task that absorbs them, mind, body, and spirit. In this case, 15 middle school students from the McKinley Institute of Technology, in Redwood City, California, are learning their way around the color spectrum via a watercolor paint box. Their exercise is to fill in circles, squares, and arrows on a handout illustrating how two complementary colors always come out muddy brown when they are mixed in equal proportion.

"Complementary colors do just what they sound like; they complement each other," instructor Gabriela Silva tells her class, illustrating her point with a color wheel. For good measure, Silva repeats her comments in staccato Spanish as she sprints around the classroom, normally a McKinley science lab -- but for the moment very much a painter's studio.

Silva moves from student to student, showing them how to wet their brushes with the right amount of water as they begin to fill in the outlines with aquatint. Within minutes, class members are hunched over their desks, concentrating intently on keeping bright brushstrokes within the lines. Her goal, Silva explains later, "is to get students to think about color like an artist." She seems to be succeeding.

The students' intensity, in a school not historically known as one of the San Francisco Peninsula's centers of excellence, may seem surprising -- particularly considering that the watercolor class is taking place at 5 p.m., a time when most kids are home playing video games or hanging around with their friends. But things at McKinley are changing. Silva's class is not, in fact, one of the school's regular courses. Instead, she is a volunteer teacher in an apprenticeship-based curriculum administered by Citizen Schools, the 13-year-old Boston-based after-school program that today reaches 44 schools in seven states, including California, New York, and Texas.

Citizen Schools, which has 3,500 volunteer teachers and 400 full-time and part-time staffers and "team leaders," offers its 4,500 students one of the nation's most innovative and challenging after-school courses of study. The goal, CEO Eric Schwarz explains from Citizen Schools headquarters, aptly located in Boston's Children's Museum Building, is nothing less "than to become American education's second shift."

Beginning within the Boston public school system, Schwarz and cofounder Ned Rimer applied their Harvard School of Education degrees to improving what they agreed was a devastatingly inefficient public education system. A key Citizen Schools insight was to grab hold of what Schwarz calls "the big lever of time on task," attempting to enhance the surfeit of after-school programs, most of which, he says, "strive to simply keep kids off the streets."

From its inception, Citizen Schools has focused on kids in sixth, seventh, and particularly eighth grade because, as Schwarz suggests about middle school's "capstone year," intervention at this point is most likely "to prevent kids from voting with their feet and dropping out later on."

Funded by a fusion of private foundations and public agencies, including the Atlantic Philanthropies, AmeriCorps, the Jack Kent Cooke Foundation, the U.S. Department of Education, and others, the Citizen Schools program focuses on the 12-15 "golden hours" of after-school time per week to augment a regular school day that Schwarz describes as a remnant from the agrarian era. He is similarly critical of today's test-obsessed No Child Left Behind environment, in which, he says, "teaching and testing for basic skills have squeezed out the activities that build the whole child."

The Citizen Schools day is long, rigorous, and fun. The program begins at the end of its host school's regular class day, usually between 2:30 and 3:30 p.m. and leads with an Opening Circle. In this team-building call-and-response exercise, a Citizen Schools professional goes through the day's schedule, concluding by yelling out "Teach!" to which the students reply in unison, "Back!" Teach Back is a basic precept of Citizen Schools, shorthand for mastering a subject so thoroughly that you can teach it back to others. A similar pep-type rally signals the 6 p.m. end of the Citizen Schools day.

The first hour or so of the Citizens Schools session is spent in classrooms where students read, write, and do their homework assignments. This session -- called AIM (Aspire, Invest, Make the Grade) -- enables students to work individually with team leaders on academic areas in need of improvement. Periodic breaks and snacks of orange slices and string cheese keep adolescent blood sugar in balance.

Thursday is Exploration Day, devoted to the kinds of events and outings that try to be as entertaining as they are educational. In-school programs include presentations about nutrition, science, history, and antigang education. Exploration Day's real fun, however, comes during trips to coastal-cleanup events and visits to bowling alleys, ice-skating rinks, miniature race car tracks, and even a laser-tag arcade. The latter activity, especially, may not necessarily qualify as pure education, but the virtual reality gunfight is layered with a lecture on lasers.

Depending on available funding, individual Citizen Schools programs operate four or five days a week. McKinley's program is one of the latter; Fridays are dedicated to physical activities and exercise. In collaboration with the Redwood City YMCA, local Citizen Schools students try their hand at football, basketball, street hockey, Frisbee, and other sports programs and exercise activities.

Each week, two days are centered around apprenticeships in areas ranging from the artistic (watercolors, graphic design, recycled sculpture) to the pragmatic (healthy eating, buying a car, opening a bank account) to the downright cool (software design and robot building in programs sponsored by Google). Citizen Schools even offers an apprenticeship program called Who Wants to be a Millionaire, during which Fidelity Investments executives take students through the intricacies of the financial world.

Team leaders fulfill roles as varied as the classes and apprenticeships they assist. Jessica, a shy, young graduate medical assistant, quietly assists students as the intense Silva dominates the watercolor classroom. In contrast, Molly, another team leader, is the class's sparkplug, helping new volunteer teacher Kristie James lead her own Tuesday apprenticeship, this one about recycled sculpture. The fit is mutually satisfying. "Molly helps me learn how to teach and provide the teamwork, while I bring the craft skills," Jones says about a program in which kids scavenge plastic bottles, cardboard pizza boxes, and other throwaway objects and transform them into a fantastic array of shapes and sculptures. "The course gives us all a second chance to think about what we throw away each day."

The Citizen Schools apprenticeship programs are the real-world sweeteners that help sell the educational basics and make what is virtually a sunup-tosundown school day palatable. Apprenticeships, Schwarz says, "are designed to make learning fun, meaningful, and relevant." It is this ability to infuse the overall academic and study program with the rich possibilities of the wider professional world that makes the apprenticeship programs the crown jewels of Citizen Schools.

Each 11-week apprenticeship is capped off by what Citizen Schoolers call their WOW! events. These get-togethers in front of friends, families, and community leaders encourage students to show off their mastery of the material learned during their apprenticeships. In the first semester of 2008, for example, Gabriela Silva's watercolor apprentices exhibited and sold a number of their paintings. WOW! events are the ultimate Teach Back experience. They enable students to prove to the world that they have a deep understanding of the profession in which they have been immersed.

"Today, all kids often get is enough understanding to answer a multiple-choice test," Eric Schwarz says about the goal of WOW! events. "We want to end each apprenticeship so that kids are able to explain what they did to a group of adults, so that the adults are the ones who go, 'Wow!'"

Nazaneen Khalil-Naji-Otto, campus director of McKinley's Citizen Schools program, points out that this connectivity runs through all Citizen Schools apprenticeships. "Few normal school experiences give kids access to people whose work shows how important basic educational skills have been to their success," she says. Watercolor teacher Gabriela Silva, she explains, is a perfect example of this: a successful interior and graphic designer who makes a living doing something she loves. She has succeeded, notes Khalil-Naji-Otto, "because she mastered the basic math, science, and writing skills that enable her to compose business letters, do basic accounting, create an exciting portfolio," and, as her class is now seeing, communicate a profound understanding of the science of colors.

Khalil-Naji-Otto describes another educational pothole she sees being filled by the Citizen Schools program. "It's helpful for kids to relate positively to adults who are not their parents or teachers, especially at an age when kids are apt to tune out authority figures," she says. "Citizen Schools team leaders, she suggests, bridge that age gap "and help kids tune in to skills with more resonance than they otherwise might have."

This added connectivity is critical because so many of the kids in Citizen Schools programs live on the margins. They are the ones from single-parent households, or who have no home to go to until their mothers and fathers get off work. They also often have no one to check that homework gets done, or even that they regularly attend class. It is here that the collaboration between Citizen Schools and regular school takes on such significance.

To increase its relevance, Citizen Schools works constantly toward increased professionalism among its staff. In 2003, the organization teamed with Lesley University, of Cambridge, Massachusetts, to offer the first master's degree in what is called out-of-school-time education. During the two-year program, Citizen Schools fellows are paid to work for the host school, partner foundation, or local school district during the first half of the day. The rest of their time is spent doing the good work of Citizen Schools. The goal of the advanced degree, Eric Schwarz says, "is to keep us as the leading example in after-school learning."

McKinley principal Cheryl Bracco lauds the fellows who have worked at her school. "Their interaction with the kids and teachers made them true staff members as well as an important liaison between McKinley and Citizen Schools," she adds.

Important voices are beginning to give attention to the Citizen Schools model: In September 2008, Time magazine published a special issue on volunteerism in which Citizen Schools was singled out. In an essay signed by U.S. senators Edward Kennedy and Orrin Hatch, they praised Citizen Schools for extending the school day "so students have more time to learn and interact with professionals who will help them connect their learning to a future profession."

Improvements Beyond the Classroom

Teachers are, not surprisingly, among the biggest fans of Citizen Schools. "More homework is getting done with the program," affirms Jeffry Darrow, a science and physical education teacher at McKinley who is teaching more than 40 students who are also enrolled in the Citizen Schools program. He views its benefits going far beyond acting as homework police, ticking off his list of student improvements: "They're more interested and better behaved, and have better communications skills with each other and with teachers." Darrow, who displays Citizen Schools applications in his classes, says, "Once kids are enrolled, they take school more seriously."

Darrow's support for Citizen Schools may be eclipsed by that of his wife, Estelle, who teaches literature and language arts at McKinley. She has enlisted as a Citizen Schools volunteer teacher, teaching a culinary course and serving as a juror in a WOW! mock trial put on by students who apprenticed at a local law firm. Estelle Darrow says she believes that Citizen Schools gives kids "another set of parents, and a powerful connection between home and school."

Principal Cheryl Bracco similarly singles out the ability of the Citizen Schools program to achieve goals that extend far beyond the classroom. "Citizen Schools gets kids to envision themselves in new and different roles," Bracco says. "Students are more confident, make new friends, have higher self-esteem, and become better school citizens."