Are you kidding?" I've often been asked. "Five months on one film? I can make a film with my students over a weekend."

True enough; given a video camera, kids can spend a couple days assembling friends, cobbling together a script, shooting footage, and making quick edits. The results are rarely memorable, though. Plots often echo -- badly -- popular commercial movies. Some of the shots are good, others miserably cluttered. Skateboards and graffiti abound. Not surprisingly, student films made quickly tend to look a lot alike.

Over the span of five months, however, you can really change the way students think about film, and teach them to do something they'll be proud of. Making a film is an education for all involved, so half a school year can be a great beginning for a lifetime of visual awareness.

I offer a film workshop to high school students in San Francisco -- San Francisco Art and Film for Teenagers -- and I've found that giving the filmmaking project half a school year makes it a natural adjunct to the standard curriculum. I expose students to a variety of film styles to stimulate their minds and imaginations. I help them talk about concepts, symbolism, and visual imagery to encourage them to think and reflect.

Filmmaking is a collaboration, and it works best when everyone is free to criticize and suggest. This give-and-take, in turn, helps students learn to accept criticism and use it constructively. As they move through each stage of creating a film, kids see how much energy, effort, and dedication it takes to get a movie made -- an awareness they'll need in any field they may go into. 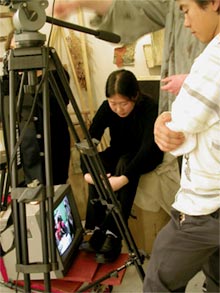 In connection with our workshop, a related program screens a classic movie every week, followed by animated discussions. Students encounter difficult (often foreign) films from the silent era on, and the discussions quickly raise the level of critical thinking. At first, students may find films like Francis Ford Coppola's Apocalypse Now or Luchino Visconti's The Leopard daunting, given what they're used to seeing, but broadening their cinematic horizons pays dividends.

To begin, it's a good idea to make sure everyone starts with a general knowledge of nuts and bolts -- fundamentals such as close-ups, medium shots, and long shots, dissolves, camera movements, and editing, and even more complicated things like intercutting and montage. But none of these things make much sense unless put into the context of good films.

Our first sessions introduce new kinds of films to encourage students to think about film. Some students are completely turned off by works they consider weird; others might be puzzled but are stimulated. Patience is crucial. We emphasize that they don't have to like something, but they need to figure out why they don't like it. This is a first step to becoming informed not only about film but about themselves as well.

We look at the openings of films. The purpose is to encourage students to see with new eyes, to understand that the opening is very important, since it often lays out the film's themes, introduces its style, and prepares the viewer for what's ahead.

A film like Citizen Kane, for example, can be very helpful. Students are encouraged to notice precise details and look for their significance -- the way, for instance, in the beginning, the camera moves at a steady speed and the light in the window of Kane's castle remains in the same place through a series of shots. Detail after detail has significance. Also, this film is a great example of nonlinear narrative. The basic story is laid out in the beginning, after which it is shown from many points of view.

To teach film composition, I like to start with still photographs. By asking students what they think makes a photograph strong, you get them to look at the film frame more critically. Then you can introduce the useful tool of hand-sketched storyboards by letting students use pencil to reproduce shots from an especially powerful film scene. It's easier today to show students how storyboards are used in film. For example, the DVD of Ridley Scott's The Duellists, an intriguing story that takes place during the Napoleonic wars, features Scott's storyboards and compares them with actual sequences in the film.

Some of these steps may seem arduous to kids who want to make a film now. But details matter in film, and thinking, talking, and reflecting need to continue throughout the process. As students see more and become more articulate, their ambitions increase.

Credit: Dominic Santos
Students pin up hand-drawn story boards to arrange the sequence of shots for a scene before they discuss how to make improvements. 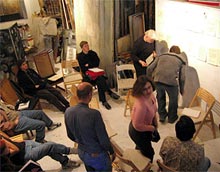 Credit: Dominic Santos
Students pin up hand-drawn story boards to arrange the sequence of shots for a scene before they discuss how to make improvements.

It's crucial to help students understand that stories and subjects for film don't have to come from other films but exist in their own lives -- a cinematic version of the old literary advice "Write what you know." We ask students to bring in two or three incidents from their week that they think could be developed into a short film. This tends to elicit the usual complaint: "Nothing interesting happens to me." But we insist. Often, other students see the story possibilities in incidents that the teller assumes are boring.

We encourage students to eavesdrop on city buses, or at cafes, or at school, and bring in bits of dialogue they've overheard. With this exercise, you can start to get a clearer idea of who might have a knack for writing. Another important assignment asks students to come up with five things they care about genuinely -- five themes. This exercise leads students to reflect on life, and on their own lives in particular. It's often the beginning of remarkable personal projects.

For any teacher, of course, a reality check is important. The first, glaring fact is that young people don't have control over their time, so it's a challenge to coordinate schedules among film crew members. The second problem is that though students generally have a lot of enthusiasm for films, they have little sense of the tremendous effort and persistence filmmaking requires. Getting them to commit to a demanding process can be difficult, to say the least. The third big obstacle is that movie collaboration thrives on daily critical dialogue, and young people can be wildly sensitive to criticism. All this needs to be taken into consideration before a group film is planned.

Obviously, students can grow impatient with so much preliminary work. But for the making of a film to be part of education, the project has to be treated in the same methodical way a science project or a class in creative writing is approached. You wouldn't ask students to demonstrate a chemical reaction without studying the chemicals involved or ask them to write without asking them to read great writers. And you shouldn't ask kids to make a film without asking them to see notable movies and understand the visual vocabulary and techniques that go into creating them.

By the time your student directors call out "Action!" they will already know the course of action they themselves have embarked upon.

Ronald Chase, creator of San Francisco Art & Film for Teenagers, has been a filmmaker for thirty years, as well as a painter and photographer. His work can be viewed at his Web site. To view student films, visit www.filmworkshopsf.org.

We use Pro-Max, but look around. Consult DV or Filmmaker magazine. Or do a Web search for DV Resources (we use www.2-pop.com).

Firewire-capable Mac G5 or iMac ($1,800-$3,000) PC with firewire capacity (make sure your computer includes a DVD burner and separate hard drives to store your video material).

Final Cut Pro, preferably with a Mac
Other programs: Adobe Premiere with a PC, Sony Vegas, Pinnacle Liquid DV, and Avid free (all students should look into Avid free).