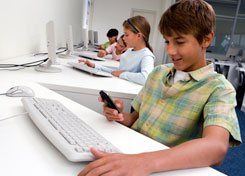 Query most secondary school teachers on the subject of cell phones, and you're likely to get an impassioned rant about the device's insidious ability to provoke distraction in the classroom. All that giggly sub rosa texting not only robs students of attentiveness, they say, but also presents an inveterate disciplinary problem. It's why most school districts have strict cell phone policies, and most teachers are grateful for it.

But some forward-looking educators have begun to push the subversive idea that the high tech wizardry of mobile phones can be a powerful multipurpose mechanism for learning. Podcasts, video interviews, polling, quizzes, even homework assignments, can all be accomplished via cell phone to enhance students' learning experience, while the phone can also act as a versatile electronic aid to the teacher.

"Kids mostly see their cell phones as a social toy, not as a learning instrument," says Liz Kolb, adjunct professor at Madonna University, in Lavonia, Michigan, and author of Toys to Tools: Connecting Student Cell Phones to Education. "But if you can get them thinking of cells as an anytime, anywhere, Swiss Army knife-type data-collection tool, it can open up a whole new world. If their phones work so well for them outside the classroom, we need to get them thinking about bringing these tech tools inside and putting them to good use."

Kolb cites the example of a student studying ecosystems in science class. When he goes on spring break, his teacher can instruct him to take pictures with his cell phone camera of the various insects he encounters and upload them to an Internet site such as Flickr. When he comes back to class, everyone can share his pictures and discuss his findings.

Moreover, by downloading data to schools' Web sites, kids don't even have to bring their cells to class. The phone can accomplish much of what a computer can do, even while it stays at home. "In schools, we're saying no to cell phones when instead we should be telling students that this thing they use to text their friends could actually become something that's helpful in the twenty-first-century job force," says Kolb. "Instead of banning their use, let's put structures around them and create learning activities with them."

This could prove a hard sell to teachers who see cells only as a bane to good order. "Unless they see the instructional potential, teachers feel the same way about cells as they did about television way back when -- that it's just a distraction," says Hall Davidson, a director of the Discovery Educator Network, an online learning community dedicated to digital media. "But there's a shift going on, and once teachers realize the immediate impact of texting, plus all the other things you can do with a cell phone, more schools will come around and see that this is a really good, really serious tool."

After all, adds Davidson, just about every kid you know has one, and it doesn't make sense to squander their potential by prohibiting them in school. "About the only organizations that have a ban on cell phones anymore are the Taliban and your local high school," he says. "Anything that plays media can be used instructionally, so we shouldn't deprive our students of their own personal messengers, photo storage units, video studios, and radio stations right in their pockets."