Driving to the airport at about 3:45 A.M., I was struck by the emptiness of Maine's southbound U.S. Route 295. In fact, there were several times when I could see no other vehicles on the road -- no headlights approaching, no taillights receding. It reminded me of how it had been when I was practicing for my first driver's license test, back in 1971. Nowadays, such openness is a rarity, be it at 3:45 A.M. or 3:45 P.M., be it a Sunday morning or a Wednesday afternoon. There are just so many people, so many cars. 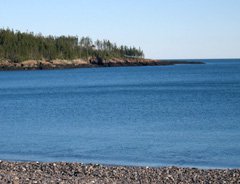 There is a traditional Maine story that has an out-of-stater in a red sports car stopping to ask directions of a farmer in his field. "Say, old-timer," the young fellow asks, "can you tell me how to get to Mattawamkeag?" After several false starts and pauses for thought, the farmer ultimately replies, "Well, young fella, come to think of it, ya can't get thair from heah." Sometimes, the Maine Turnpike and Route 1 seem that way -- trying to go from Brunswick to Camden along the coast in midsummer can be an exercise in frustration, with progress ranging from slow to zero. There's just so much traffic.

So, this got me to thinking. Maine's network of roads is similar in many ways to the network that delivers Internet content to classrooms across the country. Both have the stated purpose of facilitating the movement of content, of stuff, and both have times of congestion and times of free-flowing openness. Both provide, when they function as advertised, access to wonderful things, be it Fort Edgecomb, located just off Route 1, north across the bridge from Wiscasset, or the marvelous QuickTime virtual reality (QTVR) panoramas available at Panoramas.dk.

But either network can be rendered ineffective in times of severe congestion. In either case, such a situation means one might as well stay at home. In either case, the richness of your experience and the variety of content available to you becomes limited by an inability to get there from here.

In terms of a Maine vacation, such congestion might simply mean that you enjoy the Bath-Brunswick area a little longer, and head north later in the afternoon, but in the classroom the stakes become higher. The reliability of high-speed network access can mean the difference between students being able to effectively use a digital resource to help them understand a mathematical concept, communicate with peers across the classroom, school, school district, or continent, or share their writing with the rest of the world, or being unable to do so.

So, here's my question -- and it is a simple one: How's the network at your school? But the follow-up questions become a little more convoluted. Is it zippy and consistent? Is it reliable, always there when you need it? Or are there times when it is less than speedy, times when you and the kids give up in frustration, having failed to get to the Web-based resources you had intended to use?

I look forward to hearing your stories of moving and stalling, and, more importantly, to hearing about the impact something as conceptually simple and effectively foundational as high-speed network access has had on teaching and learning in your classroom, school, or district.