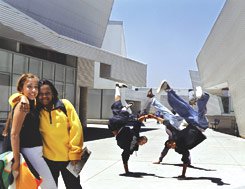 Earlier this year, when Southern California-based architect Thom Mayne was awarded the prestigious Pritzker Architecture Prize, one of the examples of his exceptional work was Diamond Ranch High School, in Pomona, California. The school campus, which critics have called "a landmark" and "ingenious," helped bring international attention to Mayne and his firm, Morphosis. Recently, I made a pilgrimage to Diamond Ranch to try to understand what all the buzz, praise, and news are about.

As I drove up a steep hill toward the school, I saw a cluster of futuristic buildings. The big, oddly shaped gray structures stretch across a wide hillside, one of those pristine expanses that at another time and in another place might have been graded for McMansions.

I tried to imagine what it feels like for an entering freshman: intimidating, dramatic, different, and, frankly, cool. Very cool. Walls are made of gray concrete and corrugated metal. Roofs jut out at odd angles. Nothing about the place says "high school." Instead, it looks like an exhibition of colossal modern sculpture.

When the bell rings, 2,000 students pour through the central walkway into surroundings as different inside as they are outside. Classrooms have unexpected shapes (one is a trapezoid), and many conference rooms are triangular. It's as if the ninety-degree angle has vanished from geometry. The gymnasium, with soaring glass windows, is four stories tall. The imposing buildings and sophisticated design seem more appropriate for at least a junior college, or even a university. And why not? I wondered. But can design make a difference? Can extraordinary, unique architecture influence teenage students with the blasé blues?

Diamond Ranch, which opened six years ago (two years after the original campus was established), is Mayne's pivotal work. It is certainly one of his most idealistic and heartfelt. The architect, a rangy, restless iconoclast, worries about the status of American education. His approach to school design is both utopian and slightly subversive. A dyslexic, he knows firsthand the importance of going beyond standard math and English to grasp the underlying concepts and cultures that make learning matter. Just as he challenges the accepted tenets of school design, he wants young people to challenge authority. He believes architecture can do that. Any biologist will tell you, he says: If you want to change behavior, you change the environment.

"Someone has to sit down and rethink what a bloody school is," he adds with obvious frustration. Mayne decries the typical California high school as representing the freight-train model of creativity: classrooms like flat boxcars lined up one after the other, their main virtue being that they are resistant to earthquakes.

Few school districts dare to experiment, says Patrick Leier, superintendent of the Pomona Unified School District. Most averse to change and innovation in architecture, he adds, are middle- and upper-middle-class districts. Only those at the top of the pyramid, determined to keep their edge, and those in low-income districts (those more open to change because of both internal and external pressure to close the achievement gap) are willing, Leier says, "to try something out of the box." Diamond Ranch -- 30 percent Hispanic, 22 percent Caucasian, 19 percent Asian American, 15 percent African American, and the rest "other" -- is decidedly working class.

Pomona helped set the stage for a new approach, making a deal to let the school district buy a seventy-acre parcel of land for $1. The bill for stabilizing the slope of the hill to avoid the kind of slides that beset Southern California last winter was $11.2 million. Leier held a design competition, received twenty-nine submissions, and selected Mayne's. The school cost $31 million to build (in addition to $12 million in soil work), an amount allotted by the state.

Architecture Week described the school as "a rare example of architecture that not only inspires but also educates" and discerned that it is "a place where social conscience coexists comfortably with creativity and imagination. "With its otherworldly contours, the school has been used as a setting in commercials for BMW, Mercedes-Benz, and Volvo, and it can be seen in the movies Orange County and The Cell. In fact, in its career as a film and TV star so far (and as a venue for soccer tournaments and the like), Diamond Ranch has made $400,000. This definitely beats bake sales. "For the school," said Mayne, "serving as a site for filmmakers was a perfect way of giving status." 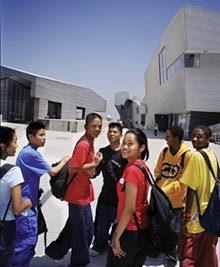 It's obvious the school is a favorite of critics and art directors, but what about the students and teachers?

"A lot of people call it the Penitentiary," one student blurts out between classes. The Prison on the Hill, says another, is also a popular epithet. Part of that perception, Leier explains, is the unhappy result of budget cuts: The original plans for $2 million worth of landscaping and shade trees were eliminated. The result, while presenting a photogenic monochrome behind gleaming automobiles, is an unsoftened expanse of concrete that kids complain is more jail-like than jewel-like. Despite the school's unflattering nicknames, however, most students and teachers seem to like it. For some, the slice of celebrity it has attained matters more than landscaping. "It's cool -- it's in commercials," says senior Melissa Burnett. "It's in the movies, too," adds her friend Alyssa Maurry.

"The school is unique," offers tenth grader Nichole Loree. "That makes the people who go here unique." In a very few words, she is summing up just what Mayne had in mind.

"Anytime something is unusual and causes discussion, it is good," says physics teacher Michael Curtis, who uses the eccentric contours of the architecture to teach forces and structure. "I just wish it had more color," he adds, echoing a common student complaint. Asked about adding reds and blues, Mayne is politely dismissive: "That's been done before." Pretty doesn't interest him, he says, adding, "I'm not an easy architect." His intent, he contends, was to design "an academic environment that was other. If it's slightly uncomfortable, that's part of the institution."

At least a few students get what Mayne intends. "There are so many things to look at on campus and contemplate, I don't think four years here could untangle it all," says Darren Fishell, editor of the school newspaper, The Ink Panther. Fishell studied the building and wrote about it for the paper, but he recognizes that most students don't spend a lot of time thinking about the radical-looking structures." Most kids look at it as something that is unorthodox," he says, "but not at the meaning behind it." 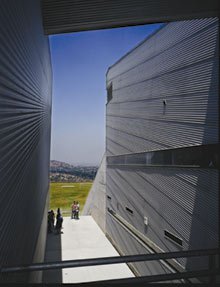 Between classes, students rush through the long and narrow walkway that architectural writers call "a meandering canyon" or a "paseo." Students quickly found a more significant name: "Panther Path," after the school mascot. It's only a name, but the difference tells a lot about the way the critics and the students view the same structure. Mayne designed the thoroughfare to force students to encounter one another, as he says, "cheek by jowl."

"We made it purposely narrow," he points out. "We wanted it really cosmopolitan. We wanted that connection so that they could intensify and disperse. "Though it's hard to measure such things, the connection seems to work. Stand outside during lunchtime and it's obvious: There seem to be more mixed-race friendships here than at many other California high schools. Maybe that's the result of the enforced closeness in the walkway, or maybe it's because the school is relatively new and has no history of racial cliques. So far, however, whatever the reason, self-segregation is less so than in other schools.

Principal Monica Principe sees other positive effects. The singular appearance of the campus, she says, "gives the students a little more school pride." In the era of the Internet, video games, and skateboard parks, building that quality, she said, can be difficult.

Principe appreciates the uniqueness of the building, but she also has had to adapt to it and make it adapt to the task at hand. Diamond Ranch has become its own attraction for the kids, though. With its angles and concrete, the school may lack "that warm fuzzy feeling," but, she adds, "you can create it with the people on campus. People in the building make it what it is. Not the building itself."

Credit: Dewey Nicks
Street Smarts: Like a Tuscan hill town, the school offers students an abundance of places that the architect calls 'cosmopolitan,' to encourage casual congregation and community. 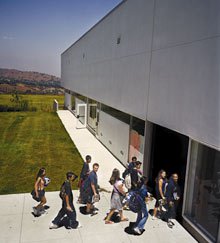 Credit: Dewey Nicks
Street Smarts: Like a Tuscan hill town, the school offers students an abundance of places that the architect calls 'cosmopolitan,' to encourage casual congregation and community.

For all its novelty, Diamond Ranch is still a public school, not all that much different underneath its chic exterior. Despite the dramatic angles and iconoclastic designs, the minute hand on the clock still seems to move too slowly. Many students are attentive; others fold their heads into their arms and doze off in class. On a locker room door, a taped-up sign reads, "Mr. Tolmachoff Period Class 3, Dress and Go to Gym for Basketball. "As students file by, the door clunks shut, making the same heavy, institutional sound it does at schools that do not make architectural critics swoon.

All buildings have shakedown periods, times when inhabitants adjust to their new surroundings and also change them, creating a transformation studied in Stewart Brand's book How Buildings Learn. At Diamond Ranch, those changes were significant. Mayne designed classrooms with long windows and glass doors overlooking courtyards and the city below. Spiritually uplifting, perhaps, but not compatible with the use of such teaching tools as LCD screens. So now, six years into the evolution of a working high school,many of those windows are covered with black paper strips, green and gray paper circles, posters, even T-shirts. Mayne's belief in openness and transparency interfered with teachers' efforts to teach. A cumulus cloud -- or a single student sauntering by -- can be a major distraction.

"The campus has worked very well," Superintendent Leier admits, "just not exactly as we thought it would."

Carol Pogash is a former writer for the San Francisco Examiner and Forbes ASAP whose stories frequently appear in the New York Times. Write to letters@edutopia.org.